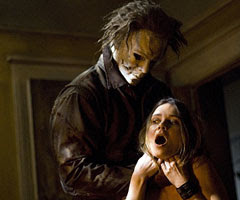 "Rob Zombie's Halloween"
Director: Rob Zombie
Fien Print Rating (Out of 100): 24
In a Nutshell: John Carpenter's "Halloween" is a genre masterpiece characterized almost entirely by insinuation -- faceless shapes in the shadows, implicating point-of-view shots, a minimalist insistent soundtrack. It's one of the scariest movies I've ever seen, but by today's standards, it could probably get a PG-13 rating.

To remake this classic of insinuation, Dimension naturally enlisted Rob Zombie, a director whose instincts couldn't possibly run more counter to the aesthetic of Carpenter's original. I've seen Zombie's "House of 1000 Corpses" and "The Devil's Rejects" and the nicest thing I can say about his body of work is that Rob Zombie has never insinuated a darned thing. Zombie's films are as raw, nasty, sloppy and obscene as he wants. He doesn't tip-toe or pussyfoot.

I didn't like either of Zombie's first two films, but "The Devil's Rejects" was a notable step forward from "Corpses," which was the work of an inept amateur. The qualitative leap between first and second features had me wanting to see Zombie's "Halloween" against my better judgment. I knew Zombie's version wasn't going to be Carpenter's, which would probably annoy me. But what I hoped was that working within the structure of a classic, Zombie's lesser narrative tendencies might be tamed and he might make an interesting and distinctive alternative text.

Follow through after the bump to see if I thought Zombie succeeded (the Fien Print rating probably ought to give some indication).

The sad reality is that Zombie's "Halloween" falls short not for tinkering with Carpenter's classic, but for not tinkering enough. Zombie's never been much of a storyteller and he uses Carpenter's original script as a crutch as he distinctly runs out of energy in his film's second half.

For around 40 minutes, "Halloween" is a near-glorious mess, as Zombie takes the better part of an hour to do what Carpenter did in five minutes -- He delves deeply into the mythology of Michael Myers, showing the events that pushed the kid (Daeg Faerch) build up to his first Halloween night massacre. Zombie crafts a mythology that couldn't be more predictable if you've seen either of his first films. The character practically sings his litany of misfortunes like a Jet belting his heart out to Officer Kruptke ("I've got a social disease!"). It's pretty silly stuff -- Zombie's profane idea of dialogue makes all of his characters sound like the inbred offspring of David Mamet low-lifes (they're not as literate, but they do use profanity as punctuation) -- but it's also occasionally disturbing and fresh.

Then, after 15 years of incarceration -- during which time The State really ought to have prevented Michael from having extensive use of the weight room -- Michael escapes. That's when Zombie checks out. You figure his pitch to Bob Weinstein probably didn't get much deeper than Michael's backstory, so after going his own direction for his first act, Zombie suddenly starts ripping Carpenter off left and right. He's stealing characters, camera set-ups and punchlines, as well as every murderous beat of Michael's killing spree. And guess what? Zombie's never been a slasher director previously (both "Corpses" and "Rejects" are from a very different genre) and as a slasher director, he sucks. I just saw the movie an hour ago and I don't remember a single creative active of violence from its second act. This Michael's M.O. is overkill -- whether he stabs or chokes or bludgeons, the only thing that matters is that he does it for long enough to yield 30 or 40 seconds of screaming, followed by protracted Victim Crawls. Michael leaves each of his soon-to-be-corpses with just enough energy to slide across the floor, leaving a trail of blood as they grasp at the horizon for futile salvation. Neither the characters nor the killings in the movie's second half are even slightly memorable and the movie becomes increasingly unpleasant (and it starts off at a pretty unpleasant spot).

I'm not sure if there was a way Zombie could have rescued that film's second half, frankly. The dedication of time to Michael's backstory isn't a bad idea except for this most simple of facts: The idea of Michael Myers growing up in a perfect, white picket fence version of suburbia, somehow inexplicably developing into a soulless killer and returning to tear shit up and get an inexplicable revenge? That's creepy. The idea of Michael Myers grown up in a Rob Zombie-approved hillbilly hell, developing into a serial killer familiar to anybody who has ever looked at a case study (or Ed Gein or a dozen other famous wack-jobs) and returning to his Rob Zombie-approved hillbilly hell for one particularly reason? That's not creepy at all. It's banal and predictable. Carpenter's unmotivated Michael Myers ("He was just the quiet kid next door") may not be a psychologically rigorous as Zombie's ("Well, yeah, his mother was a tramp, his step-dad was an abusive drunk, he got picked on in school and he liked to kill and skin animals... I guess probably we might have seen this coming"), but it's scarier.

What else to say about this new "Halloween"? Well, Zombie likes to get everybody to deliver identically shrill and screechy performances, so it's no wonder his whole ensemble -- Wife Sheri Moon Zombie, William Forsythe, Bill Moseley, Leslie Easterbrook, Sid Haig and Ken Foree -- shows up, along with logical additions like Brad Dourif and Danny Trejo. Among the younger cast members, famous kiddie runaway Scout Taylor-Compton is no more annoying than Jamie Lee Curtis in the original and ditto with her slutty teen friends. There's something more than a little distressing about how Zombie films Hanna Hall's naked body, but I guess the actress best known as Young Jenny from "Forrest Gump" had a little image adjustment in mind. Oh and Malcolm McDowell, such seemingly perfect casting as Dr. Loomis, has never been forced to deliver worse dialogue, which is saying something for a guy who starred in "Caligula."

What the heck was I expecting?!?!? I mean, this is a movie called "Halloween" that they released in late August out of fear of the "Saw" franchise!