MovieWatch: "Into the Wild" 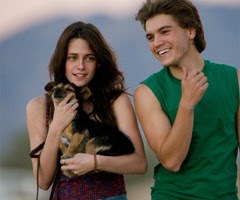 "Into the Wild"
Director: Sean Penn
Fien Print Rating (Out of 100): 62 (but I'm wavering up *and* down)
In a Nutshell: While waiting for a different movie this afternoon ("The Kingdom," opinion pending), I stopped by a Borders and, since it was in the 3-for-2 stack and since I was able to easily secure another two and since I barely have any time to read *anything* anymore, I grabbed a copy of Jon Krakauer's "Into the Wild."

Of course, since my non-vacation reading pace is akin to a mentally stunted gerbil (bet you didn't know they were literate at all...), I don't have the time to read the book before reviewing the movie (if I'd been doing an actual journalistic feature on "Into the Wild," I'd surely have done my due diligence). Thus, this review is just of my reactions to the movie, which is probably what a movie review ought to be anyway, eh?

The short version of my feelings: Penn's film infuriatingly wants to have it both ways. The director wants to turn McCandless into a Christ-like figure (note the already notorious nude scene in which Penn depicts star Emile Hirsch in the Full Monty, arms outstretched) while also backtracking at the end into a "Yes, what he did was an awesome way to spend two years, a way that I wish I could spend two years, a way you should spend two years if you're COOL... But don't do this at home, because it's bad" conclusion. Somebody's gotta call bullshit on Penn here.

Follow through after the bump for my full review... Warning, though, it's gonna include spoilers, some of the "Well duh" variety.

Granted that Chris McCandless seems to have had an awful childhood -- upper-middle-class upbringing, complete with all of its advantages and trappings aside -- but I never found myself viewing him as anything other than an arrogant ass with a classic 21-year-old's misunderstanding of Thoreau, of Tolstoy, of Pasternak. But Penn buys totally into Chris' view of the world, treating his written and spoken words as gospel, with both voice over and moments where his writing either animates across the screen or is shown in tight close-up as every pearl of wisdom is being transcribed. Accompanied by the solemn moaning of Eddie Vedder at his most earnest (which has to be just about the most earnest that any human being in history has ever been), the filmmaker offers no hints that Chris' choices are vaguely questionable. Even when Penn gives voice to Chris' cruelly abandoned sister Carine (Jena Malone), her thoughts are all weirdly understanding, weirdly robotic, weirdly retroactive and they're heard over Eric Gautier's lovely cinematography, which treats Chris' extreme lifestyle like it's nothing more than the most beautifully shot Mountain Dew commercial ever.

The film's point-of-view is a muddle. Usually, Penn just gives Chris the benefit of the doubt, treating his increasingly wiry physique like that of an absolute Vitruvian man, mens sana in corpore sano, on faith. But every once in a while, Penn sees things that his main character clearly wouldn't have noticed. He notices the underlying sadness in the way the film's male adults treat Chris. Brian Dierker's Rainey, Vince Vaughn's Wayne and particularly Hal Holbrook's Ron all love Chris, but know they can't save him.

Nowhere was I more perplexed than by Penn's depiction of Los Angeles, where Chris has a very brief. After treating hitchhiking and rural wandering as the safest possible way to see the country, Penn goes wildly overboard in depicting the threat of urban life. On one hand, you have LA's Skid Row, where Penn captures the film's only minority faces in the most threatening way possible. Compare Penn's portrayal of black city poverty to the nobility of white rural poverty and it's nearly laughable. But Penn isn't satisfied there, he also wants to show LA's downtown urban hipsters (Did LA have downtown urban hipsters in 1992?) as soulless ghouls too. I think these scenes are supposed to rely on Chris' actual point-of-view (hence the images where he sees his alternate self as a fellow hipster), but it's one of several moments where Penn's storytelling technique is just all over the place.

I hope you're sensing my ambivalence here. As I write this, I realize that many of the things that irked me within the movie were products of my distaste for main character. But it's also a distaste for the way the main character was being presented by a filmmaker who ought to be wiser, more mature, more reflective. After launching his directing career with three relatively introspective dramas, though, Penn is oddly extrospective (is that a word?) when it comes to McCandless. He just accepts the most superficial view of the guy, attempting to neither pity or understand him, just to embrace him.

Hirsch is treated as an idealistic vessel and as good as he is, I couldn't view the performance as anything other than "A series of things Sean Penn made Emile Hirsch do," from whitewater rafting to running up California mountains to dropping his weight down to a dangerous point that no piece of popular entertainment should ever require. Penn, who has always been an actors' director, gets fine work out of all of his performers, especially Holbrook, who has to be due for an honorary Oscar nomination of some type.

I'm just having a hard time evaluating this movie. If Sean Penn thinks Chris McCandless is worthy of only-slightly-cautionary adulation and I think he was probably more worthy of more of a "Grizzly Man"-style approach, am I approaching "Into the Wild" with clear eyes? Probably not. But I'm a kid who loved "My Side of the Mountain" growing up. "Easy Rider" remains one of my favorite films. Like just about every other male of a particular political incarnation, I was temporarily moved by "On the Road." Maybe there's just a certain amount of pragmatism I require from my stories of youthful rebellion and wish that Penn had been similarly pragmatic over the 145 minutes of his film.

I get the feeling I could talk in circles for hours about this one. But I've got to write up "The Kingdom" at some point...