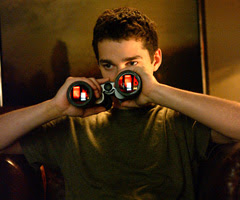 "Disturbia"
Director: D.J. Caruso
Fien Print Rating (Out of 100): 56
In a Nutshell: How to explain the late-spring surprise success of "Disturbia"? Do we access, as Steve Spielberg seems to have, that Shia LaBeouf is a massive star? Do we figure that PG-13 thrillers are the new R-rated torture porn when it comes to young viewers? Do we somehow credit director D.J. Caruso and therefore assume that his three previous films ("Two for the Money," "Taking Lives" and "The Salton Sea") were just flukes of awfulness? Do we credit the DreamWorks marketing department and some well-placed ads? Or do we just blame Hollywood for producing so much tripe this spring that audiences were parched for even moderate signs of professionalism?

It's a bit of a mystery to me, because I'm late to the "Disturbia" party, but what I found was a so-so movie with around 30 minutes of clever suspense trappings stuck in the middle somewhere. The progression from voyeuristic thriller to straight-up slasher film comes with nearly 20 minutes to go and pretty well betrays what came before. Here I'll point out that "Disturbia" co-writer Carl Ellsworth's "Red Eye" had the identical problem. The guy has a gift for setting up Hitchcockian wackiness, but no sense of follow-through.

Follow after the bump for few more thoughts of "Disturbia," hopefully written before I have to rush off to see "Eastern Promises."

I know I'm all literal and stuff, but the entire premise of "Disturbia" rings a bit off for me, because what kind of judge is going to think that the best way to punish a white, upper-middle-class suburban kid on the verge of summer vacation is with three months of isolation and containment, particularly in a post-Columbine age. The idea that a judge would opt to cultivate an under-aged loner as a sign of leniency (rather than, you know, imposing three months of community service?) loses me. Immediately.

That's too bad, because the movie's initial psychological hook is rather powerful. A young man feels the responsibility for his father's death and becomes a troubled misfit, much to the sadness of his mother (Carrie-Anne Moss), who doesn't know whether to blame her son for costing her time with the man she loved. The boy gets his house-arrest and becomes a crazed shut-in and begins imagining things, which leads him to doubt his own sanity when he comes to suspect that his neighbor (David Morse) might have killed somebody.

No. Wait. That's not *quite* the premise, because none of those darker things are explored at ALL. If they didn't occasionally mention the kid's dead dad, he wouldn't factor in the story or the character motivations at all. And the full extent of his shut-in wackiness is building a stack of Twinkies, because in the 21st century with video games and the Internet and 50-inch flat panel TVs, it really takes more than a few days to start going stir-crazy. And, worst of all, there's never any ambiguity about the neighbor's degree of wickedness. Yes, the template was stolen from "Rear Window," but in "Rear Window" you spend a lot more time wondering if L.B. Jefferies (James Stewart) is imagining things and debating whether or not the man across the way (Raymond Burr) is a killer. In "Disturbia"? No room for gray.

And even though the visual template -- Peeping Tom POVs and whatnot -- were also lifted from "Rear Window," Caruso decides to cheat at inappropriate times. If you're going to go in for the Hitchcockian POV as a gimmick, don't abandon your conceit to be a perv. Shia The Beef and his barely named Asian buddy (Aaron Yoo) are checking out the hottie next door (Sarah Roemer) swimming in the pool and the shot goes from a standard POV shot of the characters ogling the neighbor (from an appropriate distance, as they have yet to use binoculars) to a far tighter and more intrusive shot of the young actress' butt, wet from the pool. At that point, the POV is no longer that of the cooped up character so much as the director checking out a nubile 22-year-old actress. Weak, buddy. There are also several entirely inappropriate cut-always later in the movie where we see things the main character couldn't have seen just to fill in gaps in the narrative, gaps that better storytelling could have filled in without the cheating.

Beyond the failure to suggest any amount of internal turmoil at all, The Beef's performance isn't bad, nor is leading lady Roemer, whose interchangeability with Blake Lively distracted me on several occasions. I don't know if I'm supposed to blame Morse for his character's one-dimensionality -- I think not, since the actor is plenty capable of crafting the right sort of is-he-or-isn't-he-evil character, he just wasn't asked to do it here.

As relatively painless as "Disturbia" was -- it's not an awful movie, just one that squanders its potential -- the sense that the entire movie, every freakin' second of it, was based lifted from other movies never left me.