The Emmys Happen, So I React 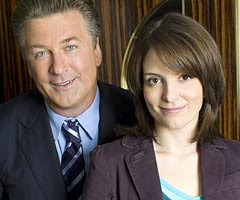 Ugh. I suppose I have to talk about the Emmys, don't I? Grumble. That's the problem with serving so many darned masters.

Then check out Zap2it's minute-by-minute coverage of the ceremony (I wrote the second half, with Rick Porter doing the first half) HERE...

Then check out some basic post-Emmy award analysis HERE...

And finally, if you're *really* bored, check out a story on Emmy Dark Horses I wrote for the LA Times' award site The Envelope. Yeah, my picks were almost all wrong (I got Sally Field, at least) and they misspelled my last name (We work for the same company, guys!!!!), but it's HERE...

Is that not enough? Fine, then... Follow through after the bump for my thoughts on the show itself including the show's Five Most Awkward Moments. Hopefully I'll be short and sweet, but probably (knowing me) not...

And overseeing the whole thing was Ryan Seacrest. As much as I joke about Seacrest all through "American Idol" season and as much as I lament the continued absence of Brian Dunkleman, Seacrest is a fine reality TV host. I've watched enough of "The Contender" or "On the Lot" to know that Seacrest may not be Jeff Probst or Phil Keoghan, but he's sure better than Sugar Ray Leonard and Arianna Costa. But Seacrest isn't the man you want to host an award show of this caliber, not when you have Conan O'Brien, Ellen DeGeneres, Hugh Laurie, Stewart and Colbert and at least a dozen other superior candidates sitting in the crowd. Although Seacrest swore up and down to reporters that he'd leave the comedy for the comedy pros, he actually tried selling punchlines and not just the lame one-liners he does on "Idol." Pacing the stage and clapping his hands together, Seacrest did something that all-too-closely resembled a monologue, only it wasn't funny. The biggest laugh came from the awkwardness of Seacrest's interaction with former alleged flame Teri Hatcher. Yawn.

That wasn't even *close* to being the most awkward moment of the night, the moment that had me shaking me head in shame for most involved.

1)Opening "Family Guy" song, when Stewie and Brian sing about Isaiah Washington and the director cuts to T.R. Knight. Ugh.

2)The announcer pronounces Katherine Heigl's last name "Hi-Jel." Now that's just ridiculous, for a show of this stature, for an announcer to mispronounce an eventual winner's name, to mispronounce the name of a woman who starred in the year's biggest comedy hit. But things got worse first when the camera caught Heigl telling her co-presenter that her name had been pronounced wrong and then when she went up and, before doing her presenting duties, corrected the announcer. Discretion is just the better part of valor.

4)The whole event was feeling amateurish and then Robert Duvall, one of the greatest actors EVER gets on stage to accept the first Emmy of his career. He talks for 20 seconds and the music begins playing. That's bad, but surely they have some place better to go, right? Wrong. It's Seacrest talking to a blogger in the crowd. And then he makes a lame-o Vanessa Anne Hudgens joke. I'm all for people passing around her nudie pictures like dirty, dirty currency, but did we really need to make jokes about her humiliation on a widely watched award telecast? Boo.

5)The standing ovation for CurrentTV. A bunch of Hollywood fakes applauding for the recognition of a cable network they've never watched just because Al Gore happens to be in the house. The same Al Gore whose wife would have put most of them out of business for being smutty? Yeah. Good times.

5a)Those three technical glitches where the audio cut out and the camera went up to the rafters. If they were actually glitches, they're awkward. If they were FOX's way of censoring people who said naughty words, they were just sloppy.

Awards I'm Happy About: "30 Rock," Jamie Pressly (even if Jenna Fischer deserved to win), Thomas Haden Church (finally getting the Emmy he deserved for "Wings")

Anyway, I've now written much too much about the 59th Primetime Emmy Awards.