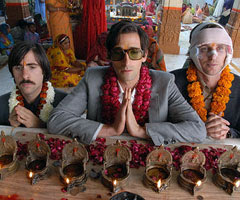 In the comment section of my "3:10 to Yuma" review, there's a wee bit of discussion regarding James Mangold's hypothetical status among auteurists, whether his lack of clear thematic or visual directorial fingerprints should be construed as a negative or if we should just nod and be appreciative of his general genre-spanning competence (it's harder than you might think). Nobody is going to have any such confusion over Wes Anderson. With "The Darjeeling Limited," Anderson has crafted his fifth consecutive quirky concoctions featuring the same aesthetical trickery, the same self-conscious voice, the same emotional underpinnings, the same melancholic core. The law of diminishing returns has been kicking in for several projects now, as I feel like Anderson has to keep working harder and harder to create a similar effect. But even as I may have walked out of "The Darjeeling Limited" underwhelmed by the movie as a whole, the number of individual moments that had me marveling was still pretty high.

Follow through after the bump for additional thoughts on both "Darjeeling" and also on the Anderson short film "Hotel Chevalier."

"Hotel Chevalier," a 13-minute prologue to "The Darjeeling Limited," won't be playing in front of the feature in theaters. The plan is to have the short available on the Internet and showing at festivals, though a note to critics said that the filmmaker still hopes that viewers will come to "Darjeeling" having already seen "Chevalier."

Certainly "Chevalier" will get an impressive Internet boost out of pure notoriety. It's doomed to be known as "That clip where Natalie Portman gets partially naked," rather than on its own merits, which is doubly cheap. The movie takes place entirely within a room at a Paris hotel, establishing through cryptic dialogue the relationship between Jack Whitman (Jason Schwartzman) and a mysterious woman (Portman). That relationship is moderately important as a backdrop to "Darjeeling" and there are several direct references to "Chevalier" in the feature. If you haven't seen the short, though, the only time you'll be confused is when Portman mysteriously flashes back in a montage toward the end.

It's simple, neat, existential and heart-felt and it's pure Anderson, from the gaudy gold hotel robes to every whip-pan and warped POV to the gloriously odd use of Peter Sarstedt's "Where Do You Go To My Lovely." It's like Wes Anderson Tang -- intensely concentrated, but still the same essence. The Internet wags will be all a-buzz about Portman's flashing of flesh and she does, indeed, show her butt, but that doesn't give enough credit to how beautiful, mature and impactful she is with so very little screentime. The maturity factor may be improved by Schwartzman's, um, diminutive stature (Portman has often been too wispy for her older screen partners), but the actors are well-matched.

I'd love to see "Hotel Chevalier" pick up an Oscar nomination for short film.

If "Hotel Chevalier" will probably be stuck as "That Portman Nudie Pick," "Darjeeling Limited" is almost certain to see most of its discourse focus on the presence of Owen Wilson as Francis Whitman, a man who forces a reunion with his brothers Jack and Peter (Adrien Brody) after he attempts suicide. Wilson, of course, has two brothers and just made headlines with his own suicide attempt. It's a pretty facile way of looking at the movie, to try seeing something that Anderson, Schwartzman and Roman Coppola wrote as a weird reflection on the life of Anderson's former regular co-writer.

It's not like the relationship between these three brothers break all that much new ground for Anderson. It's another family in extremis, another set of siblings so damaged by their collective past and their self-medicated present that they can't communicate normally anymore. Francis, Jack and Peter are all attempting to numb their feelings with pharmaceuticals, but Francis' grand plan is to bring them together in India and have spirituality and faith become their new placebo. These men don't understand a thing about Indian culture or the local religions, but Francis hopes that a few carefully reproduced rituals will help them recover whatever relationship they once had. Along the way, they have mishaps and hijinx, which ought to give you a sense of how loose the film's script is. Precious little is spelled out or over-explained. Much of the momentum comes via the eponymous train and from a typically Anderson-esque soundtrack that juxtaposes the Kinks with snippets of the score from a number of Indian classics including Satyajit Ray's "Pather Panchali" and "Aparajito."

The Oscar exposure for "Darjeeling" is likely to be limited to a few technical categories and it's a long-shot even there because there are strange things that the Academy seems not to get when it comes to Anderson's films. Both "The Royal Tenenbaums" and "The Life Aquatic with Steve Zissou," for example, received production design nominations from the Art Directors Guild, but couldn't get Oscar nominations. In both cases, it was a crime. Similarly, if Mark Friedberg doesn't get Academy recognition for his work both recreating and fabricating an Indian railway line here, it will be a disservice. Every frame is packed with details and you either believe that India is a country that was organically designed with Wes Anderson in mind, or you salute the blending of Eastern and Western sensibilities that Friedberg achieves. I'm also feeling like it's about time for Anderson's regular cinematographer Robert Yeoman to grab an Oscar nomination. It's one thing to just capture India as a beautiful and exotic region, but Yeoman's participation appears to be central to Anderson's ability to deliver on his vision.

Bottom line -- "Darjeeling" isn't as cumulatively successful as "Rushmore" or even "Royal Tenenbaums," but it still feels more cohesive than "Steve Zissou." I think it's a movie that may play better as a well-stocked DVD package (complete with "Hotel Chevalier") than it will in theaters.