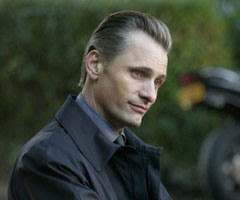 "Eastern Promises"
Director: David Cronenberg
Fien Print Rating (Out of 100): 67
In a Nutshell: I've been going back and forth on this one since Sunday, often with great frustration, since I like blogging promptly on movies I've seen.

On one hand, I was fascinated by "Eastern Promises" through Cronenberg's bravura Russian bathhouse sequence, as excruciatingly tense a fight scene as you'll see at the movies this year, putting the barely clothed man-on-man tussling in "300" to shame. At that point, I need the movie to go some place. I need something more than a frustrating character twist and a resolution that let several characters off the hook for their actions within the film.

Anyway, follow through after the bump for both my thoughts on "Eastern Promises" and my immediate and *very* truncated reactions to both Jason Reitman's "Juno" and Ridley Scott's "American Gangster" (both too far from their releases for anything more than a gut read.

Because nobody in "Eastern Promises" sprouts a vagina in the chest, a phallus in their armpit, has sexual congress with a scar or mutates into a fly, I've noticed several dumb-ish critics say that the film is a departure for David Cronenberg. But if you're looking for recurring themes that run through Cronenberg's work, there are few regularly revisited than the idea of body modifications and how modern technology causes people to undergo physical changes that reflect either their true identities or the way they want the world to perceive them.

From sorority girls with their inviting Tramp Stamp back tattoos to the frat boy who gets an Asian character stamped on his arm without actually knowing what it means, getting ink is a pretty meaningless concept for maybe 85% of the people who do it. It's just a cool thing you get as a decoration without having to actually commit to the meaning that you've permanently emblazoned on your flesh. In 20 or 30 years, there are going to be some ridiculous looking seniors doing calisthenics at the rest home pool, with their butterflies above their sagging asses and misshapen barbed wire on their flabby arms. I can't wait.

For the characters in "Eastern Promises," though, tattoos are more important pieces of identification than faces or voices. Because Cronenberg has always obsessed over mysterious subcultures, the Russian mob proves predictably fruitful. As long as "Eastern Promises" is an ethnographic study of masculinity among Russian immigrants in London, it's fabulous. It helped that Cronenberg has gotten his second straight shockingly good performance out of Viggo Mortensen. As great as Mortensen was in "A History of Violence," he's far better here. Not only is his Russian accent not distractingly hammy (I'd had my fears based on the trailer), it's quite respectable. More notable, though, is the way the character carries himself physically. It isn't just the bath house scene [a totally balls-out -- literally... sorry... -- a piece of committed acting], but the way his Nikolai positions himself around mobsters of different ranks, the way he intimidates, but also flirts with Naomi Watts' Anna. There isn't the slightest chance he gets an Oscar nomination out of this, but he may well deserve one. Also perhaps deserving is Armin-Mueller-Stahl, marvelously avuncular and sadistic in equal measures. Even Vincent Cassel, oddly subtle in French performances but hammy in his English language work, keeps everything tightly wound.

Watts is one of those actresses who's almost never bad (if anything, she's underrated), but her character is frustratingly predictable in her motivations and arc. My lack of interest in whether or not Anna got to whisk away the little baby (remarkably healthy for the premature baby of a drug-addicted teen) probably played into how very unimpressed I was with the direction writer Steven Knight eventually decided to take the story. As a piece of screenwriting, I far preferred Knight's "Dirty Pretty Things" script.

Come to think of it, Cronenberg probably could have done great work with "Dirty Pretty Things" as well. A movie about organs mysteriously ending up in hotel toilets? That's right in Cronenberg territory.

My rating for this movie is, I think, a smidge lower than I may feel and may just be a manifestation of my disappointment at the ending. "A History of Violence" grew on me after watching it a second time and I'd bet "Eastern Promises" does the same. 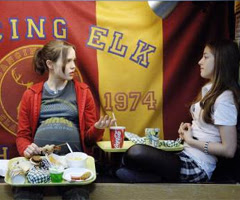 "Juno"
Director: Jason Reitman
Fien Print Rating: 72
In a Nutshell: The title card says "A Jason Reitman Film," one of the biggest possessionary credit lies I can imagine. The film is dominated not by Reitman's direction -- straight out of the Wes Anderson/ Jared Hess school of quirk -- but by Diablo Cody's script, which is hyper-natural and, at times, hyper-brilliant. It's showy and hilarious, even if it runs out of energy by the end. Ellen Page couldn't be better (fulfilling all of that "Hard Candy" potential and then some) and, of the fine supporting players, I want to give a big nod to J.K. Simmons, utterly fantastic. Fox Searchlight is going to see if Cody can get an Oscar nomination for this and I wouldn't be shocked to see them pull it off. 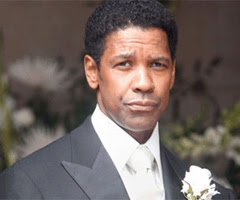 "American Gangster"
Director: Ridley Scott
Fien Print Rating: 57
In a Nutshell: Hard for me to judge what *is* here (all 160 minutes of it) because I kept yearning for it to be something different. I kept wanting a director with a tangible grasp of New York City (specifically Harlem) to be at the helm. Spike Lee would have been ideal -- it would have either been a disaster or an utter masterpiece, but it wouldn't have been middling or pedestrian. The performances are all very good (Denzel's Oscar-worthy as always), but Scott doesn't quite understand the racial or economic or geographic dynamics of the story. Rather than being an epic saga of the American city, it just ends up being a decent gangster movie. Oddly, that's what will probably help "American Gangster" play to mainstream audiences.

Anyway, I'll have fuller reviews for those two movies in a couple months when they're actually being released...