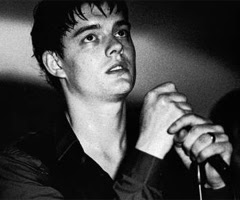 "Control"
Director: Anton Corbijn
Fien Print Rating (Out of 100): 57
In a Nutshell: Sorry. I'm going to have to politely decline to join the hype brigade on this one.

Respect the performance by relative unknown Sam Riley who does, from what I can find on the Internet, utterly channel Ian Curtis? Sure thing. Count me in.

Salute the black-and-white cinematography by Martin Ruhe? By all means. I'll even respect the eye of first-time feature director Anton Corbijn.

Here's the problem: I've seen musical biopics before. I've seen them done better and I've seen them done worse, but nothing in "Control" did anything to break the exhaustively established genre rhythms and, as a result, I was kind of bored stiff awaiting the conclusion, which is inevitable whether or not you know a thing about Curtis' life.

While I came into the movie knowing a handful of Joy Division songs -- mostly from placement in various movies, I've gotta imagine -- the only biographical facts I knew about Curtis and the band came from Michael Winterbottom's "24 Hour Party People."

In that, the movie fails utterly.

I defy anybody who enters "Control" with a comparable knowledge of Curtis (comparable to mine, I mean) to leave with any awareness of what Joy Division meant to the British music scene, what role Curtis played in their success and why there are people who still care deeply about him to this day.

I am going to give Corbijn and screenwriter Matt Greenhalgh a measure of credit and assume that part of what drew them (and fans of the band) to Curtis was that he was an enigma, a mystery man. He was 23 when he killed himself and he'd barely established any body of work, nor had a body of journalistic work built up about him. The movie is based on the book by his widow Debbie (played well, but thanklessly by Samantha Morton), but a major part of the movie seems to be that *she* didn't really get him either.

Riley plays Curtis as something of a lost boy, as a possible genius unable to deal with either the potential of celebrity or with the betrayal of his own body. If only the movie could have provided some context, any context, which makes it the flip-side of "24-Hour Party People," a movie that was all about context and milieu surrounding Steve Coogan's splendid performance as Tony Wilson.

As it is, Curtis is just a mopey British guy who listened to David Bowie and read J.G. Ballard. What separated him from the literally thousands of mopey British guys of the period with the exact same interests is unclear. He joins the other three members of Joy Division -- the filmmakers don't even *attempt* to make them into characters -- and they start clubbing. If you want to know, though, where Joy Division fit amidst the Sex Pistols, Buzzcocks, The Fall and a dozen other artists of the period, there are no hints. Again, I wonder if that ambiguity is intentional, or if Corbijn simply decided to make a movie that would only be meaningful to pre-existing fans.

If the film's look is distinctive -- every green-ish black and white frame seeming to correspond with a classic black and white photograph from Rolling Stone or an NME issue -- the narrative is crushingly indistinctive. It's that rock-n-roll biopic you've seen several dozen times with epilepsy substituted for rampant drug use, or perhaps just epilepsy drugs substituted for anything more illicit. Curtis' relationship with both Debbie and "journalist" Annik Honore are prefunctory, but Greenhalgh tries making every kiss or fight significant by tying it to the creation of a Joy Division song, which is both over-obvious and finally silly. And Corbijn's inexperience as a director becomes evident in Curtis' final spiral, which grinds on and on, encumbered by one emotionally redundant scene after another.

I've been sitting on this review for three days trying to see if my feelings toward the movie would settle into anything more positive.

I like Lauren Wissot's take on the movie over at The House Next Door and not just because I agree with her and she supplies a good Werner Herzog quote...