"Dan in Real Life"
Director: Peter Hedges
Fien Print Rating (Out of 100): 60
In a Nutshell: "Dan in Real Life" is a tragic-comedy, something this real-life Dan has known for slightly over 30 years.

I'd like to temporarily turn this review over to my movie-going companion, my Bubie Ida. She's 91 and she's a far more succinct reviewer than I am.

Her three-word review: "Sweet and innocuous."

Follow through after the bump, though, as I expand on my Bubie's basic review and also muse hopefully only briefly on "Evan Almighty."

So "sweet and innocuous" works well for me. "Cute and insubstantial" is fine also. I may go with "harmless and contrived," though that's only if I'm feeling in a less generous movie.

Like Peter Hedges' directing debut, "Pieces of April," "Dan in Real Life" shows a confidence with family nuances, but no real gift for the mechanics necessary to make a movie run. It isn't that Hedges' movies are plotless, it's that they're plotless except for when broad, sitcom-style dramatics flair up and threaten to sink the ship.

It's for that reason that "Dan" both rises and falls on the considerable gifts of Steve Carell. Remember what I wrote about "Michael Clayton"? About movies or TV shows based on a central character irony? Well, if "Michael Clayton" was about a law firm fixer who runs into a case he can't fix, "Dan in Real Life" is based on a family advice columnist who runs into the only family he can't fix -- his own. Once again, it's a thin premise better suited to an NBC half-hour comedy than a feature film, a fact that Carell's presence only amplifies. When he's allowed to be wry, morose and, well, human, Carell is exceptional, like a less depressed version of his "Little Miss Sunshine" character. But because it's Carell and the "40 Year-Old Virgin" star is being forced to carry what could have been a much smaller indie film, Hedges feels the inclination to play about the actor's broad comic gifts. You can check off the scenes in the movie that get the biggest laughs and they are, to me at least, the ones that work the least, the ones that try pushing the movie into mainstream territory. Dan ends up hiding with his lady love in the shower and ends up falling out the window? Why?!? Dan dances like a maladjusted maniac at a bar with a slutty plastic surgeon? Why?!? I'm OK with the inference that this emotionally repressed and wounded man acts like a fool when he falls in love, but why must love knock him into an episode of "Three's Company"? And why must they undermine the rest of what Carell is doing? Suddenly he's playing his "Virgin" or "Office" characters and Dan vanishes.

The movie loses believability in those bigger moments and that's bad because Hedges is already asking for a lot of faith with the initial premise that Juliette Binoche's character would, under even the explained circumstances, find herself "in love" with the utter lug played by Dane Cook.

Cook, I need note, isn't bad. He's been written without any real redeeming features, but at least you can make sense of the guy in context. The movie is scattered with excellent supporting actors who aren't so lucky. As the top of the family tree, John Mahoney and Dianne Wiest bring decades of well-regarded acting experience to help us fill in the blanks, but I lost track of the characters played by Jessica Hecht, Amy Ryan and Norbert Leo Butz, so much so that I'm not really sure which characters were blood relations and which were in-laws. If Miramax wants to get Amy Ryan an Oscar nomination for "Gone Baby Gone," incidentally, the student would be well-served by sending out screeners of "Dan." Seeing her just be happy and normal (even moreso that in her time on "The Wire") in "Dan" shows off how great she is in Ben Affleck's directing debut. Most people won't even know they're watching the same person.

As Dan's kids, Alison Pill, Brittany Robertson and Marlene Lawston are more memorable and well-defined than most of their older co-stars.

I could go on, but let me quickly skip over to... 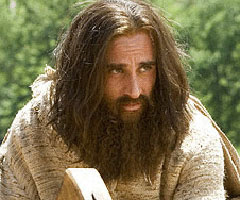 "Evan Almighty"
Director: Tom Shadyac
Fien Print Rating (Out of 100): 30
In a Nutshell: To be fair, I saw this on a long plane ride on a tiny screen. I'll acknowledge that in its wide-screen glory, it may have improved somewhat if the filmmakers will acknowledge that in a time-wasting free movie scenario, I might be more generous than I would have been if I'd paid $12 bucks to see this in the theater.

"Bruce Almighty" was already a horrible movie, a simplistic piece of pabulum that dumbed down spirituality and faith to an unbearable point. "Yes, faith is hard, but maybe more people would believe if they had divine powers and saw how difficult Morgan Freeman has it." So the sequel was never a good idea. It's not like Carell's Evan Baxter is this movie is even vaguely connected to his "Bruce" character of the same name. And it's not like Carell is really trying. This feels like a paycheck role and I'm not going to begrudge him for a second. Sure, he probably could have taken a few weeks, rewritten the entire script himself and maybe it would have been good, but why bother? If the original writers couldn't be bothered to put 10 seconds into the story, which is darned near blasphemous. I'm OK with God choosing a modern prophet, but why would God rip himself off? The Noah thing? Been there and done that. Either think up something new or don't bother.

And if you're going to cast Lauren Graham, give her *something* to do. ANYTHING. Let her be funny. Let her be sexy. Let her be defiant. Don't just let her be that wife who very briefly doubts her husband's sanity, but comes to see that he's part of something bigger. That's a role you give to Monica Potter.

I will say that I laughed out loud at "Evan Almighty" at least four times, or snickered out loud. I'm gonna stay that it was twice at Wanda Sykes and twice at Jonah Hill, playing members of Evan's office staff.

That's not good enough, even for free on a five-hour flight.