Why can't the Bionic Woman always be British? 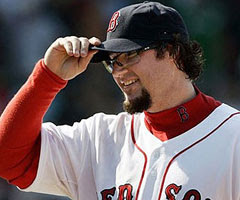 Red Sox Nation is split today, between those folks who viewed 2004 as a mixture of anti-depressant and colonic -- purging decades of bad memories or past traumas and leaving only happy feelings [Yeah, I'm talkin' to you, Jamie] -- and those of us who can't shake that being a Red Sox fan is about being uncomfortable even in the midst of success.

The first group is talking about a sweep. The second group is still biting their fingernails. Well, I quit biting my fingernails, but that doesn't mean that I'm at ease, even after a 13-1 victory.

But the good thing about living on the Left Coast is that for me, the game was already out-of-reach well before the start of primetime (even with the looming prospect of Eric Gagne pitching the 9th), which left me able to muse on last night's "Pushing Daisies" and "Bionic Woman," plus maybe a wee bit on other programs from the week...

Click through while I think about how to pitch the networks on my "Bionic Women's Murder Club" pilot...


"Bionic Woman" -- Usually I'd lead with "Pushing Daisies," but last night's "Bionic Woman" was pretty good, although it sported the show's fourth or fifth different tone in just five episodes and drew some rather ridiculously low ratings. Who knew so many "Bionic Woman" fans were also Colorado Rockies fans?

Given that Katee Sackhoff's Sarah Corvus has been the series' most interesting character, it's a bit surprising that the show's most consistent episode to date was Sackhoff-free. Will Yun Lee's character was also absent, plus the episode was low on Molly Price's Ruth, Lucy Hale's formerly hacking sister (whatever happened to *that* character detail) and Miguel Ferrer's Jonas. Guess what? Didn't miss 'em. Well, maybe I missed Ferrer. Instead, we got an awful lot of Kevin Rankin's techie, whose part has increased each week as producers have realized two things: First, Rankin's a very good actor and second that Rankin's funny and that the "funny" is playing better than then "dark and moody" these days. Wednesday's episode suggests a "Chuck"-ification of "Bionic Woman," full of quips, geekiness and low stakes espionage (the stakes may actually have been kinda high, but I ignore the terrorist-of-the-week plot). Much of the new tone comes, I'm assuming, from consultant Jason Katims, still far from atoning for making Landry into a killing machine.

Oh and after only five episodes, the writers contrived to make Michelle Ryan pose as a British exchange student just so that she could use her actual accent for an hour. It isn't just that Ryan seemed hotter with her British accent, because that's a weird and semi-subjective thing (though she *totally* was hotter). It's that she appeared more comfortable, more confident and more capable of being both funny and dramatic. The Michelle Ryan in Wednesday's episode is, I have to believe, the potential star the producers hoped they had cast.

Look, you cast this woman:

Now who would have thought it was a good idea to cover her up and make her speak with an American accent? Seriously, folks.

"Pushing Daisies" -- Another encouraging week. Who would have guessed that "Pushing Daisies" might actually make it through a full season? Actually, ratings have been dropping very, very slowly week-to-week, which cases me a bit of concern. But maybe there's a bit overlap between baseball fans and lovers of twee forensic fairy tales.

A one-legged woman living in a windmill sending letters on the behalf of her deceased mother to a one-armed convict reading the letters on the behalf of his deceased cell-mate? Twee-tastic! Chuck's former occupation as a stay-at-home juror for a paraplegic judge? Twee-riffic! Putting big funny sunglasses on a decomposing corpse to cover his absence of eye-jelly? Tweelicious! A one-winged resurrected carrier pigeon flying with the help of a parrot wing? Twee-diddlyumptious!

Often I mock just for the sake of mocking, but in the case of "Pushing Daisies" I mock because I love. Although I wonder how many different suits and semi-permeable membranes Chuck and The Piemaker can dance through, kiss through and dry hump through, their relationship is still swooningly sweet.

Oh and you want an example of "Good Twee" versus "Bad Twee"? Good Twee is Kristin Chenoweth singing They Might Be Giants. Bad Twee would be having them sing Barenaked Ladies.

** "It's a miracle bird! It's swimming in miracles, not disease." (followed later by "It's a carrier pigeon." "Diseases or messages?" "Both.")

** "Was that your boyfriend back there, the one who took a step back to let you fall?" "He didn't let me fall. It was actually a very affectionate gesture in context."

** "I'm sure it's just the mailman or a windmill to windmill salesman."

Also, while the show's production values have obviously gone down in recent weeks with the rumored budget drops, it turns out the the claymation and CG effects weren't the most important part of what made the pilot work. Good thing, too...

Other quick hits from recent viewing:

"Damages" -- As much as Glenn Close and Ted Danson and even Rose Byrne made the series perpetually watchable, the game turned out not to be worth the candle. I was neither pleasantly shocked nor shockingly disappointed by the revels in the final episodes. I just shrugged my shoulders and went about my business. And the hypothetical next season is ridiculous, since there's no way Patty would have acquiesced to Ellen's request to investigate her boring fiance's murder, knowing that that trade will eventually possibly lead to the discovery that Patty tried to have her offed. Or something.

"Journeyman" -- Was bored by the pilot. Didn't much care for the second episode. Also thought the earthquake episode was silly. But the past two episodes have begun to get into the nuts and bolts of what lets Kevin McKidd jump through time and the show has become vaguely intriguing. Naturally, nobody is watching.

"Reaper" -- Go ahead, guys. It's time to introduce the attractive female reaper character as a love interest for Sam while he deals with keeping secrets from Andi. You know you're going to do it. Get it over with.