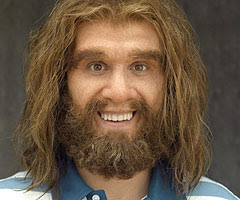 If you wonder why you make me really uncomfortable, don't look to the guy currently in the White House, or to the fact that an awful looking family comedy starring "The Rock" is the most popular movie in America (in a year in which the top overall comedy remains "Wild Hogs"), or at the fact that outside of San Francisco most of you don't respect Barry Bonds as the best baseball player of your lifetime. No, look to the ratings for the premiere of "Cavemen" on ABC.

I suppose that in a nation of 270 million (or more, possibly many more) residents, a new sitcom premiering with an audience of just under 9 million viewers shouldn't be all that impressive, really. That's still more people than will watch any comedy this week besides "Two and a Half Men" and [*sigh*] "Rules of Engagement." More than "How I Met Your Mother" or "The Office" or "30 Rock." The show did a 3.3 rating among adults 18-49, which is thankfully lower than most of the NBC comedies, but still higher than, say, FOX's "Bones" did last night.

The original "Cavemen" pilot sent to critics in May was all "Cavemen are an oppressed minority just like African-Americans, aren't we provocative?" It wasn't funny. That's why the new pilot that aired last night was all "Cavemen are just like everybody else only hairier and less funny, aren't we provocative?" And although the whole thing was declawed of its racial subtext, every once in a while somebody would make a comment about people needing to date their own kind or about the sexual potency of cavemen and I would just shrug. There's also something disturbing about watching a 30 minute show in which the actors can barely change their expressions and in which there's no sense of the performer under the make-up at all. That's Sam Huntington in the picture up there. Why is this what Sam Huntington wants to be doing now?

Are Cavemen drunk dialing or playing Wii or racquetball actually funny? If so, I may need an explanation to the subtle humor. Then you can go into what extra depths "traveler's cheque" satire got from having been delivered by Cro-Magnons.

I laughed twice at the original pilot, both times at the spectacular Julie White, a recent Tony winner who deserves some sort of even bigger award for being the only vaguely funny part of the new "Cavemen," something the producers obviously recognized, because she's a totally different character now. Still funny. Nothing else is.

I'd talk about why last night's "Reaper" was much less funny than the pilot -- something about the editing and direction not recapturing the splendidly dead-pan pacing Kevin Smith helped bring to the first episode -- but I've gotta rush to a set visit.

My Zap2it colleague Rick has gone into more depth on the suckage of "Caveman" over at the sporadically populated Gwyneth blog...

Oh and since I began this post in letter form, I guess I have to sign off...