So about that "Friday Night Lights" premiere... 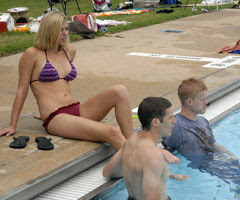 I spent nine months last year on this blog and Zap2it's myriad outlets trying to get everybody I know to watch "Friday Night Lights." I told my friends. I told my family. I told the occasional people who would interview me for the radio or whatever. I would occasionally shake random strangers in the street, grab them by the shoulders and yell, "You fool! Why aren't you watching 'Friday Night Lights'?"

So I'm not going to sit here at my keyboard and say, "I'm not sure that the 'Friday Night Lights' that's premiering tonight is really the 'Friday Night Lights' I wanted you to watch last season." I'm not going to tell you that you should skip tonight's season premiere, because what are you gonna do instead, watch "Moonlight"? Watch "K-Ville" repeats on FOX? Seriously?

Everybody else I know (I only know odd people) has already written their "Why I'm uncomfortable with the start of the 'Friday Night Lights' season" article, review or blog post, so here's another. I hate to be original.

Follow through after the bump. There are going to be huge spoilers for the premiere and rather vague spoilers about the next two episodes, which have also been sent to critics. You've been warned.

In the past week, the industry trade paper Variety has run both a review of "Friday Night Lights" and a roundtable critical discussion of the show's opening episodes. In the process, at least three alleged critics have said almost the exact same thing: The things that happen at the end of the season premiere are bad, but I can't say anything negative about them because the show's creative team has earned my faith and my unqualified acceptance that if they make mistakes, they'll fix them so fast that they weren't mistakes at all.

That's not the job of a critic, kids.

The producers of "24" start off every single season with six great episodes, dick around for 12 episodes and then close with six strong episodes, during which fans say, "Yeah, those middle episodes *all* sucked, but I had faith that the producers would right the ship." But. But. But. But those 12 episodes were horrible, they floundered and stumbled and bumbled and meandered and maybe they righted the ship and maybe they didn't, but the half a season in the middle was worse that "Threat Matrix." Fans have faith in show creators to fix things, they have confidence that they'll make things right. Critics look at what's there and that's what they address.

One fabulous season of TV hasn't earned the producers of "Friday Night Lights" a pass. Unfortunately, it's raised expectations. The first three episodes of "FNL" for this second season are *not* bad. It really hasn't become "One Tree Hill" while it was on vacation.

The things that work in the first few episodes still work gloriously. Eric and Tami Taylor remain my favorite couple on TV and an Emmy-giving universe in which television professionals fail to recognize that Kyle Chandler and Connie Britton are at the very peak of the profession doesn't deserve to be taken seriously. The new season finds Coach and Mrs. Coach separated just at the moment they need each other most, him with a new job in the big city and her (within minutes of the start of the premiere) with a new baby.

As their daughter Julie, Aimee Teegarden is sculpting the most believable portrait of teenage femininity since Claire Danes in "My So-Called Life" and the relationship between Julie and Zach Gilford's Matt Saracen has always rung true. The premiere finds Julie and Matt experiencing their own tension and distance, as Julie deals with the changes in her family and Matt faces another season of football.

While there were plenty of moments early last season when certain actors -- Minka Kelly, Taylor Kitsch, Scott Porter -- did show certain signs of just how green they were, every member of the cast has the chance to shine before the end.

If I'm being frank, the show's problems began with the finale of the first season. As I wrote extensively at the time, they made a finale that felt like they almost hoped the show didn't come back. They let the Panthers win, which was a mistake. They let wheelchair-bound QB Jason Street suddenly become a football strategic mastermind, which was a mistake. They pushed Landry (the marvelous Jessie Plemons) and Tyra (the always better-than-expected Adrianne Palicki) in the direction of a romance, which was a mistake. They did a bunch of things that were aimed at bringing the show to a happy, hopeful, satisfying series conclusion. And then NBC brought them back (and canned Kevin Reilly, the man who brought them back).

When talking about what goes wrong with the premiere and what hasn't been fixed or smoothed out in the two subsequent episodes, it's necessary to talk about Tyra and Landry. But first I wanna note that lots of things happened last season that even the biggest fans had trouble defending and they were usually the biggest plotpoints, the moments of high drama amidst the minutiae of small town life and football-as-religion. "That's such a 'Star Is Born' cliche!" people cried when Jason Street was injured in the pilot, forcing Matt Saracen into a featured role. "How are they ever going to redeem that character?" people wailed when Lyla screwed her paralyzed boyfriend's best friend. "Are they seriously doing *this* plotline," folks groused when Smash began taking steroids to improve his ranking in a touting publication. The team staging a walk-out due to a racist coach, a Katrina victim nearly getting the team put on probation, Riggins and the MILF next door... The season was full of moments that seemed iffy and many of 'em (most? nearly all?) were worked out satisfactorily, albeit faster and easier than might have happened in real life.

The things that went wrong last year were, if anything, a product of being too perfectly designed for a show of this nature. They were attempts to use the conventions of the sports genre to touch on the obligatory conflicts of the genre.

[OK. Last warning. Spoilers and some such!!! STOP READING!]

Landry knocking a guy upside the head with a pipe and killing him? That's just the producers coming up with big plot points to get buzz, because even crappy buzz isn't worse than no buzz. And I don't much care what Jason Katims has said to the contrary in interviews. I blame Ben Silverman. Just on principle.

Some reviewers have said that the premiere subplot in which Tyra is arbitrarily stalked by the man who assaulted her last season and in a tragic twist he ends up [last spoiler warning!!!!] dead and, presumably, dumped in the river is less like something from "FNL" and more like something from "One Tree Hill," though as dedicated "OTH" fans know even that silly, silly show didn't go so far as to have Peyton (or any of the other Ravens) kill her crazed fake brother. It's bad enough that the stalker plot returned in the premiere. Sure, we knew it was going to return eventually, but what was the guy doing for eight months? And why is he suddenly menacing her at all hours and in relatively public places? What does he think is going to happen? And it's bad enough that the scenes with the aspiring rapist are shot like they were taken from a slasher movie, rather than from the best directed show on TV. But did Landry need to kill the guy? Did they need to reshoot the scene, in fact, so that Landry kills the guy in cold blood, as he's turning away vanquished, rather than in total self-defense as in the original version of the premiere?

The mechanics here should be beneath the writers of such a good show. For most of last season, Tyra was the strong and capable girl, the girl you'd bet could take care of herself. She reduced Landry to a stuttering boob as a girl of that sort would do to a guy of that sort. But the producers realized that Plemmons is really good and that his scenes with Tyra, however awkward, were gold. So they said, "What can we do to make this work? What can we do to make her weak enough to need him and to make him manly enough to somehow be worthy of her?" How do lazy Hollywood minds accomplish such things? Naturally, they made Tyra into a victim, a sexual victim. Even that wasn't enough. So they made Landry try out for football, despite the fact that in a community like Dillon, a kid with no athletic interests doesn't magically say, "OK, today I try out for football" and even make the JV bench, given what we've seen of Dillon's Pop Warner devotion. That's stupid and I found it nearly unforgivable when I heard it was happening. That was before I knew we'd be introduced to Landry: Killing Machine. Basically the writers realized that the only way they could bring together these two characters loved by fans was to make them into two entirely different characters, incompatible with the characters they once were. To hell with it.

It's not a little mistake. For a show even an iota less wonderful than "Friday Night Lights," it would be "Jump the Shark"-level "Bad."

The so-called-reviewers at Variety said they had faith that "FNL" would work things out, but the Landry-Tyra subplots get worse in subsequent episodes. The characters get further and further from where they used to be and become more and more removed from the universe of the show. A change in Julie and Matt's relationship makes sense, but the new arrival in Matt's house is laugh-out-loud silly. You knew Coach Taylor wouldn't stay away from Dillon and the Panthers all season, but his path back into fold jeopardizes some of the things I most respect about the character. And Riggins and Street are heading someplace wacky at the end of the third episode and nothing good can happen there.

You know, this is long enough. I just wanted to chime in.

Now watch "Friday Night Lights." Its problems shouldn't excused and I don't have faith that they're going to be fixed to my satisfaction, but damned if I don't want to keep the show around.