MovieWatch: "We Own the Night" 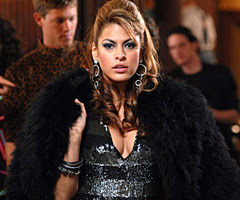 "We Own the Night"
Director: James Gray
Fien Print Rating: 60
In a Nutshell: [I saw this movie back in July for a really solid Filter magazine interview with Gray, a director I've talked to a couple times and who always impresses me as a man who may be too smart for the industry, hence his rather deliberate working pace. Because of my own rather deliberate working pace, I may have some gaps in my memory of the movie, but since it's opening on Friday, I wanted to get something up...]

A quote generally attributed to director Howard Hawks (and reproduced in so many different variable forms that it might as well have been said by Hudson Hawk) is "A good movie is three good scenes and no bad scenes." It's not a quote I necessarily like, agree with or would ever use and yet it came to mind thinking back over "We Own the Night."

Actually, "We Own the Night" isn't a movie without bad scenes. It falls shocking flat in its final act. But I still find it odd that the director of the understated "Little Odessa" and "The Yards" has managed to orchestrate several of the year's very finest set pieces to date.

Follow through after the bump for my actual thoughts, with only occasional spoilers.

When it comes to New York-set period dramas about cops and gangsters, the movie that'll get the most press and make the most money is "American Gangster," but there were three or four instances watching "American Gangster," where I thought "Boy, this is just like the same scene in 'We Own the Night' only blander and less impactful." While "American Gangster" may end up being a slightly more satisfying movie overall, nothing in Ridley Scott's film can compare to the "WOtN" rain-drenched car chase and in the head-to-head battle of drug den raids, the one in "WOtN" wins hands down as well.

That Gray is out-of-touch with the contemporary aesthetic of filmmaking almost goes without saying. I've seen several critics refer to his style as "neo-classical," but I think that refers more to what he doesn't do -- showy camera moves, ADD editing, etc -- than what he does. He's a slow and methodical director who concentrates on the details -- the never-haphazard art direction, the limited color palette, the complex framing -- and that makes his ability to get these two or three masterful set-pieces here all the more admirable.

This is Gray's third consecutive movie about a polarized immigrant family in New York and it's certainly his most commercial. When Mark Wahlberg and Joaquin Phoenix did "The Yards," they weren't box office draws and the movie was more about brooding dinner scenes in underlit rooms than about giving the audience any thrills. Sony is rightly playing up "WOtN" as a straight-forward, star-driven crime thriller, which is the strategy that's most likely to bring viewers to the theaters, but also probably most likely to leave viewers existing in disappointment.

Coasting off an Oscar nomination for "The Departed" and a confident star-turn in "Shooter," Wahlberg takes a big risk here, playing a character who becomes less dynamic and less heroic as the movie progresses. Although the two stars get equal billing on the poster, Wahlberg's role is very much supporting and Phoenix is very much the star, giving one of the finest performances of his career. Like the movie itself, Phoenix's Bobby is more interesting in the beginning and then goes down a conventional path, but the performance features few of the twitchy affectations that occasionally mar the actor's work.

This may be the first time I've ever really "gotten" Eva Mendes as a potential movie star. More than any other part of the movie, her subplot crumbles down the stretch, but for an hour or so, she's sultry and compelling every time the camera moves in her direction.

While it's hard to think of more than two or three bad performances in his entire career, Robert Duvall doesn't distinguish himself as the pater familias, perhaps because the role is too similar to ones he's played many, many times before.

The use of Russian and Polish enclaves in New York gives "We Own the Night" a richness that unfortunately amplifies the flaws of the last act. If you dedicate yourself to texture and specificity for an hour and then go strictly by-the-numbers for 30 minutes, that 30 minutes is going to seem even blander in comparison.

I could go on, but I want to get to Wednesday night TV and to "Michael Clayton." There's just too much to blog.
Tweet