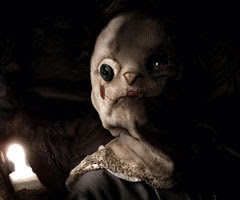 For around an hour into Juan Antonio Bayona's "The Orphanage" (or "El Orfanato"), I was wondering if this could somehow be the second consecutive year that a "genre" movie from Spain came out of nowhere to shock me and rank as my favorite film of the year? Last year, of course, it was Guillermo Del Toro's "Pan's Labyrinth," which is very possibly the finest film of the 21st Century to date. "The Orphanage" isn't quite on that level ultimately. It lacks the historical and cultural subtext that lifted "Pan's Labyrinth" and "The Devil's Backbone" from their fairy tale and haunted house trappings. However, executive produced and "presented" by Del Toro, "The Orphanage" is as proficient and effective a scary movie as one could hope for, supplying both insidious creepiness and at least three or four jump-out-of-your-seat shocks.

I'll continue for a little after the bump.

Describing "The Orphanage" is a complicated task. It's got an awful lot of "The Others" or "The Haunting" or "The Innocents" or whatever version of "Turn of the Screw" you want to highlight. It's more than slightly indebted to "Poltergeist" and "The Omen" and "Rosemary's Baby" and to "Devil's Backbone," but to my mind, "The Orphanage" is, as much as anything, like a Spanish inflected equivalent of the kind of J-Horror movies that Hollywood has been relentlessly messing up since "The Ring," including "The Grudge" and "Dark Water."

That's partially my way of saying that if "The Orphanage" doesn't end up being a surprise subtitled hit when it premieres late this December (mirroring, you can safely assume, the platform pattern followed by "Pan's Labyrinth"), plans to remake it will begin almost immediately. The friend I saw the movie with cast Renee Zellweger as the woman who returns to reopen the orphanage where she grew up and soon begins noticing some supernatural doings afoot. I don't mind Zellweger, but I'm going younger and more commercial, putting Charlize Theron in the lead of my own remake. Either way? It's sure to get screwed up in the translation.

The absence of historical context that I mentioned earlier hampers "The Orphanage" in comparison to the Del Toro films, but also, truthfully, in comparison to the best of the J-Horror movies. Part of why the American remakes of "Ringu" and "Pulse" failed is that they didn't locate any sort of American equivalent of the over-arching Japanese sense of isolation and technological alienation that infused the original. That Walter Salles' "Dark Water" remake actually *did* make the original Japanese format into a specifically American and New York-based story is why I think that movie is decidedly underrated.

One way or the other, "The Orphanage" is technically magnificent, but geographically and culturally generic by nature. The old coastal orphanage that serves as the movie's main (almost exclusive) location could be in rural Maine or Northern Washington and except for the language spoken, nothing would need to be changed. Even the parts of the story that have a time-period specificity -- one character has HIV, a group of paranormal experts come with a decent haul of technical gizmos, etc -- aren't unique to Spanish culture.

Bayona makes the most of old-fashioned horror technique -- his framing is always impeccable and suggestive and the movie's sound design is never haphazard and feeds major parts of the plot. He uses gore sparingly, but when he wants to gross you out, he knows how.

What heft "The Orphanage" lacks in the context department, it almost picks up in fairy tale resonance. While not as obviously settled, intellectually, in a wealth of folkloric study as "Pan's Labyrinth," Sergio Sanchez's script shows the hallmarks of a man who knows his Brothers Grimm and also understands why "Peter Pan" (the Barrie original more than the Disney version) has its timeless lyricism. The movie also mines from the near-ancient tradition of stories about women whose desire for maternity leads to questionable decisions and even more questionable sanity.

And now back to the Sox. J.D. Drew has already provided some heroism, which must mean that Eric Gagne will pitch three scoreless innings for the win.