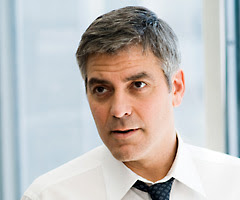 "Michael Clayton"
Director: Tony Gilroy
Fien Print Rating (Out of 100): 64
In a Nutshell: [It's been a week that I've been batting "Michael Clayton" around in my head reflecting on whether or not I actually liked it more than I initially thought I liked it. I couldn't put my thoughts together well enough because I didn't of the kernel of why it fell short for me. Then, in the midst of a comment over at A List of Things Thrown Five Minutes Ago" something clicked. Maybe not fully, but enough to write a blog post.]

Yes, "Michael Clayton" is a thoughtful and serious movie, a movie made with brains and aesthetic precision, a movie full of strong acting and cracklingly well-composed dialogue.

At its most basic level, though, it's also just a pilot for an intriguing FX or Showtime or HBO TV show, nothing more or less.

Go through after the bump for the rest of my thoughts.

More frequently than movies, TV shows can be based on a central ironic character construction. She's a matchmaker, but she's also a divorce attorney and she can't find love herself... It's "Miss/Match." He's a shrink, but he's crazier than any of his patients... It's "Huff." He's a cop, but he's more dangerous than most of the criminals... It's too many different shows to list. Movies aren't immune to the formula, by any means, but movies are, by their nature, more narrative driven, while TV shows can be more character-driven. And "Michael Clayton" is a movie that's more character-driven.

For better or for worse, though, it's driven by a surprisingly banal character construct. Our main character, Michael Clayton (George Clooney), is a fixer for an all-powerful New York law film. He's the guy who can get you out of any situation, no matter how awful. But guess what? Michael may be able to fix anything in his professional life, but in his personal life... HE'S A MESS!!! Bet you never would have seen that coming. He was a bad husband and now he's a well-intentioned but fairly weak father. He has a by-the-numbers gambling addiction -- in the past week, I've seen the exact same underground poker den in "Michael Clayton," "Gossip Girl" and "Journeyman," suggesting that it's zeitgeisty, but over-done -- and a by-the-numbers assortment of estranged siblings (One's a cop! One's a drug addict! Yawn...). Now, suddenly, the man who has never given ethics a second though in either his personal or professional life has run into a professional problem he can't fix and it's going to change his life forever.

I don't wanna be a pill, but if you find the right under-employed movie star or well-traveled veteran TV star -- Maybe Bradley Whitford? Or Bill Pullman? Or Matthew Modine? -- and they could star in "Michael Clayton: The Series." Each week, Michael does his fixing duties for his real job, while working on the sly to root out corporate corruption and repair the tattered shards of his personal life. In a TV series, he could dedicate whole episodes to bonding with his son or fighting off the desire to place a bet.

It would take bullshit movie snobbery to begin to suggest that Michael Clayton is in any way a more complicated character than Vic Mackey or Brenda Johnson or Dexter Morgan. And with those characters, you know that each week's generic or vague procedural plotline is just a means to a character end and that something different or better will be along next week. The critics who are most impressed with "Michael Clayton" are, I suspect, exactly the sort of cinema elitists who don't watch TV.

In "Michael Clayton," though, the superficially and ironically conflicted title character is caught up in a generic and vague court case and, because this is a movie, there isn't anything else. You're stuck with Michael Clayton versus the Environmental Meanies, because that's all there is.

By just being another movie about a court case involving an evil chemical company poisoning the groundwater, "Michael Clayton" ends up occasionally feeling like a more smug version of "A Civil Action," which was already a pretty smug movie to begin with. The biggest difference is that "A Civil Action" (or "Erin Brokovich") were actually about their court cases and their political actions, at least to some degree. In "Michael Clayton," the court case is 100% a red herring. It doesn't have an iota of meaning. Why, then, not come up either with a different kind of court case involving an identical ethical crisis, or else provide no information at all about the case that's pushing the action, make it a complete MacGuffin. If you keep referring to "The U-North Case," people can either draw their own assumptions or not and you don't need to bog the plot down with generic legal procedural stuff.

[In that respect, actually, "Michael Clayton" is almost the reverse of "Syriana." Steven Gaghan's movie was so overly invested in the meat of its subject matter that the half-dozen characters experiencing Clayton-esque ethical dilemmas were somewhat undersold. I may actually prefer "Michael Clayton" to the cluttered "Syriana." A comparable movie that I prefer to "Michael Clayton," though, is Roger Michell's "Changing Lanes."]

As a writer, Gilroy made his bones on ethical thrillers [a genre that also includes "Changing Lanes"] that were too high minded to be actual thrillers. I'm thinking of things like "Extreme Measures" and "Proof of Life," both movies with more on their minds than typical popcorn movies, but also less corn than a good popcorn movie needs.

As a director of his own material, Gilroy actually proves more capable than either Michael Apted or Taylor Hackford were with the aforementioned scripts (though less capable than Dough Liman and Paul Greengrass were with his "Bourne" scripts). He coaxes a great leading performance from Clooney and good work from Tilda Swinton and the assortment of less recognizable supporting players (lots of New York theater types, I'm assuming). Depending on your tolerance for scenery chewing, you'll either find Tom Wilkinson Oscar-worthy or else you'll wonder why, in a movie where everything else is muted, he's bellowing like this was finally his chance to play King Lear. Wilkinson is such a good actor that I can't begrudge people for continuing to cast him as Americans even though he's utterly incapable of doing an American accent.

We've now reached the point at which I could keep rambling or walk away.

Since the Red Sox are obviously requiring more of my attention, I'm going to walk away.
Tweet