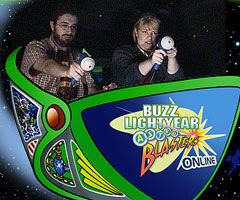 When, many a moon from now, my kids or grandparents or children of friends ask me where I was the day Powerful USC's 35-game home winning streak came to an end against an academically superior, football clown college from Palo Alto, I'll be able to point to the picture above and say that I was so confident that of all of the games in the whole season, the one USC was least likely to lose would surely be against Stanford, which would surely make it the perfect day to accompany old friends and their lovely 16-month-old daughter (Hi Sonya!) to the Happiest Place on Earth. Lemme tell you, the happiest place on earth becomes less happy when you're constantly checking your cell phone for updates on a football tragedy (not to be confused with a genuine tragedy... don't think I don't know the difference) in the making. I'd been hoping I could check the score once, go "35-0 USC five minutes in? Nifty" and tuned it out. Oh well. Does this mean the Mark Sanchez Era begins next week for USC? I've cheered for John David Booty in the past, but four interceptions against Stanford? People have been justifiably benched for a quarter of that.

As you can see, if you look closely, I *am* wearing my USC colors in the picture. Spirit did no good. And lest you get the impression otherwise, Disneyland was still great fun. The new Space Mountain rocks, even though I wish the Haunted Mansion hadn't been barfed all over by "The Nightmare Before Christmas" and that Johnny Depp hadn't infiltrated Pirates of the Caribbean.

My shooting partner from the picture above gave me a "Sleepy" pin (of the "Seven Dwarfs" fame), seeing as how generalized insomnia and the weight of my insignificant world often have me yawning my way through my days.

It strikes me, though, that I cannot be encapsulated in a single dwarf. I am a legion of dwarfs. I have a multitude of dwarfs inside me -- I am at times Sleepy. I'm often Grumpy. When I run out of Claritin, I'm Sneezy. The instances in which I'm Dopey and Bashful are obvious to those who know me. And I'm even at times Happy. I'm never Doc.

Anyway, I just wanted to acknowledge today's USC football loss (and Disney expedition) in some manner. My apologies for the intellectual detour. Tomorrow I'll try to review "Michael Clayton," a movie other critics seem to like more than I do.

[EDITED: It strikes me that this post, or at least its tone, isn't particularly clear if you don't actually know me and if you don't know that I went to grad school at USC and that my every Saturday in the autumn is set aside for watching USC football and that today was one of the very, very, very rare Saturdays in which I had an activity that I found important enough not to watch the USC football game...]
Tweet