MovieWatch: "In the Valley of Elah" 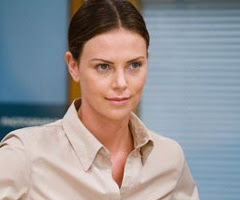 "In the Valley of Elah"
Director: Paul Haggis
Fien Print Rating (Out of 100): 62
In a Nutshell: [Having a three-movie weekend in the midst of premiere season wasn't a mistake while I was doing it. Heck, I like going to the movies even if I don't like the movies and even if the still-new Westside Landmark has begun to lose just a bit of its shine with its embarrassingly poor soundproofing between theaters, occasionally frustrating in-theater sight-lines and inadequate bathroom facilities. But if I hoped to turn around blog reviews quickly, this was the wrong time to do it. Oh well. I've been pumping out content on other fronts. Content is king. Yada. Yada.]

I've made no secret of my utter and mostly unqualified hatred for Paul Haggis' Oscar-winning "Crash." Then again, lots of people made no secret of hating it. That doesn't make me courageous, just right. But that's a different issue. I was in a bit more of a minority, though, in standing behind Haggis' immediate follow-up, the NBC dud "The Black Donnellys," which was an underrated little piece of drama.

The most recent movie I got around to reviewing was, of course, "The Kingdom," or as everybody's callin' it, "CSI: Riyadh." "In the Valley of Elah" is actually the flip-side of the coin from "The Kingdom," so they were a good pairing for the weekend.

In "The Kingdom," the genre pyrotechnics and procedural mechanics had to work to cover up the fact that they were being used in service of what could have been a provocative and complicated story, a piece of actual dramatic depth. With "In the Valley of Elah," it's exactly the opposite. In "Elah," the conspicuous attempts to overlay depth, meaning and contemporary resonance often covered up or bogged down what should, essentially, have been a procedural with a provocative under-current.

"Elah" is really just about a father (Tommy Lee Jones) and a local cop (Charlize Theron) investigating the disappearance and (this isn't really giving anything away) death of the man's son. This is the sort of thing that "Law & Order" and British TV do really well, a crime thriller in which the political subtext *eventually* becomes everything.

I haven't gone searching through other reviews, but has anybody compared "In the Valley of Elah" to Paul Schrader's "Hardcore"? It seems like an obvious comparison, but I'm too lazy to go look. "Hardcore" is, of course, the story of a religious father (George C. Scott) who travels to the depths of Hell (errrr... Los Angeles) to find his missing daughter, only to get sucked into the world of then-mostly-underground pornography. I guess the comparison would have worked better if Scott's "Hardcore" character had been a former porn star himself, because the military background in Jones' past is key to the plot momentum of "Elah." Jones's Hank Deerfield wasn't just military, he was a military investigator and, if the movie is correct, just about the smartest darned military investigator ever (imagine if Scott had once been Ron Jeremy or Peter North or John Holmes, I guess). But just as "Hardcore" is about Scott's character's view of the adult industry through his Lutheran eyes, "Elah" is about the way Jones' character approaches the modern military through the eyes of a man we can only assume was active in Vietnam and perhaps subsequent smaller actions. ["Elah," in fact, becomes muddled for me by how naive Hank is about post-traumatic stress and the impact of war on young soldiers. While he isn't shocked that soldiers sometimes do drugs or screw whores, the movie goes on at least an hour longer than it needs to because of his failure to see clearly.]

If Haggis had treated the movie as a thriller, first and foremost, and as a story about soldiers coming back from Iraq secondarily, I bet he'd have made the same points in a much more subtle way. Then again, even at his very best, Haggis and subtlety have gone together like peanut butter and dish washing detergent.

"In the Valley of Elah" is tanking at the box office, which didn't need to happen. But from the obscure title (and even after a week of thought, it's unclear to me who specifically Haggis wants to imply is our contemporary David and who is our contemporary Goliath [I have at least four or five possible pairings, several of which take into account outside knowledge of Haggis' politics and religious background] through every aspect of the style, "Elah" works awfully hard to be taken more seriously than you might have taken, say, "A Few Good Men," which could be the most popcorn-y equivalent of what Haggis' movie could have been. Everybody frowns through the entire movie and delivers their dialogue as slowly and deliberately as possible. Every edit is half-a-second slow, lest your mind too quickly move away from whatever has just transpired. Cinematographer Roger Deakins was entrusted with sucking all life-like color from the movie, leaving blues and grays and other cold, steely tones (and he does his job wonderfully, because that's what Deakins does).

I would describe the film's performances as universally somber and sour, from the "Eat a Lemon" school of ultra-important dramatic acting. Don't take that as implying that I dislike the work done by Jones, Theron or Susan Sarandon, who all do variations on their standard character types (or, in Theron's case, a variation on her standard "I'm not wearing make-up, so take me seriously" character type). If these people have any shadings at all, it's the acting and not the writing. In fact, Haggis seems purposely to have filled as many supporting roles as possible with familiar faces as a shortcut. If you plunk James Franco, Jason Patric, Josh Brolin (building a resume as this fall's Most Improved Actor), Frances Fisher or Barry Corbin in a one or two scene part, you can underwrite those characters, since the actors bring their own strengths and baggage.

I gotta say that my overall rating for this movie took three big hits at the very end, with Haggis' refusal to believe that he'd made his point with his storytelling. The final shot, the closing credits dedication and the Annie Lennox final dirge were unnecessary, since it's not like Haggis was making some deeply provocative, insightful or controversial point. His argument is as safe and wishy-washy as you'd expect from the man behind the "Everyone's a little bit racist, we all need a hug" faux-complexity of "Crash."

None of the three movies I saw last week have worn very well in my mind and I'd probably lower all of their Fien Print ratings to something in the upper-50s if I could go back. But that ship done sailed...
Tweet