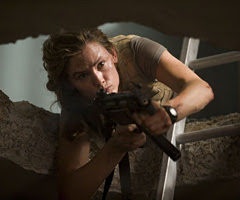 "The Kingdom"
Director: Peter Berg
Fien Print Rating (Out of 100): 61
In a Nutshell: There's an interesting cycle to "The Kingdom." I was immediately sucked in, from the exceptional title sequence tracing the Kingdom of Saudi Arabia since the discover of oil, through the horrible tragedy that leaves lots of unimportant people dead along with one FBI agent. As we all know, one FBI agent has the symbolic value of at least five American civilians and probably several hundred Middle Eastern civilians (a policy both Hollywood and the United States government has adhered to for years). I lost interest for nearly an hour as a team of FBI investigative agents -- Jamie Foxx, Chris Cooper and a couple TV stars -- got to Saudi Arabia and realized that it's different investigating a crime there than in the United States (SHOCKING!!!). Then, as Peter Berg pulled out all the stops and staged a fantastically sustained final 30 minutes, including a powerful echoed final line, I was hooked again.

But 48 hours later? Some of the gut-punch from the final line has worn off, some of the adrenaline from that climax has gone out of my system.

I'm ready to step back and say that "The Kingdom" is a fine action film with just a bit of extra weight, but that there's still less human value than Berg was able to pour into "Friday Night Lights," either the feature (his last big screen effort) or the pilot for the NBC series (don't get me started on the new season's first three episodes).

Follow through after the bump for the rest of my thoughts.

There was some sort of debate over on the often pugnacious Hollywood Elsewhere blog about just who should get the cookie for having first called "The Kingdom" "CSI: Riyadh." Not only did Jeffrey Wells demand the cookie for himself, but he demanded that all people to subsequently use said catch-title present him with new cookies, as well as other genuflection. I noted on the message boards that fellow blogger/Check the Fien Print reader Andrew Dignan had used the phrase on his Punitive Superego blog back in April and that I couldn't find any earlier uses.

But I also noted that sometimes things are so manifestly *right* that if one person didn't say it first, another would have. After viewing clips from CBS' "Cane" at network upfronts in May, I called it "'Dallas' with Rum." I don't have a clue if anybody used the phrase first, but I saw a half-dozen reviewers (including me) use it last week when the show premiered (to lower demo ratings than the all-too-swiftly cancelled "Smith," but that's a different story).

"The Kingdom" *is* "CSI: Riyadh" a reduction that encapsulates both what it does well and why it falls short. Matthew Michael Carnahan's script is full of fine quips (mostly given to Jason Bateman and Jennifer Garner) and reasonably intelligent and sympathetic pieces of investigative work (most from Cooper and Foxx). The pieces add up and no clue is introduced without a well-announced payoff. Shot by Mauro Fiore on locations in the United Arab Emirates, "The Kingdom" practically oozes Middle Eastern ambiance, particularly with the performances by Ashraf Barhom and Ali Suliman, stars of the Oscar-winning "Paradise Now," a fact that probably opens up another can of political worms (barrel of political monkeys?) that I don't want to get into.

What you can't get beyond is the idea that "The Kingdom" probably tiptoes around something that's much too important to be tiptoed around in a mere action film until that mere action film is something as atypically brainy and brawny as "Three Kings." [Wait. Can I pause and ask why we're just now getting around to this onslaught of movies about our current situation in Iraq, but none of them is as forward thinking and perceptive as a movie David O. Russell made back in the 20th Century about the *last* war with Iraq? At a certain point, critics are going to recognize and proclaim that "Three Kings" is the best and most important movie of the past decade. I'm just saying...]

So "The Kingdom" can't just be a grenades/bombs/chases/happy ending action movie. Berg already did a fine version of that genre with "The Rundown" and he obviously is shooting bigger political fish in a barrel (that barrel of monkeys?) here. The film's "Violence perpetuates more violence" conclusion has almost nothing to do the overall message of the film which suggests that without American interventionism the somewhat backwards and certainly procedurally disadvantaged foreigners would probably never solve any crimes at all. It's a weird breed of bleeding heard jingoism and it isn't satisfying after additional reflection.

I wonder if the movie might have been improved if it had made more use of the femininity of Garner's character and the Jewishness of Bateman's. Those character traits are just signposts to remind us, whenever we forget, that Saudi Arabia is a different world. Actually, Bateman's Jewishness never figures in at all, except perhaps to the undercurrent.

Garner and Bateman are just two of the familiar TV faces who pop up to enhance that television-plus procedural feel. You also add Jeremy Piven, Frances Fisher and Ashley Scott, plus Berg transporting two of his small screen "Friday Night Lights" stars -- Minka Kelly and Kyle Chandler -- for early cameos.

Stay tuned maybe tomorrow for my thoughts on "The Valley of Elah," another movie that uses a TV-style procedural format to try dealing with world events in a cinematic way...