MovieWatch: "Before the Devil Knows You're Dead" 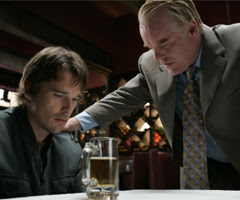 "Before the Devil Knows You're Dead"
Director: Sidney Lumet
Fien Print Rating (Out of 100): 70
In a Nutshell: When "Find Me Guilty" came out last year, there was a rush, particular among old guard film critics, to declare that for the first time in years -- a decade? two decades? -- Sidney Lumet was relevant again. For my money, "Find Me Guilty" was a confused mixture of broad post-"Analyze This" mobster stereotype comedy and broad courtroom grandstanding, satisfying as neither and ultimately more likely to be remembered for the dead groundhog curled up on Vin Diesel's head than for any cinematic merits.

Many of the same critics who saw great merits in "Find Me Guilty" are seeing Lumet's latest, "Before the Devil Knows You're Dead," as a new masterpiece from the director of "The Verdict," "Prince of the City," "Network," "Dog Day Afternoon," "Serpico," "Fair-Safe," "The Pawnbroker" and "12 Angry Men." That's a HELL of a resume and "Before the Devil..." isn't close to Lumet's finest efforts, but unlike "Guilty," it's at least a good movie, made extremely watchable by the performances from Philip Seymour Hoffman, Ethan Hawke, Albert Finney and Marissa Tomei.

The script, Kelly Masterson's first credit, reads likes somebody immersed in Jim Thompson and Shakespeare's tragedies, simultaneously. It has Thompson's pervasive fatalism, but in this case, the Thompsonian lone wolf (Philip Seymour Hoffman's disconnected Andy), is actually a part of a big family and it's hard to know if the inevitable danger the character finds himself in is a product of his attempted isolation or of his need to turn to family and loved ones in his desperation. Is he dragging himself down or is he being dragged down? There's a thematic richness to the movie that goes beyond its heist-gone-wrong set-up.

I was thinking initially that this was an oddly assertive performance by Hoffman, who I think of as excelling at playing characters with external weakness. But as I look at his filmography, I seem to have let "Owning Mahowny" stand as his defining performance in my mind. I don't know why that is. Here, he plays a man who has established a surface persona based around the way he dresses, the way he slicks back his hair and the way he holds his cigarette. The confidence he shows the world belies his internal turmoil. This isn't particularly fresh screenwriting, or character building, but Hoffman plays it perfectly.

The inevitable contrast is Hawke as his brother. That character is all surface torment, all exposed emotion. Even though he earned an Oscar nomination for "Training Day" and I loved him in both "Before Sunrise" and "Before Sunset," this could be Hawke's best performance and if the movie gets any audience traction at all, he has enough showcase scenes to be worthy of another Oscar nod.

Since you can pretty much guarantee that Finney will be excellent in the role of the tormented father (even if I couldn't figure out for a second if he was supposed to be American or long-since-transplanted British), that leaves Tomei as the x-factor in the cast. My filmgoing companion and I tried to get a handle on what, exactly, her character's pathology is. Is she just a childlike woman stuck in an unhappy marriage? Is something deeper wrong with her? In either case, since supporting actress is always a tough Oscar field to fill, Tomei is completely worthy of a slot, even if most of the fanboy buzz coming out of the movie will be about her nudity -- she and Lumet seem equally proud (justifiably so) of her body.

[Several notes on supporting performances: Michael Shannon is amazing and the movie is almost worth the price of admission just to hear him say "Chico." Amy Ryan is everywhere and this is another relatively "normal" performance to off-set her "Gone Baby Gone" work. And finally, I'm glad to see that Lumet has been employing Aleksa Palladino, who five or six other people must remember as Scarlett Johansson's sister in "Manny and Lo."]

The main performances in the movie are obviously a tribute to Lumet, who captures countless moments of small human behavior even in the midst of the driving plot. About two thirds of the way through the movie, Hoffman's character turns an apartment upside down in a way that's so marvelous I could have rewatched it immediately. That's not a gift you cease to have just because you're over 80.

But Lumet doesn't understand digital cinema and I was consistently frustrated by just how awful "Before the Devil Knows You're Dead" looks. There are ways to take advantage of the limitations of digital photography. The aesthetic language of digital cinema has largely been taken from Dogme and it's made up of tight close-ups and hand-held intimacy. Lumet and cinematographer Ron Fortunato resist that convention and shoot "Devil" in a near classical style. I've never seen a more stationary digital film, I don't think. So I was constantly looking at the framings and thinking that the compositions would have been nice if they weren't so darned ugly, so flat and muddy. In these moments, Lumet feels like a filmmaker who doesn't completely grasp the direction the medium has gone.

And neither Lumet nor Masterson completely convinced me that the jumbled narrative was really necessary. The non-linear storytelling keeps doubling back to show the same events from slightly different perspectives, but it's very rare that the second viewing of events provides any particular insight. Set out beat-by-beat, the plot isn't very complicated and I felt like Masterson was just giving in to the post-Tarantino hegemony of non-linear crime thrillers, rather than servicing a story.

We'll see how this movie settles in my head in the weeks to come.

[Also worth discussing, perhaps in a different forum, is the Saul Bass-esque poster, which is both brilliant and vaguely misleading. If you hop in your Way Back Machine and put the "Devil" poster next to the "Man With the Golden Arm" poster or the "Anatomy of a Murder" poster, nobody would think it implied any humor. However, in this age of homogenous posters where every one has nearly the same composition and imagery, people look at the "Devil" poster and assume the movie is a dark comedy. In reality, it's nearly humorless, at times to a fault.]