NetflixWatch: "No End in Sight," "Red Dawn" and "Broken English" 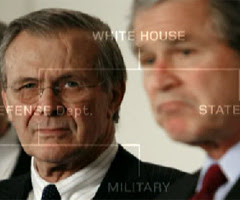 I had a slow blogging period last week. I'm not sure whether to blame Thanksgiving, an uninspiring assortment of TV or my unfortunate introduction to Facebook. As a result, I'm plugging along trying to get out posts three days in a row. I'm dedicated like that.

And speaking of three days in a row, or at least things that come in threes, this was the third straight week I was able to plow through all three of my Netflix DVDs. It turns out that it's easier to inspire myself to watch when I have a pile of relatively new releases than when I have a 3-hour French movie that I should have seen in film school. In case anybody's curious, I've readjusted my queue to frontload 2007 releases to better justify inevitable end-of-the-year listings. I'm conscientious like that.

Of course, sometimes I get weird bees in my bonnet. This week's bee was "Red Dawn," which I had vivid memories of having seen in childhood and then I missed several "Red Dawn" references in comments on a Zap2it blog post. Ready to accept that I'd really only seen promos for "Red Dawn" on HBO as a kid, I moved it up my queue and managed to get the absolutely splendid pairing of Charles Ferguson's "No End In Sight" and John Milius' "Red Dawn." One's a left-skewing documentary about how the Bush Administration's policies in Iraq created an evil and dangerous insurgency and an unwinnable war. The other's a Right Wing screed about a group of plucky insurgents who take down an occupying military force gifted with a better artillery, but cursed by a cocky lack of respect and understanding of the opposition.

Yes, I know. That's the kind of juxtaposition that mostly only amuses me.

Follow through after the bump for capsule-type reviews of those two movies, plus Zoe R. Cassavetes's "Broken English."

"No End In Sight"
Director: Charles Ferguson
Fien Print Rating (Out of 100): 71
In a Nutshell: I hold documentaries of this type to the standard of Errol Morris' "Fog of War," which proves an impossibly high standard. What Ferguson lacks in craft, though, he makes up in cold and simple persuasiveness. While one or two of the talking heads deconstructing the failures of the Iraq War II are mighty passionate (Paul Hughes looks like he wants to cry a few times), the documentary rarely raises its cinematic voice. Evidence is laid out simply and chronologically with easy to digest chapter headings. Dick Cheney and Donald Rumsfeld are presented as the villains, but not for partisan reasons. Similarly, George Bush Jr. is made to look like an out-of-the-loop buffoon, but not for partisan reasons. Sure, liberals will feel vindicated by the movie, but if anything Ferguson's argument is that if we had to go to war at all, the major failing was a lack of conviction and a lack of assertiveness. Many of the talking heads who are most critical would almost certainly be regular Republican voters. Simply put, Ferguson says that the war and particularly the post-war reconstruction were blundered at the top and, as a result, he's immune to any of the usual Right Wing rants about undermining our troops. No, the troops are -- appropriately -- represented as largely heroic, largely selfless and largely betrayed by their leadership. If anything, the documentary is too safe and obvious in its analysis. The vast majority of viewers at this point will be people who already agree with it, though its analytical trappings will protect it from the sort of hatred that Michael Moore docs generate. 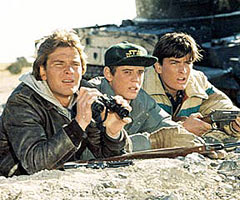 "Red Dawn"
Director: John Milius
Fien Print Rating (Out of 100): 60
In a Nutshell: That rating is 100% predicated on the idea that "Red Dawn" was conceived of and executed as a comedy and that everybody involved went into the project with the same sense of giddy incredulity. If you try telling me that Milius took anything he was doing in this movie seriously, I may need to lower my rating something closer to a 10, because if it's a drama, "Red Dawn" may be one of the worst, most dated movies ever. And I say that as a fan of "Taps" and "Toy Soldiers." Heck, I even prefer "Masterminds" and that was directed by the guy who did "Battlefield Earth." But if you're drunk and with friends -- or even alone and gifted with a healthy sense of irony -- "Red Dawn" is wicked funny. Given that the performances are uniformly awful, there's some enjoyment in trying to guess how Patrick Swayze, Charlie Sheen and somewhat C. Thomas Howell became stars And Darren Dalton, Brad Savage and Doug Toby haven't been heard from again. Bigger laugh? Superfly Ron O'Neal as a sensitive baddie who only speaks like he just stepped out of a high school Spanish class or Harry Dean Stanton standing at a chainlink fence bellowing "Avenge me! AVENGE me!" It's interesting that "Red Dawn" was a big hit and yet still managed to kill (stall? stagnate?) Milius' career. This is a movie that really needs a straight-forward, post-9/11 remake, perhaps transferring the action to an urban environment beset upon by terrorists? Like "The Siege" only with kids running around yelling "Wolverines!" at random intervals. Even in my remake, I'd still find a way to work in a scene where Patrick Swayze and Charlie Sheen kill a deer and force C. Thomas Howell to drink its blood. That would go over huge with the kids today. 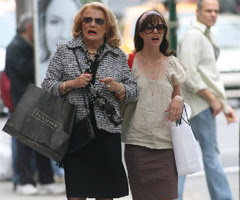 "Broken English"
Director: Zoe R. Cassavetes
Fien Print Rating (Out of 100): 48
In a Nutshell: Oh look. It's that low-budget Sundance movie where Parker Posey drinks a lot, smokes a lot and mopes around complaining about how hard it is for her to find a man and then finds love... where she least expects it! Back in the mid-90s, this was a whole genre, being pumped out by Chinese sweatshops at a rate of three or four per year. To Posey's credit, she took several years away from the genre, which might explain why "Broken English" was greeted with anything other than eye-rolling irritation at Sundance this past year (respect for Cassavetes' filmmaking roots probably helped). It's so contrived and awkward and visually and structurally bland that Posey's performance -- she's as good here as she's ever been -- gets lost. I'm also confused by the ending. Was it meant as an magic-free homage to "Before Sunset," or did Cassavetes honestly believe she could rip off one of the best indie romances ever made and nobody would notice? I have to assume the former, but still...