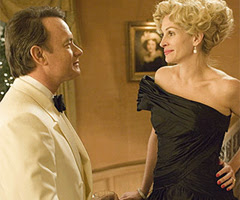 "Charlie Wilson's War"
Director: Mike Nichols
Fien Print Rating (Out of 100): 72
In a Nutshell: It's rare at this point for a studio to screen a movie so far out and not make mention of embargos, but since the trade papers zipped their reviews for "Charlie Wilson's War" up in a hurry, it's obvious that Universal isn't concerned about such things.

That's because the studio knows that in "Charlie Wilson's War," they have a movie with Old Hollywood sparkle. It's got an Oscar-winning director, an Aaron Sorkin-esque script from Aaron Sorkin and star-wattage performances from Tom Hanks and Julia Roberts (and a rock-solid, iron-clad, guaranteed Oscar-nomination-lock of a performance from Philip Seymour Hoffman).

Unlike most of the movies that will premiere in December, "Charlie Wilson's War" has the feel of quality with minimal weight. It doesn't make you feel guilty for having fun, though a choice was obviously made to emphasize entertainment over emotional heft. In the long run, that may effect the film's legacy, but in the short-run, people will enjoy this movie.

Follow through after the bump for the rest of the review.

For an hour, "War" moves along with the blithe confidence and dynamic pacing that carried all of the best episodes of "The West Wing." Characters talk so quickly and so cleverly that most viewers won't notice that most of the dialogue is about a 25-year-old political conflict and most of the action revolves around Congressional appropriations.

Nichols is wise not to mimic the visual stylings that Sorkin and Tommy Schlamme pioneered between "Sports Night" and "West Wing," though there are more than a few straight-forward walk-and-talk scenes. He cunningly alternates between the epic and international scale of the Afghan conflict and scenes on Capital Hill that are laid out like a perfectly blocked stage production. The first meeting between Hanks' Charlie Wilson and Philip Seymour Hoffman's Gust, as the CIA spook is shuffled in and out of the Congressman's office is a thing of beauty, a textbook example of the deceptive simplicity of comic timing.

The combination of Nichols' direction and Sorkin's script is clearly an actor's dream. Though both of their Texas accents waver, Hanks and Julia Roberts put on a clinic for tart line readings. Both have always been comic actors at heart and Sorkin's script is so clever that neither star appears to break a sweat.

The acting heavy lifting comes from Hoffman, who sports a hairpiece, moustache, delivers every line from deep in his gut and dominates every scene he's in. Factor in an award-worthy performance in "Before the Devil Knows You're Dead" and strong buzz for "The Savages" (which I'll probably get to this weekend) and Hoffman appears to have made the most of his 2007 credits. This shouldn't be surprising but, um, he's good.

Also good? Amy Adams. She'll get her Golden Globe win (bet the house) and Oscar nomination (bet a couple bucks) for "Enchanted," but her supporting role here is a reminder that she can operate outside of the realm of the wide-eyed naif. Her Bonnie is just Wilson's trusty assistant (and as Sorkin trusty assistants go, she's no Donna Moss), but Nichols senses almost immediately that being able to cut to an Amy Adams reaction shot is an extraordinarily asset.

I've buried the "But..." clause a bit, out of respect for how far out the movie's release is, but it isn't a small "But."

But the movie goes soft in its last 35 minutes. I hear there was a 145-page Sorkin script, so the 97 minute running time suggests a lot of cutting. Granted that more movies than not deserve to be 97 minutes, but the last act of "Charlie Wilson's War" feels gutted.

[Spoilers coming, though only if you don't know your history.]

We know the story is about the little-known US Congressman who helped push the CIA covert operation to aid the Afghan Mujahideen against the Soviets. Most moderately aware viewers will also know where the story goes from there, insofar as as it's a story with a happy ending that really isn't a happy ending.

If you know about little things like the Taliban, Al Qaeda and 9/11, the movie has an effective zinger of an ending, but Nichols' emphasis is still on the bright and satirical side of the story, rather than the political ramifications of the depicted events. I'm not 100% sure that Nichols needed to spell everything out at the end. Viewers will either be smart enough to get it or else they probably wouldn't appreciate the enforced history lesson anyway. I am, however, 100% sure that the last act of the movie over-relies on newsreel footage and statistics to push the narrative along and that the bookending device is unnecessary, especially since I wanted to interpret it quite differently from what Nichols seems to have intended.

I'm hoping to get my hands on the earlier version of the script soon, but I suspect that Universal (hopefully with Nichols' blessing) encouraged a peppier version of the film after seeing audience reactions to a number of 9/11 and Middle East-themed flicks in recent months. The decision was made to make a movie that wouldn't be partisan (Wilson was a Democrat, which may astound people who see the movie) and that wouldn't waste too much time on actual drama. I don't doubt that it'll pay off. "Charlie Wilson's War," as it now stands, is a comedy and stands a far better chance of both box office and Golden Globe recognition as a result. At this time of year, that's what the game is all about. That version of "Charlie Wilson's War" that might have gone from entertainment to barbed political classic? It'll have to wait.