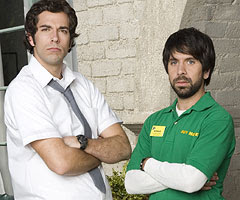 Several weeks ago, NBC subjected viewers to Green Week, but was Monday (Nov. 26) night the start of Apple Week on NBC?

Though the network has been feuding with Apple's iTunes service, NBC has been more than happy to suckle from Apple's corporate teat.

Of course, everybody on "Bionic Woman" has been using iPhones all season (albeit occasionally incorrectly), but Monday night's onslaught was especially impressive.

First, on "Chuck," we left Sarah choosing between the eponymous hero buzzing her iPhone and Matthew Bomer's not-so-dead Bryce calling on her landline. How could you *not* choose the guy calling on the flashier piece of technology?

Then on "Heroes," Monica's fully loaded iPod made a second appearance, this time teaching her how to break and enter. Yes, if you're an autodidact it's really useful to have that sortta thing at your fingertips. But if it's me and I'm gonna be breaking into a house occasionally populated by armed thugs, I'm gonna wanna watch the video featuring basic hand-to-hand combat first.

Finally, on "Journeyman," Dan found himself in a 1981 hospital emergency room where the doctors were particularly interested in his iPhone.

Anyway, follow through after the bump for my thoughts on last night's dreadful "How I Met Your Mother," plus the actual quality of last night's Apple-sponsored NBC dramas (thumbs up all around) and maybe even a bit on Sunday's rather awesome "Dexter" (but no guarantees)...

[I will, of course, be including spoilers here. So be wary, if you care-y.]

"How I Met Your Mother" -- I can tolerate that "HIMYM" whipped out a "Let's join a gym!" plot that felt like leftover "Friends" and that segued horribly into the episode's subplots. I mean really, Josh Radnor's in good shape, Alyson Hannigan and Cobie Smulders are tiny and Jason Segel has lost a lot of weight since last season and looks mighty fit. I can tolerate that the return of Wayne Brady as Barney's gay brother only produced punchlines around the meta-irony that Wayne Brady's character is gay, Neil Patrick Harris' character is straight and in real life those roles are in reverse. I can tolerate that the Victoria's Secret Fashion Show after-party looked like the lamest, brightest, worst designed gala in the history of the world (mostly cuz I have a massive crush on Miranda Kerr). You know what I can't tolerate? That the Barney-rebangs-his-First subplot was recycled 100% from last season's "Rules of Engagement," where David Spade's character got,um, intimate with Julie Walters to try reproving his mojo. I don't care if the plotlines were conceived 100% independently of each other and I don't care if the "HIMYM" execution was a smidge funnier than what happened on "Rules." If you're getting sloppy seconds from "Rules of Engagement," something is very, very, very, very, very wrong.

"Chuck" -- Josh Schwartz loves his holiday-themed episodes and it isn't surprising that the best post-pilot episodes of "Chuck" have been the Halloween-y "Chuck Versus the Sandworm" and Monday's "Chuck Versus the Nemesis." The episode's main business -- Bryce Larkin's returned from the dead and Chuck has to deal with his residual anger and decide if he can trust and protect his former friend -- was well-handled, probably a notch above some of the show's spy-of-the-week hijinx. What worked better, though, were the supporting plots -- Ellie Bartowski's family Thanksgiving dinner and Buy More's Black Friday sale. The dinner continued Julia Ling's transition from the show's secret weapon to a not-so-secret resource as her Anna got to showcase some wonderfully timed jealousy about Morgan's lust for Ellie's side dishes. [If you know what I mean.] The ep's two best lines came at dinner with Chuck's reaction to seeing Sarah and Bryce all a-smooch ("I'm thankful that Bryce Larkin is dead and is not currently in my bedroom making out with my new girlfriend.") and Ellie and Awesome's reaction to the disintegration of the festivities ("Honey, no more family dinners, OK?" "What do you think about a destination Christmas?"). Black Friday at the Buy More gave us the episode's best visual gag -- Big Mike's slo-mo counter vault -- plus several priceless moments of cowering from Lester and Jeff.

What else did I like? I liked that Bryce and Chuck's fluency in Klingon had both a set-up and a payoff. I liked the arsenal that Casey has set up in the Home Theater room at the Buy More. I liked that Bryce pretended he went to Penn. Oh and I like that NBC has picked up "Chuck" and "Life" for full seasons, assuming that anybody's ever allowed to write again. 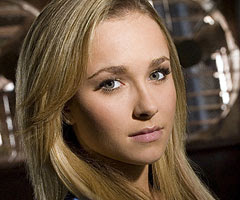 "Heroes" -- Here's the thing: If you waste five or six episodes at the beginning of the season and then suddenly start a countdown to a payoff, it's hard to make me feel like I'm ready for everything to tie up. "Heroes" tells me that next week will be the moment I've been waiting for, the climax to all of this season's excitement, but I've only been enjoying this season's plot for the past two or three weeks. Nothing they do next week is going to pay off wasting six weeks on Hiro in Feudal Japan. Nothing is going to pay off wasting six weeks on Peter forgetting his memory and hanging out on a bar set masquerading as Ireland. Nothing is going to pay off the slow journey of the Ying-Yang Twins across Mexico or the slow flirtation of Claire with Annoying Flying West. All of those things could have been covered in the season premiere and then we'd have gotten four or five more episodes to unfold the action. Grumble.

My favorite line of the episode was Peter's "The last time I saw my mother was a year from now," which reminded me of the time-twisting "Primer" bon mot, "You got anything to eat? I haven't eaten anything since later this afternoon."

But what I really want at this point is for "Heroes" to become two spin-offs: In one, Kristen Bell and Hayden Panettiere roam the country being short, blonde, perky and superpowered and everybody keeps thinking they're sisters. It'd be like a spunky distaff "Supernatural." In the other, Mohinder, Parkman and Sylar try their hardest to raise Molly while trying to avoid killing each other. It's be like "Three Men and a Little Lady" if Steve Guttenberg were a superpowered sociopath.

"Journeyman" -- With Miami and Pittsburgh playing the ugliest Monday Night Football game ever, all of NBC's Monday shows got a ratings boost. Except for "Journeyman." That there's the kiss of death. Too bad. It was another fine episode, though the amateur shrink psychoanalyzing of attempted killer/misunderstood child Aeden Bennett was a bit second rate. The big reveal of Dan's gift/curse to Jack was done so well that I liked Reed Diamond for the first time this season and I got exactly the desired shiver of recognition when it became clear that Paul Schulze's FBI Agent had been investigating time hoppers for a while. That character's fate was left up in the air at the end of the episode, though it's unlikely to matter.

"Dexter" -- At this moment, "Dexter" is the best show on TV. Even if we were subjected, on Sunday, to Keith Carradine's ass.