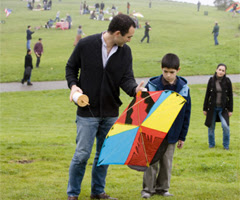 "The Kite Runner"
Director: Marc Forster
Fien Print Rating (Out of 100): 67
In a Nutshell: The last time Forster and screenwriter David Benioff teamed up, it was for 2005's "Stay," one of the most bizarre and misguided features ever financed, produced and then dumped by a major studio. I'm not going to try to advocate the merits of "Stay" -- it's a dreadful film, if you ask me -- but I fully expect it to eventually find a true and dedicated cult following somewhere down the road.

Forster and Benioff seem like a somewhat odd pairing to bring Khaled Hosseini's "The Kite Runner" to the big screen.

Everybody I know has already read "The Kite Runner" and I'm usually a big advocate of the "Read the book before seeing the movie so you can be one of those snobs who's all 'Well, the book was *better*" school of criticism. But I haven't read "The Kite Runner," so I can't tell you how the book and movie compare and which of my concerns with the film are the responsibility of the book or the other way around. So it goes.

Let's just say that the movie is decent, respectful and well-intentioned and despite all of the people who have been forced to read the book, it doesn't stand a chance of making a red cent.

The rest of my somewhat truncated comments after the bump...

While not quite on that pure fairy tale/allegory/parable level of veiled simplicity, "The Kite Runner" traffics very little on true complexity or ambiguity. It's a tale of redemption, of atonement, of setting things right. It manipulates and loads the dice at every turn, but despite the ultra-aggressive score by Alberto Iglesias, it felt less obnoxiously heavy-handed and more well-intentionally pre-determined.

Part of the problem, I'm just going to assume, is that Benioff has no space to let the narrative breath, so he has to spend roughly an hour setting up everything in the story so that in the second half everything pays off exactly as viewers will want or need it to. Hardly a prop or character or line of dialogue in the flashback to Kabul before the Soviet Invasion isn't a set-up for something to come when our initially uncertain and seemingly cowardly hero Amir (Khalid Abdalla) returns in 2000. The resulting storytelling is Dickensian in its contrivance without being Dickensian in its complexity. It was around two-thirds of the way through the movie that I realized that many of the core issues of "The Kite Runner" are the same as the concerns of Michael Haneke's "Cache," only replacing Haneke's darker, more confusing and conflicted plotting with -- not necessarily meant as a pejorative -- warm mush.

The performances, more than anything else, ground the movie, particularly the unaffected work by the inexperienced thespians playing the younger versions of the main characters. Homayon Ershadi, as the main character's initially distant and disappointed father, gives the most actorly performance, though he gets no benefit from some half-hearted attempts to age the character over the decades. I'm also always pleased to see "Hate" and "Three Kings" co-star Said Taghmaoui, though his character is a main trigger to the film's least plausible sections.

It's a somewhat consistent hallmark of Forster's work -- from "Monster's Ball" to "Finding Neverland" -- that he gets undone by the pressures of structure. "The Kite Runner" is at its best in just capturing the nuances of 1978 Kabul versus 2002 Kabul and the kite-flying scenes are gorgeous, though their inevitable reliance on computer effects places them outside of the style of the rest of the movie. When a random action movie intrudes toward the end, though, Forster is unable to make it feel like anything other than an intrusion.

If I'd written this review *immediately* after leaving the movie, I'd probably have gone a bit more negative, but the film's sweet and emotional core lingered with me for a while afterwards.

I think I could go on, but I'd rather eat lunch.