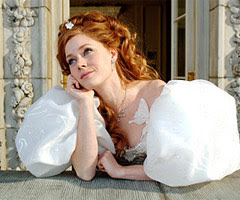 "Enchanted"
Director: Kevin Lima
Fien Print Rating (Out of 100): 58
In a Nutshell: [Favorite Overheard Conversation while sitting in the theater waiting for "Enchanted" to begin: Two college-aged girls sitting behind me lamenting the absence of good romantic comedies. One, obviously the more intelligent, said that the best she'd seen this year was "Once" (I won't get into whether or not that was a comedy). The friend hadn't heard of "Once," but without skipping a beat she declared, "I wanted to see 'Love in the Time of Cholera,' but I really wish they'd given it a different name. It sounds so depressing!" I don't wanna make it sound like I'm mocking that bubble-headed girl. To date, "Love in the Time of Cholera" has made less than $3.5 million domestically and could not possibly have done any worse if it had been retitled "Love in the Time of Cotton Candy and Carnations."]

I haven't even started my review and I've already knocked points off my overall rating three times.

The message is simple: If "I'm Not There" is a movie that invites you to think about it and mull its thematic and stylistic choices (not necessarily to its advantage), "Enchanted" is a movie where you should bop yourself over the head with a frying pan three times after seeing it. That way you can remember the mush-headed love story and hopefully Amy Adams' performance and avoid anything else. I'm not being completely fair. "Enchanted" is a movie that was made for children and my only quibble is with one or two reviewers causing me to believe it might be fun for all ages.

I understand that my problem here is my lack of whimsy, though I defy anybody who's watched me get misty-eyed watching "Babe" to make such a claim.

Additional grumpy thoughts after the bump.

[You're gonna get spoilers here. They're intuitive spoilers -- I mean, Amy Adams' possible love interests are played by James Marsden and McDreamy -- but spoilers none-the-less.]

Anybody wanna feel old? "Pretty Woman" came out more than 17 years ago.

That movie is, of course, about a young woman who begins in the real world -- or as real as any world in which hookers look like Julia Roberts -- and is thrust into a magical world, in which everything she sees fills her with the exact same wide-eyed amazement. In the end, she says "I want the fairy tale!" and that's exactly what she gets.

Since that time, there have been three or four major pop culture references -- most prominently in "She's All That" to to romances as swoony as "Pretty Woman" except for that hooking thing.

I'm not sure if I've seen any critics talking about how "Enchanted" is a reversal of "Pretty Woman," with both working on a similar "Cinderella" structure.

"Enchanted" is about a young woman who begins in a fairly tale world -- or at least some absurd world in which Disney can still make money off of traditional animation -- and is thrust into the gritty real world (or actual Manhattan looking so sterilized that it might as well have been a studio set), in which everything she sees fills her with the exact same wide-eyed amazement.

In that respect, I'm not sure if "Enchanted" is more of a chick flick aimed at 11-year-old girls, or a cautionary tale aimed at 30-year-old women. Given the nefarious way that Disney flicks so often work, it could be both. Embrace the fairy tale! Give up the fairy tale! Your prince is out there! Sometimes your prince might be a bitter lawyer with a kid! Mixed messages, baby.

If Bill Kelly's gentle, inoffensive script is all over the place thematically, Kevin Lima's direction keeps the movie grounded in all the wrong ways. It's one thing to attempt to draw a contrast between the pastel-y land of Andalasia and the realities of post- Giuliani New York (scary, but in a commercially viable sort of way, rather than the way it used to be), but Disney is too invested in New York City for it to be depicted as truly threatening. So it's neither magical nor ultra-real. It's just flat. Lima directed the underrated animated "Tarzan" and came out of animation, but nothing on his live action resume -- including "102 Dalmatians" and two "Eloise" telefilms -- suggests he understands the pacing or composition of reality, much less bring an animated sensibility to the table.

In the real world, "Enchanted" too often strolls along, like it's in a tight corset, or an unwieldy hoop skirt. The pacing perks up only in several musical numbers, a very funny cleaning song with roaches and rats and a somewhat less entertaining romantic ballad in Central Park.

Amy Adams is remarkable, but it isn't at all difficult to think of performances that are similar. Beyond Roberts in "Pretty Woman," you could look to Tom Hanks in "Big" or Daryl Hannah in "Splash" or even Jennifer Garner in "13 Going on 30." "Enchanted" is a better movie than "13 Going on 30," but it's worse than "Big" or "Splash."

Actually, let's give her even more credit. "Enchanted" is her movie completely. She sings (perfectly), dances (convincingly) and she cooks and cleans. Playing everything at a heightened level, she conveys both broad comedy and true sadness. Some people will know that this is just an extension of her Oscar nominated "Junebug" performance, but not many.

Of course, "Enchanted" was a script that couldn't have been made without Adams and part of the reason for that is that certainly no A-list male star would take on either of the two main characters. As Prince Charming, James Marsden gets to have fun, at least. His character is the same as Adams' in the beginning, only he doesn't get to go through any transformation. Patrick Dempsey's character, though, is just a miserable pill and nothing in either the writing or Dempsey's interpretation gives any justification for why it might be a good thing to make this man happy.

I dislike any romantic comedy which forces me to root for the leading lady to ditch both of her hunky options and run off with a chipmunk.

That feels like a good place to stop, especially since I have to recap "The Amazing Race" for Zap2it, plus watch the latest Patriots demolition. However, I have one last question, but it's a little more spoilery, so don't bother reading if you haven't seen the movie.

[You've been warned... One thing that annoyed me more than anything about the film's mixed message was the near-climactic shopping spree/montage. Adams' Giselle has established herself as a woman table of turning any available fabric into a gown that, as the very end of the movie tells us, puts most designers to shame. Why, then, in order to become a REAL WORLD princess, must she pile up thousands in credit card debt for a makeover that turned her into a lovely, but much less unique, beauty? I understand that in "Pretty Woman," Julia Roberts had to go out shopping on Richard Gere's dime to replace her whore clothes, but that was because she couldn't sew or talk to vermin.]
Tweet