NetflixWatch: "Away From Her," "Black Book," "Reign Over Me" 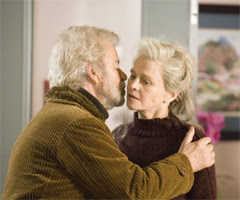 Rather than dedicating large chunks of my weekend to complaining about this week's "Friday Night Lights" (a better-than-average episode, though Landry and Daddy Landry burning his car was a stupid way to solve a stupid plot twist and it's all just going to feel like throwing good money after bad until we can just start pretending it never happened), I watched Netflix movies. For the first time since I'm not sure when, I actually cleared out all three of my Netflix movies this weekend.

So follow through after the bump for my relatively brief thoughts (capsule reviews, really) on Sarah Polley's "Away From Her," Mike Binder's "Reign Over Me" and Paul Verhoven's "Black Book."

"Away From Her"
Director: Sarah Polley
Fien Print Rating (Out of 100): 73
In a Nutshell: Maybe just a Lifetime Original movie about Alzheimer's, but the best darned Lifetime Original movie about Alzheimer's you're ever likely to see. Julie Christie's Oscar nomination seems like a foregone conclusion, but as impressive as she is, the idea of recognizing her and not her foil Gordon Pinsent is ridiculous. Her performance is heartbreaking and fragile, but it's a variation on Alzheimers patients we've seen on the big and small screen before. There's a complexity to what Pinsent does here that deserves more of a salute. Polley has made a mature and confident directing debut that never feels like its her first feature, though there are one or two moments (the scene where the characters get outraged by news footage of American troops in Iraq) where the famously left-wing actress feels like inserting her own voice. This is also the most overtly Canadian film American audiences are likely to experience this year, from the accents to the hockey to the Neil Young on the soundtrack. I'm not the target audience for this movie, obviously, but it moved me. Side note: Is this Olympia Dukakis' best performance since winning her Oscar for "Moonstruck"? Almost certainly. 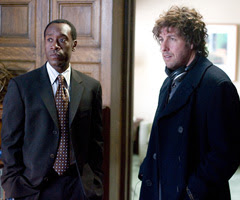 "Reign Over Me"
Director: Mike Binder
Fien Print Rating (Out of 100): 51
In a Nutshell: I can't express how much my interest in this movie dwindled once the filmmakers caved to studio pressure and changed the name from "Reign O'er Me" (a reference to The Who song that features extensively in the soundtrack) to "Reign Over Me" (a reference to absolutely nothing). This was never going to be a hit anyway -- Adam Sandler being all serious and looking like Bob Dylan? Really? -- so they might as well have stuck to their guns and kept the real name. There are plenty of reasons to like "Reign." Adam Sandler is committed to his emotionally battered character, Don Cheadle is rarely less than exceptional and the use of New York City locations is exemplary. But the movie stumbles along structurally, with the passage of time never really working. Also, writer-director Binder's female characters here -- played by Jada Pinkett Smith, Liv Tyler and Saffron Burrows -- are never integrated into the story and they only pop up when Binder the Screenwriter needs them. Burrows' character is particularly horribly written. As I said, some pieces are heart-felt, but nothing holds together. 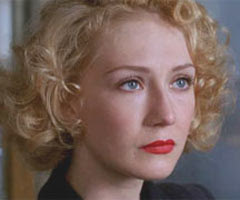 "Black Book"
Director: Paul Verhoven
Fien Print Rating (Out of 100): 64
In a Nutshell: You can either mock Paul Verhoven for retreating to Holland to rediscover his craft on what is, essentially, a by-the-numbers WWII thriller or you can stop and think of when you last saw a WWII thriller as twisty and as well-executed as "Black Book." This is just an action adventure, but American audiences will shy away because they don't wanna read their movies. Weenies. Given how little interest Verhoven has in the actual history here -- all issues of religion or national identity relating to end-of-the-War Holland are superficial at best -- there's no excuse for "Black Book" having a running time of nearly 150 minutes. Verhoven is still close to a master at building tension and working with what must have been a massive budget by Dutch standards, he makes "Black Book" look like a spiffy studio production. Verhoven's also a total schlockmeister and he wastes no opportunity to make leading lady Carice van Houten bare her bosom (like he thinks himself an art house Joe Francis). Not only does van Houten have a phenomenal body, she's also up to the acting requirements of an interesting role, so she isn't just flesh-on-display like, say, Elizabeth Berkley in "Showgirls." Sebastian Koch was good enough in this and "The Lives of Others" that I look forward to seeing him rendered utterly generic by some Hollywood romantic comedy in which he plays the sensitive Euro-man who sweeps Nicole Kidman/Renee Zellweger/Sandra Bullock off their feet.