Whenever I used to play Tecmo Super Bowl, I'd always play the San Francisco 49ers. Yes, Bo Jackson or Lawrence Taylor or Christian Okoye used to be better individual players, but there was an incredible simplicity to dropping back with Joe Montana and going to Jerry Rice and John Taylor. They were always open and you could score every single time down the field. I never figured out how to play defense, because it was never necessary.

I bring that up because I'm watching the Patriots and the Bills and I have to believe that being their offensive coordinator at this point is like playing Tecmo with the 1990 San Francisco 49ers.

Random digression aside, I didn't make it out to the movies this weekend. Karma conspired to keep me away from both "Beowulf" and "Southland Tales," my two cinematic targets of choice. Either film probably would have given me a headache anyway.

For the second consecutive week, though, I managed to plow through a trio of Netflix movies. Huzzah.

Following the format I set last week, follow through after the bump for truncated capsule reviews of "Civil Duty," "Severance" and "1408." 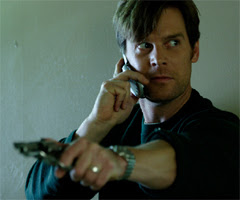 "Civic Duty"
Director: Jeff Renfroe
Fien Print Rating (Out of 100): 49
In a Nutshell: If "Civic Duty" had been made in 2002, it still would have felt like a less slick (and also less compelling) knock-off of "Arlington Road," but at least its "Racial profiling is dumb" message would have been a bit edgier. As it is, director Jeff Renfroe and writer Andrew Joiner aren't going out on any limbs, though they get good performances from a cast seemingly culled from Aaron Sorkin's Traveling Players (Peter Krause, Richard Schiff and Peter Krause). As a naturally and instinctively idle person, I can't understand the new cinematic phenomenon of the shut-in who goes crazy after a day or two of minor confinement and instantly begins suspecting his neighbors of being killers, terrorists or porn stars. With "Disturbia," at least it was intended as a kiddie version of "Rear Window," not necessarily filled with humor, but something short of self-serious. "Civic Duty" is well crafted, but takes itself so obnoxiously seriously that it becomes unwatchable relatively early on. I kept waiting for one last twist where the filmmakers would remember that they were making a thriller, not an Important Social Drama, but no dice. I've written three different twist endings that would make the movie much more engaging and I'll share them after the writers strike is over. I'm not a scab. 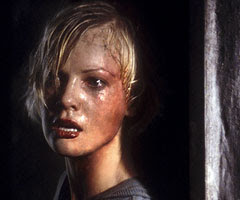 "Severance"
Director: Christopher Smith
Fien Print Rating (Out of 100): 61
In a Nutshell: This one never really got released in the States, but I saw a trailer and was intrigued by the premise -- "The Office" [the British version] means "The Hills Have Eyes" -- and by a cast that features Laura Harris in the lead. Fluidly combining awkward British humor with the trappings of gory torture porn, "Severance" is an absolute hoot for nearly an hour before it just becomes a cut-rate version of "Hostel" complete with an anti-military/industrial complex message that it intellectually can't support. Harris, whose comic gifts are mostly going untapped on "Women's Murder Club," is fetching and capable of being both humorous and a fine scream queen. Also strong are familiar British faces including Toby Stephens, Claudie Blakley, Tim McInnerny, Andy Nyman and Danny Dyer. Director Christopher Smith comes close to getting the sort of parody/emulation thing that Edgar Wright and Simon Pegg achieved on "Shaun of the Dead" and "Hot Fuzz" and I'll be interested to see what he does next. Doesn't quite live up to the premise, but there's fun to be had. 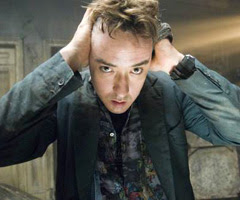 "1408" (the "Director's Cut," if anybody cares)
Director: Mikael Hafstrom
Fien Print Rating (Out of 100): 38
In a Nutshell: Like "Severance," "1408" does its set-up better than the follow-through. For 25 minutes, director Mikael Hafstrom (far better here than with "Derailed," his English language debut) establishes his main character (John Cusask, giving the film far more than it deserves) and the main premise (Don't Go Into Room 1408!!!). Then the main character goes into Room 1408. Once in the room, Cusack's character makes a comment about the banality of evil, a truism that Hafstrom instantly forgets. When Room 1408 is scary because of the sound effects, camera angles and a ghostly turn-down service, the movie shows potential. Then everything goes haywire. It snows! There's a flood! There are flickering ghosts! And the more Hafstrom shows, the less scary the movie is and the less ambiguity Cusack's performance has to convey. I wonder if there wasn't some way for the production to make better use of Samuel L. Jackson (and for the marketing department to resist putting SamJack's face on the poster for what's really a cameo). I understand that the theatrical cut has what appears to be a happier ending. From what I can tell, it sounds like *both* endings stink.