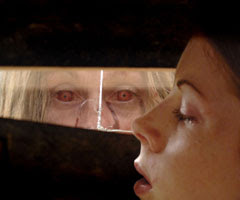 "28 Weeks Later"
Director: Juan Carlos Fresnadillo
Fien Print Rating (Out of 100): 66
In a Nutshell: First order of business, before I start talking about this movie at all, the young stars of "28 Weeks Later" are named Mackintosh Muggleton and Imogen Poots. Are those the two greatest British names ever or what? Don't you just want to send Mackintosh and Imogen into battle with Lord Voldemort like tomorrow? I do.

There have been some slightly hyperbolic reviews arguing that Fresnadillo has made a better movie than Danny Boyle's original, which helped introduce the concept of speedy zombies to the world and therefore apparently reinvigorated the genre. I don't buy that. There's no question that "28 Weeks Later" is a nicely compressed rush of a movie, a quarterhorse, if you will. It sprints out of the gate, allows for a brief character establishing lull and then zooms for the rest of its duration in seemingly no time at all. Fresnadillo has the advantage of being able to work with Boyle's initial template, which refined the conventions of the horror film for the digital age, generating terror through jittery hand-held camerawork, strategically used blaring music and even more strategic spells of unexpected silence. He also has the advantage of the very carefully established universe that Boyle and writer Alex Garland created. Fresnadillo and his co-writer Rowan Joffe are at their best when they're refining that universe, establishing the rules of a post-plague London in which the United States military has been entrusted with keeping security in a country to which they feel no emotional attachments. Does that sound familiar? It probably should. The allegory in "28 Weeks Later" may not go deep enough for my tastes, but one thing is made abundantly clear: The United States shouldn't be an occupying force on foreign soil or else bad things will happen.

The movie's flaw for me, unfortunately, is the incredible laziness of its plot mechanics, which are so clumsy as to force me to discuss logic in a genre where clearly that isn't the ideal state of affairs. If you're a writer, you're sitting in a room and you're saying things like "What could we do to make Rage [that plague thing] return to London?" and you go "Well, the kids could somehow sneak across the bridge, avoiding the watchful eyes of the US military and contribute to bringing it back..." and then somebody would say "Well yeah, that could work, but it's a pretty stupid thing to set up... Let's leave it there until we come up with something better." And then nobody did. The movie is just full of things that make no sense, even with the low level of logic required to operate in a Romero-inspired universe. And every time somebody would take a narrative shortcut that didn't make any sense, it would crush the movie for me for a couple minutes.

What else did I like? Robert Carlyle does very fine work as the plausibly cowardly father at the film's center and Poots and Mackintosh are better than your typical expectations for children in the genre. I was also impressed with how effortlessly authoritative and likeable Jeremy Renner was, given that he has no actual character in this movie (American soldier-with-conscience) and that his career arc has included studio bad guys ("SWAT"), serial killers ("Dahmer") and other unsavory types.

I loved the use of London's fin de siecle architecture as a representation of modernist hubris -- billions spent on bridges, domes and buildings that less than a decade later would stand as a mocking memory of 20th century humanity's wastefulness for what remains of 21st century humanity. Honestly, I go see these movies for the images of evacuated London. Zombies or no zombies, I love that city.

Oh and there's one spectacular horizontal wipe in which the encroaching zombies literally push Stringer Bell... er... Idris Elba's face off the screen. It may be the most appropriate and effective use of the editing wipe I've seen since I don't know when.