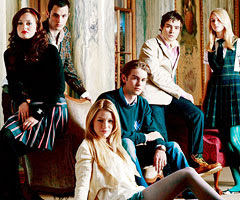 [As I mentioned with my glimpses at the NBC pilots, these aren't intended as reviews. Heck, they're *not* reviews. Far from it. That wouldn't be fair. The networks have four months to reshoot, recast, reedit, reconceive and perhaps totally scrap (Sorry, "The Wedding Album") these pilots. Thus, I'm just giving some initial gut reactions.]

[Author's Note: If you don't understand the Eric Balfour thing by now, I may not be able to help you. That being said, I'm having a hard time casting Balfour in the pilots I've seen so far. I'm not sure why not. Apologies in advance.]

Also be sure to check out Sepinwall's similarly not-reviews of these same shows. We may have the exact same opinions on everything, but we totally use different adjectives and occasionally adverbs (all nouns, however, are duplicated).

Click through for a first glance at "Reaper," "Gossip Girl," "Running Wild" and "Aliens in America." 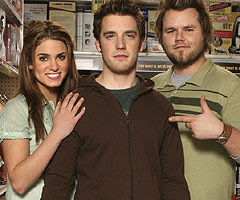 Show: "Reaper" (The CW dramedy)
Pitch: You know those episodes of "The Simpsons" and "Family Guy" where Homer or Peter briefly took over for the Grim Reaper? How 'bout a whole series like that, only with an attractive 20-something male lead. Alternatively: "The Loop" only with less Mimi Rogers and more Satan.
Quick Response: If you liked Bret Harrison on "The Loop," you'll like him here. The premise of a Gen Y slacker suddenly having to do The Devil's dirty work seems versatile and the pilot is a breezy hoot, well-directed by Kevin Smith (words you don't usually utter), who packs the screen with deadpan details. The casting of Ray Wise as Satan is a treat. The only way Tyler Labine's gregariously lazy sidekick could be more obviously Jack Black inspired would be to have the character be the frontman of the greatest rock duo in the world and he may be trying a bit too hard. I like the casting of Nikki Reed as the lead's dreamgirl, conveying both intelligence and off-kilter charm rather than the more obvious attributes of a typical CW bimbo (rumor has it that the network may be contemplating recasting the part with a typical CW bimbo... hope not). If The CW people are smart, they'll give some thought to where they can move "Reaper." This is a show that deserves the chance to succeed, but going up against "House" and the markedly similar "Chuck" on NBC, it'll have a tough go of it.
Desire to Watch Again: Strong.
Possible Role For Eric Balfour: Nothing, really. If he isn't already, he could be a minion of the Devil. 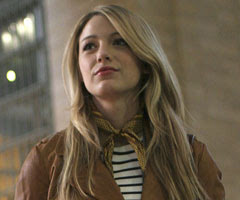 Show: "Gossip Girl" (The CW drama)
The Pitch: Remember that "Cruel Intentions" pilot ["Manchester Prep"] that FOX didn't pick up but that became the really bad "Cruel Intentions" sequel? Make it a little less trashy and a bit smarter.
Quick Response: I'm always happy to welcome a decent high school soap into my life and with "The O.C." gone and "Hairy Palms" due for near-instant death, this should fit the bill. And how nice that it just happens to come from Josh Schwartz and Stephanie Savage of "The O.C." fame. I'm told that it comes from a series of books and that the teenage girls are ga-ga over 'em, but I don't have a Sidekick or a MySpace page, so I'm probably not in tune with them anyway. Since we're dealing with snotty New York private school kids, it's important that the leads not be insufferable. Here, the main characters look to have been well-cast, particularly Penn Badgely (who I've never previously liked on any of his WB shows), Leighton Meester (memorable as the doc's Lolita-esque stalker on "House") and Blake Lively (who has the disadvantage of photographing at least five years older than the rest of the cast, even if she's actually younger). A bit more disturbing is Cindy Lou Who (Taylor Momsen), whose character is in danger of being sexually assaulted in the pilot. Will Schwartz and Savage be able to keep the parents (represented mostly by Kelly Rutherford and Matthew Settle in the pilot) involved in the story? And is there a line they can't cross with representations of teenage drinking and sexuality?
Desire to Watch Again: Relatively strong. I'm not the target demo, but I'll tune in provided the show remains smart enough.
Possible Role For Eric Balfour: Geez. Out of luck again. 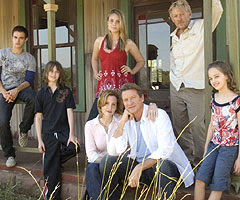 Show: "Life Is Wild" (The CW Drama)
The Pitch: It's "7th Heaven" if you replace Jesus with Nelson Mandela and Beverly Mitchell with a dingo (All together now... "Who'd know the difference?).
First Impression: A show that the entire family can watch together that teaches important lessons about South African culture and nature? Nice. I feel bad making fun of that. Unfortunately, "Life Is Wild" (my screener reads "Running Wild") is shot on digital video and all of the pleasures of the location shooting and Real Live Animals are undone by how low the production values are. Sepinwall liked the scenery and wildlife, but for the visual cheapness, they might as well have shot at the San Diego Zoo. Also, I'm a bit sad that Rutger Hauer bailed on playing the crotchety South African grandfather, because the guy who replaced him is no Rutger Hauer. Since I came into the pilot with a healthy distrust of poachers, money-driven lodge owners and wounded feral lions, I'm not sure I'll need to tune in again.
Desire to Watch Again: Minimal, but if "7th Heaven" fans want to gather around to watch on Sunday nights, I'll try to only mock a little.
Possible Role For Eric Balfour: Can you see Eric Balfour as an evil poacher? I can. No part in the pilot, though, is ready made for him. 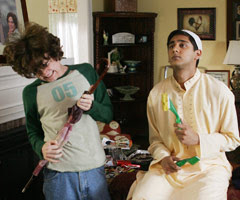 Show: "Aliens in America" (The CW comedy)
The Pitch: A Muslim in Wisconsin?!?!? How can something so crazy not be hilarious? [My own personal sitcom about being a Jewish teen in Mississippi has many of the same punchlines.]
First Impression: Dan Byrd was one of the few cast members of "The Hills Have Eyes" that I didn't want to see get eaten by mutant cannibals and he's a good Everykid entry point into the series. The pilot, which has been sitting on the shelf for a year, is laced with a bizarre vein of humor and I may need to tune in for a couple weeks just to see if they explain the story of the clown who died in the main family's living room. People concerned that "Aliens" mocks Muslims or people of Middle Eastern lineage need not be concerned. Nope. It just mocks ignorant small town Midwestern white folks, which is totally kosher I guess. The outcast kid narrating his adventures being picked on in school may be played out by this point, but at least "Aliens" is compatible with "Everybody Hates Chris."
Desire to Watch Again: Low. If The CW sends out screeners, I might check out another episode or two.
Possible Role For Eric Balfour: Sorry. This just isn't your year at The C-Dub, Balfour.