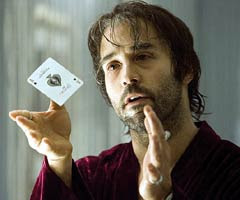 "Smokin' Aces"
Director: Joe Carnahan
Fien Print Rating (out of 100): 25
In a Nutshell: Just as I was at a total loss to explain the career leap that Joe Carnahan took between the 5th generation Tarantino knock-off "Blood, Guts, Bullets and High Octane" to the moody and mature "Narc," it's equally hard to figure the regression between "Narc" and Carnhan's long-delayed third feature "Smokin' Aces."

I'm going to blame Tom Cruise, though I'm not sure why. Perhaps if Carnahan hadn't dropped out of "Mission: Impossible III," he wouldn't have had to waste a movie restretching his creative muscles, which is a kind way of describing "Smokin' Aces." Since Carnahan is attached to a couple projects I'd really like to be good (James Ellroy's "White Jazz," in particular), I'll hope he's ready to get back to business with this out of his system.

There are certain films from this recent 10th or 11th wave of Tarantino knock-offs where I may not have liked them, but I could respect the audacity of their visions. I put Wayne Kramer's "Running Scared" and Tony Scott's "Domino" in this class. As much as I hated it, I'd almost even suggest that there aesthetically interesting things about "Crank." "Smokin' Aces" isn't in that group. It's just a bad movie, a loud, disjointed wreck of a movie that commits the most obvious of cardinal sins for this genre -- it makes mayhem and violence monotonous.

There's around 15 minutes of fun carnage around 2/3rds of the way into the movie. That's followed by a thuddingly stupid 20 minute denouement, which mostly consists of Andy Garcia giving a lengthy monologue that's supposed to be surprising and twisty, but since the reversals and revelations all involve characters I never cared about in the first place, I didn't shockingly start to care.

There are five or 10 or more different films at work here with enough different A-and-B list actors as you could ever possibly want. Very few of them give actual performances (Jeremy Piven does, as does Taraji Henson), but you can see why most of them would sign on. For some it was a chance to pick up a paycheck for wearing funny wigs or fake facial hair without having to actually act (Matthew Fox and Ben Affleck fit in this category). For some it was a chance to spend a day or two playing against type without having to commit to a part for anything longer (put Ryan Reynolds and Jason Bateman here). For some it was a chance to dip their toes in different professional waters knowing that if they screwed up, they'd hardly be noticed (Alicia Keys and Common, who prove no worse or better than most of the "trained" thespians). Heck, some scene to have walked onto the set from a totally different movie, acted a scene or two and vanished (Garcia and Ray Liotta ought to have better things to do with their time). Mostly, everybody probably suspected that worst case scenario, the movie would be cut to bits in post-production so completely that they were being paid to be barely visible blurs.

Word to future filmmakers: If your movie is supposed to end with Ryan Reynolds having a five-minute emotional epiphany, you've already lost the war.
Tweet