Take Me To The Pilots '07: NBC Dramas 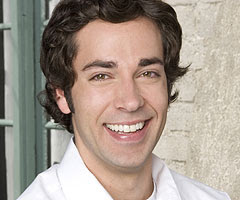 [As was the case when I did this last year, these aren't intended as reviews. Over the next four months, the networks will recast, reshoot and otherwise doctor many or most of these pilots. Some will be shorter, some longer. Some will be better, one or two worse. These are, however, my first impressions.]

[Author's note: In reviewing last season's pilots, I made it my quest to get work Eric Balfour, due to my appreciation for his status as one of TV's most frequently cancelled leading men. Balfour didn't get added to a pilot, but he returned to "24." Then he got cast in a pilot and killed off "24" and his pilot didn't get picked up. With more genuine "Fien Print" favorite Kathleen Robertson doing a Sci Fi miniseries and another season of "The Business," it looks like we'll be back on the Balfour Beat this spring.]

Click through for an early glimpse at "Chuck," "The Bionic Woman," "Life" and "Journeyman." 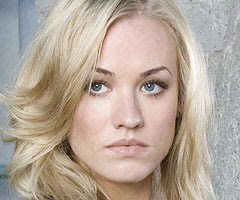 Show: "Chuck" (NBC dramedy)
Pitch: "Office Space" meets "Mission: Impossible"
Quick Response: "Chuck" is the only pilot on NBC's roster that I would categorize as "likeable." Written by Josh Schwartz and directed by McG, is a nice blend of action and comedy and it zips along effortlessly. As everybody will doubtlessly mention, leading man Zachary Levi is cut from the Adam Brody cloth and delivers Schwartz's dialogue with the same charm (he's also bigger than Brody, which will pay off if he has to travel the world fighting terrorism). I don't know what genetic experiment gave a nice Jewish boy like Chuck a button-nosed sister like Sarah Lancaster, but it's all good. Sepinwall's already noted the similarities between co-star Yvonne Strzechowski and former "O.C." lesbian love interest Olivia Wilde, which I think is reductive. Strzechowski is more like a cross between Olivia Wilde and Erika Christensen, with Wilde's metabolism. She spends much of the pilot in her underwear. Far more dressed, but perfectly cast, is Adam Baldwin, who was born to play dead-pan G-men. I'm a little unsure where the show goes in subsequent episodes.
Desire to Watch Again: High.
Possible Role For Eric Balfour: I'm just relieved he won't be playing Chuck. Nothing else really matters. 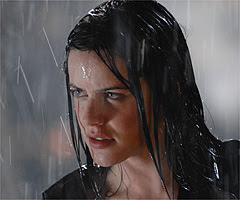 Show: "Bionic Woman" (NBC Drama)
The Pitch: "There's this woman and she's bionic." "Oh, like 'The Bionic Woman'?" "Yes. Exactly."
Quick Response: The camera likes leading lady Michelle Ryan a lot and of all of NBC's Brits-playing-American, her accent is the least distracting. I'm struck, and probably surprised, by just how seriously producer David Eick and writer Jason Smilovic are treating this material. I know that you don't want to go full-on camp, but we're dealing with bionic limbs and healing nanobots and other outlandish silliness, but I guess the laughs will have to wait. Now that "Jericho" has officially been cancelled, can we get Shoshannah Stern in to replace Mae Whitman as our hero's deaf sister? And steps will have to be taken to make male lead Chris Bowers less, um, dull. But you know who isn't dull? Katee Sackhoff, whose ridiculously charismatic turn as the rogue original Bionic Woman will have many viewers (and not just "Battlestar" fans) wishing the show was about her.
Desire to Watch Again: Surprisingly high. The pilot may have been a bit self-serious, but it zipped by and the action scenes were superior.
Possible Role For Eric Balfour: Nothing in the pilot jumps out, particularly since I like the race-blind casting of Will Yun Lee as designated Bionic Woman wrangler. Future episodes, though, are bound to require a tech-savvy guy to check our heroine's vital signs, if you know what I mean... 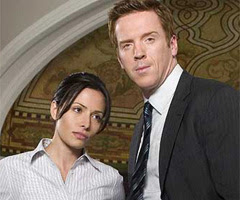 Show: "Life" (NBC drama)
The Pitch: "It's 'Unfrozen Caveman Lawyer: The Series' only instead of a lawyer, he's a cop and instead of being unfrozen, he's just been released from 12 years in jail for a crime he didn't commit."
Quick Response: Damian Lewis is a great, great actor (check out "Band of Brothers" or "Keane") and he's got the kind of driven, manic lead role that you'd expect to see in a British series. His American accent is clunky, but I can't imagine any actor better underplaying the impossible quirkiness of this character. He's been away from society for 12 years and every bit of technology confuses and amazes him. He's also particularly excited by the easy availability of fresh fruit. He's also read books on Zen. We know these things because they're repeated over and over and over and over and over and over and over and over and over again in the pilot. He's not just quirky, he's QUIRKY! Lewis' character is so big, it's actually a relief that he's paired with the petite Sarah Shahi, whose acting abilities remain -- let's just say -- unproven. Her character also is full of obvious writerly tics -- she's recovering addict hanging onto her job by a thread. Melissa Sagemiller and Adam Arkin are in a totally different show, but they pop up here and there.
Desire to Watch Again: Moderate-to-high, completely because of Lewis. I'm going to hope that the myriad redundancies of the pilot were just about laying the foundation and things will be get better. If not? I'll be out soon.
Possible Role For Eric Balfour: Well, Balfour did a CBS LAPD pilot that didn't get picked up, why not bring that character over to this show. He could be a brash young cop who trusts Lewis' character when nobody else does. Or something. 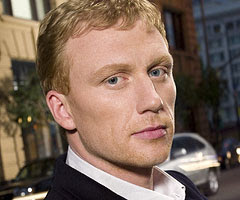 Show: "Journeyman" (NBC drama)
The Pitch: "Early Edition" meets "Quantum Leap"
Quick Response: I've seen "Day Break." I've watched "Day Break" and "Journeyman," it's not that you're no "Day Break," but have I mentioned that I've seen "Day Break"? Kevin McKidd plays a journalist who keeps popping back to different parts of the past, where he's supposed to do something to somebody to either prevent something from happening or to make something else happen. Or something. I stopped caring about anything early on except for the fact that, like "Day Break," it's another TV show about people going back in time to try to save Moon Bloodgood's life, forcing viewers to utilize similar audio clues (musical cliches and sports results) to keep track of the narrative. McKidd has the requisite star presence to carry a show like this (more than Taye Diggs, at least), even if his American accent is downright weird. And I'm happy to watch Bloodgood. But is anybody else in this show? And does anybody have any idea of the mechanism or purpose behind the main character's time travel? It became too much work for me in a hurry.
Desire to Watch Again: Moderate. I'll definitely watch a second episode, but no promises on a third.
Possible Role For Eric Balfour: Since I didn't notice any supporting characters in the pilot, I have no idea what Balfour could do. He could replace all of them, for all I care.