'Idol' Voters Do Little to Improve the Finale 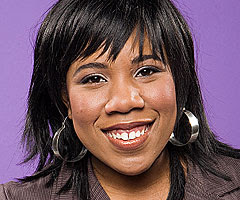 What to say about this week's "American Idol" results?

Well, I guess the first think that must be said is "Gee, I hope the 'American Idol' Songwriting Contest yielded at least one entry that includes beatboxing."

And the second thing that everybody'll be saying is "Oh, it's totally better that she didn't win, because now she can make the album she wants to... blah... blah... blah."

It's what we always say when somebody we think is particularly talented goes home on "American Idol." It was the case for Chris Daughtry, so it's got to be true of everybody, eh?

I don't think it's going to be true for Melinda. This year's Top 24 and Top 12 was so middling that it became clear early on that there was no obvious slam-dunk wire-to-wire winner, no Carrie Underwood or Fantasia Barrino. That standard line about how all of the people in the Top 12 will get contracts and sell albums because they all have big fan bases ("Just look at Bucky Covington!") may not be true with this group. Stephanie Edwards had the third best voice in the Top 12, but does anybody really remember her and is anybody clamoring for her album? Does anybody truly believe that LaKisha has a commercial breakthrough in her? Haley Scarnato?

This year's winner may truly need the imprimatur of being an "American Idol Winner" to sell albums. Sure, Melinda could somehow find the right songwriters, the right producers and she could record a good CD. She's got the voice for it. But she had the best voice in the competition and it wasn't enough for her to top Blake Lewis, with his half-octave range and decades-old vocal turntablism, or Jordin, who I don't have any major problems with except that she's not as good as Melinda.

Anyway, though, that's about all I've got to say on this subject. It was the wrong result, but what can you do? Nothing. Melinda was the most talented person the stage tonight and the second most talented wasn't Jordin or Blake or that guy from Maroon 5. It was Elliott Yamin, whose new teeth and new haircut might have turned things around if he'd had them last year.