Take Me to the Pilots '07: CBS Edition 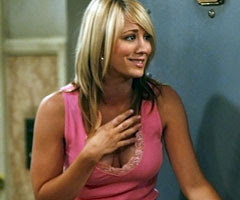 [Note: By now I'm sure you've gotten the point that these pilot first impressions aren't reviews. There are a lot of things that happen before a pilot makes it on air. If memory serves, there's even a Schoolhouse Rock anthem about all of the recasting, reediting and additional tweaking that occurs between pick-up and premiere. Thus, it'd be wrong to do a formal review. Got it? Good.]

[Tertiary note: CBS opted not to send out "Moonlight" (the female lead is being recast and it was only a presentation to begin with) or "Kid Nation."]

[Quaternary note: As always, check our Sepinwall's eerily similar impressions. I seem to have beaten him on the CBS pilots. I hope that doesn't mean that he's dead.

Click through to find first looks at "Cane," "Viva Laughlin" and "Big Bang Theory" after the bump. 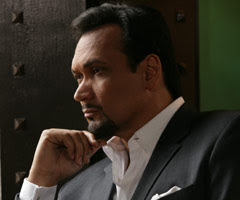 Show: "Cane" (CBS Drama)
The Pitch: "Skin" with rum instead of porn? "Dexter" with sugar cane instead of serial murder?
Quick Response: "Cane" (which really should be re-re-named "Los Duques") is a Cuban-flavored repurposing of "The Godfather" and "King Lear" all mixed with a splash of rum. It looks and feels like a half-dozen different projects -- a little "Sopranos," a little "Skin," a little "Brothers & Sisters" -- but doesn't look or feel *exactly* like any of them. In addition for serving as a fantastic showcase for every employable Latino actor in Hollywood (if you're not in the pilot, wait a few episodes and you'll eventually get your chance), "Cane" is a showcase for a fantastic battle of goatees, a war in which Jimmy Smits will always be the winner. The middle-generational stuff, particularly the conflicts between Smits and Nestor Carbonell, is intriguing, though the older actors, particularly Rita Moreno, are initially wasted. Worse than that, though, is the fate of the attractive youngsters in the cast, who seem to be burning off plotlines that never got used on UPN's wisely cancelled "South Beach." The pilot has a specific look and rhythm and voice, all of which help mask the fact that the plotlines are straight out of a dozen primetime soaps and even more daytime serials. This isn't exactly in CBS' brand and it won't be the smoothest of pairings with the network's action-driven Tuesdays (it would have been far more at home in several ABC slots or on FOX), but this is a risk I don't mind the network taking.
Desire to Watch Again: Medium-to-Strong.
Possible Role For Eric Balfour: Oh you can totally imagine Balfour as a gringo whose relationship with one of the Duque girls causes no end of agita. I'd pay money to watch Jimmy Smits mock Balfour's facial hair. 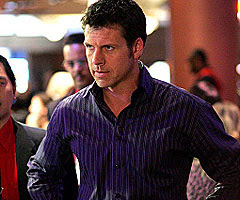 Show: "Viva Laughlin" (CBS musical-drama)
Pitch: We've figured out what was wrong with "Cop Rock" and we're ready to try again!
Quick Response: As I've said before, I wasn't a big fan of "Viva Blackpool" and the Americanized pilot follows that initial template fairly closely. Just as with "Blackpool," "Laughlin" doesn't immediately seem compelling enough as a murder mystery/family drama and so the musical numbers feel like they're the only thing keeping the show afloat. Those will be the exact things that cause the "60 Minutes" audience to go into coronary arrest the first time they forget to turn the TV off after Andy Rooney. This is a *horrible* piece of scheduling. I honestly don't think CBS could have found a worse time period and lead-in. But you know who those old viewers (and all viewers, in fact) are gonna love? Hugh Jackman. He's a guest star in the pilot and every time he's on-screen, it's like an entirely different (far more exciting) show. My understanding, though, is that his availability isn't likely to be great and the idea of whole episodes going by without him is a bit sad. That isn't to say that Lloyd Owen is a bad leading man, but he pales in the inevitable direct comparisons to both Jackman and to David Morrissey, star of the original. Melanie Griffith is also pretty good in what only promises to be a guest turn.
Desire to Watch Again: Strangely, medium-to-strong. I want to see where the American team will take it. I want to know how they're going to keep it fresh in episodes 13, 22 and 75.
Possible Role For Eric Balfour: Eric Winter, who I only vaguely remember from "Brothers & Sisters" two weeks ago, has the part that Balfour could have played. Can Balfour sing? We may never know.

Show: "Big Bang Theory" (CBS comedy)
The Pitch: "Weird Science" if the geeks lived next door to Kelly LeBrock and hadn't actually created her.
Quick Response: First off, Kaley Cuoco is no Kelly LeBrock, though she plays the one-note role of curvy-dumb-blonde with all of the subtlety it requires (which is to say none). The biggest problem with the pilot is that creators Chuck Lorre and Bill Prady have written a dumb comedy about smart people rather than a smart comedy about smart people. Every joke is telegraphed and they all have the exact same theme -- nerds can't talk to girls and they drink juice-boxes, but at least they're less pathetic than stupid people. The contempt with which the writers treat Cuoco's character (and anybody with a less-than-genius IQ) verges on offensive, at least compared to the pity and mockery of the nerds. The central device of the pilot -- hot new neighbor's shower is broken, so she has to use the geeks' shower -- is vintage '70s sitcom tripe. Oh and this is yet another CBS Monday comedy with as little diversity as possible. Is there a whiter two-hour block on TV than CBS' Monday comedies? I know she was doing "Football Wives," but tell me this same sitcom with the same premise wouldn't have automatically become better if Gabrielle Union had been cast in the female lead.
Desire to Watch Again: Low. And I say that as somebody who watched every episode of "The Class" simply because it was paired with "HIMYM." Yup. CBS cancelled "The Class" and actually found something *worse* to take its place.
Possible Role For Eric Balfour: Eric Balfour thinks Eric Balfour is too cool to play a Nerd.