MovieWatch: "Pirates of the Caribbean: At World's End" 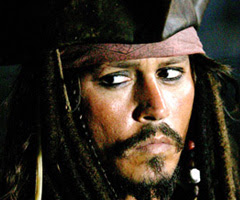 "Pirates of the Caribbean: At World's End"
Director: Gore Verbinski
Fien Print Rating (Out of 100): 32
One-Word Review: Prolonged
In a Nutshell: [This movie was so darned disheartening that I saw it on Friday, but couldn't bring myself to even write a blurb until today.]

"Pirates of the Caribbean: At World's End" is just a dreadful, charmless sham of a movie. Any residual good-faith for the franchise and its characters not drained by the second film is gone after a third film that somehow manages to run 168 minutes. That second movie, though abusively long itself, at least had moments of wit and some genuine technical innovations, while "At World's End" does little more than embellishing on the effects and creativity of "Dead Man's Chest," reducing the entire film to a tonal drone. Of somebody tells you "Oh, I loved Captain Jack in this movie," they're lying. They're remembering how much they loved him in the first movie and how much they liked him in the second. Despite several scenes in which multiple Captain Jacks appear on-screen at once (the best and most trippy moments of the movie), there's less Johnny Depp in the third movie, doubtlessly pushing the question of how a three-hour movie has so much less of the good stuff.

What "Pirates 3" has in spades is unnecessary complications. I defy *anybody* to tell me what occurred in the first hour of this movie, a ridiculous mishmash of double-crosses in which I think Keira Knightley's Elizabeth Swan finds herself on at least four different ships and Orlando Bloom's Will Turner goes from prisoner to sailor to pirate to prisoner with blinding pointlessness. The entire movie builds to an epic confrontation between the Black Pearl and the Flying Dutchman, a confrontation so glutted with CGI that despite stretching on for at least 30 minutes, I remember exactly one stunt -- Captain Jack and Davy Jones dueling atop a mast -- and I probably only remember that because it's in the trailer. The first and second movie made great show of the stunts and the choreography, of attempting to showcase the effort the actors put into learning their craft, while the third movie cares only about size and scale, with editing so manic that I don't rightly know what the actors were doing and what their CG doppelgangers were programmed to do.

A certain amount of viewership is rewarded by the appearance of Keith Richards, somewhere in the movie's middle. Giving any specifics would probably spoiler the cameo, which last less than five minutes, but yielded one of the two times I laughed the entire movie.

Some of the more positive reviews of this movie (and there are one or two) have raved that it's the darkest "Pirates" movie yes. Well duh. But who the hell wanted a *dark* movie based on a Disney theme park ride? Does this mean that in the sequel to "Disney's Country Bears," the Bears were going to eat the character played by Christopher Walken in the original and then have to suffer through the guilt for three hours? There's absolutely no substance or human depth to any of these "Pirates" movies, so the first one at least had the common sense to be an amusing lark, stuffed with wordplay and wit. Since then, it's been like the melancholy of "Weatherman" has permanently damaged Verbinski's sense of tone.

For heaven's sakes, the part I enjoyed most was an early scene with Depp's Captain Jack marooned in a great salt flat (The Locker) facing uncooperative doubles and pesky crabs. It also lasted at least twice the required time, but it caused "El Topo" flashbacks, which may or may not be what Gore Verbinski intended.

It's not even June yet and the summer's franchise films are getting increasingly poor. I'm seeing "Knocked Up" this week and I have high hopes.