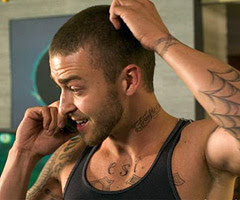 In the last 15 minutes of "Alpha Dog," the character played by Sharon Stone pops up in an entirely comical fat suit. The purpose of her, um, "shocking" appearance is to illustrate how the unfortunate events of the movie have changed this particular woman, but all I could do was marvel at how despite having let herself go to seed and gained 50-to-100 pounds, Stone's character had continued to get her teeth whitened and her nails done. The movie had already pretty well lost me by there, but I spent the last 10 minutes laughing at Fatty Sharon Stone, which couldn't possibly have been Nick Cassavetes' intention was.

Unfortunately, Cassavetes' general intentions are much too obvious -- He's making just the latest in an endless line of "The kids aren't alright" dramas, following in the footsteps of previous superior films like "River's Edge." There have been so many recent films in this genre -- think "Kids," "Elephant," "Thirteen," "Bully," "Chumscrubber" and "Mean Creak" -- that the fact that "Alpha Dog" is "based on a true story" becomes meaningless. Do I give "Alpha Dog" a qualitative bonus for factual accuracy, even though most of its plotpoints were covered identically and previously in movies both equally semi-true ("Bully") and fictional ("Chumscrubber")?

I don't, because if I did, I'd probably then get frustrated by how many moments in "Alpha Dog" feel so patently false, from the aforementioned fat suit to Ben Foster's mind-bogglingly hilarious kung-fu party showdown to the tawdry and exploitative swimming pool threesome to the badly green screened backdrop in a key final scene. "Alpha Dog" is much too artificial and screenwriter-contrived for a movie that wants to boast about its veracity and its unblinking depiction of youth culture. I'm also not sure if Cassavetes' goal is to indict faulty parenting or hip-hop culture for corrupting America's misdirected youth, but he probably couldn't tell you either. It's one thing for Cassavetes to say, as he has on many occasions, that he doesn't want to be pigeon-holed as just one specific kind of filmmaker, but all of the schizophrenic flitting he's done between "She's So Lovely" and "John Q" and "The Notebook" and this comes through in a lack of consistent vision.

The movie is a mis-edited muddle in large part because the camera can't find anybody it wants to settle on. That's not the same as Cassavetes offering viewers a character to identify with, though, because Anton Yelchin's Zack is supposed to be that character (and he isn't bad). But none of the ostensible leads -- Emile Hirsch or Justin Timberlake or Fernando Vargas or Shawn Hatosy -- has the necessary charisma to carry the picture. The movie's energy level rises or wanes based on Foster's screentime, as he makes every over-the-top twitch and spasm watchable. The women are reduced to dull caricatures, barely defined by their relationships to the various men. In lieu of a character, Olivia Wilde provides a little gratuitous nudity, as if it were something she needed to do to advance her career, never looking back. And eventually somebody will figure out a proper use for Amanda Seyfried, who probably should be a TV star by this point, at the very least.

I'd advise viewers to skip "Alpha Dog" and check out one of those earlier teens-gone-wild films, or just wait for the next one to come along.