NetflixWatch: "Because I Said So" 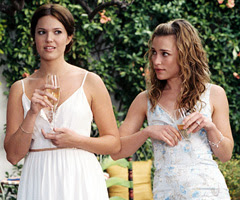 "Because I Said So"
Director: Michael Lehmann
Fien Print Rating (Out of 100): 24
In a Nutshell: If "Because I Said So" ends up being not quite the worst chick flick ever made, it's certainly not for want of trying. That I watched this DVD to review for work doesn't make my 100 minutes any less wasted. The script by Karen Leigh Hopkins and Jessie Nelson recycles a relentless string of genre cliches and Lehmann directs without an ounce of style. As a result, you're left with a movie in which actresses with as much natural charisma as Mandy Moore, Piper Perabo and Lauren Graham are routinely upstaged by elaborate wedding cakes and in which the only way Diane Keaton can avoid befalling the same fate is plunging face-first into said cakes.

"Because I Said So" comes out only a couple years after Diane Keaton earned an Oscar nomination for "Something's Got to Give," a movie that maintained an equal balance between revering and humiliating the "Annie Hall" legend. All reverence is gone in "Because I Said So," a movie that takes pleasure only in making her look ridiculous, regardless of the situation and regardless of the necessity. It's not just that the entire movie is predicated on a stupid thing Keaton's character does and that said complications would be eliminated if anybody in the movie were capable of a human and honest conversation, but it's the extent to which Keaton's character is presented as the most extreme of ancient fuddy-duddies. She can't handle her cell phone or her remote control and even though she has a computer hooked up to the Internet, she keeps landing on adult websites with loud sound effects. Even if part of the film's theme is that it's never too late to try to fall in love, Lehmann choreographs and shoots the budding romance between Keaton's character and her daughter's boyfriend's dad (Stephen Collins) like a nature channel documentary about sheep who have sex with horses.

In a romantic dilemma the writers present as if it's never been seen before, Mandy Moore's character (so clumsy! so incapable in love!) has to choose between -- get this! -- the soulful artist guy (Gabriel Macht) who's perfect for her and the rich, professional guy (Tom Everett Scott) who her mother wants her to be with. Even if we hadn't seen the exact same choice play out in dozens upon dozens of movies, it's made obvious by the end of their first date, a problem that the writers can't get around. Moore's character's inability to make the decision quickly, much less after sleeping with both men for some length of time, caused me to lose any sympathy (or empathy) for her. When you're rooting for a romantic-comedy to end unhappily, that's not a good sign and I'd bet that 99.8% of all men will view the characters the same way.

Last thought: Poor Lauren Graham. I completely salute her decision to move on from "Gilmore Girls," but the idea that films like this and roles like this fifth banana part might be all that's waiting for her out in the world makes me sad. I look on the landscape at roles for women of Graham's age and it's hard to see what her career path is supposed to be. Perhaps an indie film path in which she becomes a slightly softer Parker Posey? Otherwise, I feel like she's just going to be going for the same parts as Bonnie Hunt or Elizabeth Perkins, the barb-tongued sister, ex-girlfriend or long-suffering wife. Male screenwriters aren't good enough to write female roles more interesting than that and if "Because I Said So" is the best she can hope for from distaff scribes... Ugh.
Tweet