About that "Grey's Anatomy" spin-off 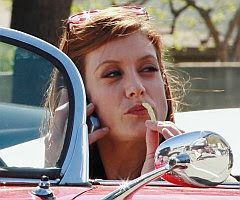 As everybody knows, "Grey's Anatomy" went into spin-off mode on Thursday (May 3) night, wedging the back-door pilot for "The Dr. Addison Montgomery Show" (tentatively titled "Private Practice," more amusingly titled in some circles "Montgomery's Ward") into an otherwise subpar "Grey's Anatomy" episode (the killing off of one guest star seemed almost inexcusably rushed).

Since ABC is almost certain to find a home for "Montgomery's Ward" somewhere in its fall schedule, it's worth glancing at what, exactly, the show appears to be.

In short: More of the same, only sunnier. If "Grey's Anatomy" is fundamentally about young doctors trying to balance their professional aspirations with their personal desires, "Montgomery's Ward" pushes the same agenda only to a slightly older age group (kudos to ABC, I guess, for aiming to raise its average viewership age). The characters here -- played by one recognizable TV veteran after another -- are already professionally successful in every way. But wouldn't you know it? Their personal lives are all in shambles. The women are great doctors, but they're in trouble as wives, mothers or girlfriends. The men are great doctors, but they aren't so good with their wives and girlfriends. Part of what keeps "Grey's" from getting too soapy is that the weekly cases are part of a work-based learning curve. I get the feeling that "Montgomery's Ward" wouldn't have as much learning, so more time could be spent on wacky clients and on a daisy chain of hook-ups. Whee.

The writers tried to make sure that you'd know you weren't watching a totally identical show by tossing in meta jokes about elevator fetishes and "Mc"-everything, but doesn't "Grey's Anatomy" already do that to itself?

I know myself too well to pretend that I won't watch, at least at first. I will. The cavalcade of familiar faces is nice and there's little doubt in my mind that Kate Walsh can carry her own show. She's equally capable with comedy and drama, she's easy on the eyes and we all know she can sell Shonda Rhimes and company's cutesy dialogue.

How much more of Shonda's mewlingly self-absorbed characters do viewers crave?

Lest this post get too long and take over the entire screen, more specific comments on the spin-off continue after the bump...

1)Taye Diggs is an attractive man and, if his work in "Rent" is to be trusted, not an untalented man. One thing that Taye Diggs isn't, however, is a TV star. He wasn't a star in "Kevin Hill" and he wasn't a star in "Daybreak" and he's not going to be a TV star here, even if some early ratings indicate that he is. Nothing is compelling about him and he seems to have a maximum of three facial expressions.

2)I don't know if Tim Daly has more than three facial expressions and he's gotten to the point where he delivers every single line (on-screen and off) with the exact same tone of withering scorn. That being said, whatever Diggs doesn't have, Daly certainly has. But that incredibly watchable quality Daly has, it hasn't prompted anybody to watch "Eyes" or "The Nine," both better shows that "Private Practice" will likely turn out to be. Rather than transplanting Addison to Santa Monica, is there any chance we can move Daly's character up to Seattle? He would have very little patience for the soapy doings at Seattle Grace and he'd probably be funny.

3) I'm fundamentally opposed to any show that thinks it's clever by having a slightly withdrawn and socially awkward shrink character named Violet. GET IT?!?!? SHRINKING VIOLET? Ugh. But I like Amy Brenneman just fine.

4)I also like Paul Adelstein, better known as Evil Agent Kellerman from "Prison Break." Now he'll be known as "that guy on the 'Grey's Anatomy' spin-off who likes picking up skanky young women on the Internet." But to those of us who follow such things, he'll always be the guy who was supposed to play Dr. Burke on "Grey's Anatomy." So I spent a good part of the two hours wondering how all of our lives would be different in Isaiah Washington had never been on "Grey's."

5) Actually, there are too many people in "Montgomery's Ward" who I already like. There's almost no potential for discovery. While there were many of the "Grey's" leads were recognizable (P-Demps, Katherine Heigl, Sandra Oh), the show was built around a leading lady who very few people knew and several of its other breakouts (your T.R. Knights and Chandra Wilsons) were similarly obscure. The reason why it was a breakout cast was because they had somewhere to break out from. The cast of "Montgomery's Ward" is already out and that's no fun. Shonda and company, though, must feel like they've found their Ellen Pompeo in...

6) PIZ?!?!?!? Chris Lowell is a perfectly likeable seeming guy and since nobody watches "Veronica Mars" and nobody watched "life as we know it" he's an unknown to most "Grey's Anatomy" viewers. But I'm just not prepared to buy Stosh Piznarski: Super Stud, no matter how diligently he seems to have been performing his abdominal crunches. As my co-worked Hanh observed this morning, it's obvious that if Piz wanted to hook up with Veronica, he should have just whipped off his shirt and flexed in the season's first episode.

7) The cast was so glutted with recognizable faces on Thursday that it was finally painfully meta. All of the stars of "Mongomery's Ward" were guest-starring on "Grey's Anatomy," but the guest stars on "Mongomery's Ward" included former "Everwood" regular Stephanie Niznik, former "Alias" baddie David Anders and was that "Joan of Arcadia" regular Becky Wahlstrom? Too much!

8) What vintage "L.A. Law" repeat did they steal all of those Los Angeles establishing shots from? Did they not have a big enough budget to do better second unit work? Did they think that viewers wouldn't recognize that the show had a slightly different (i.e. warmer) color scheme? Did they think that a few weird shots of Tim Daly and Taye Diggs walking a dog on the cliffs overlooking the beach wouldn't sell the new locations?

9)I was comfortable with the idea that Addison is vaguely insane and that she was actually hearing voices in the elevator. The revelation that it was just Tilly the Security Guard didn't improve matters.