Take Me To The Pilots '07: FOX Comedies 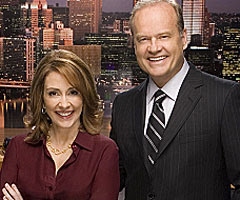 [All of my pilots clearly say "Not for Review" and I'd like to, as always, make it clear that I don't consider these to be reviews. They're first impressions of pilots that are likely to change in ways that may be minor or major over the next four months. The pilot that stars Kelsey Grammer and Patricia Heaton today could feature Tom Arnold and Paula Marshall by September. Sure, it probably won't, but "What if?"]

[Author's Note: I keep trying to find work for Eric Balfour, but so far he hasn't shown me any appreciation. Then again, Method and Redman haven't thanked me yet for trying to get "Method & Red" released on DVD. It's a thankless job.]

And, as always, go check out Sepinwall's completely identical reviews of these pilots. It's like a mentalist act and he always guesses that what I'm holding behind my back is a spoon.

Click through for a first glance at "Back to You," "The Return of Jezebel James" and "Rules for Starting Over."

Show: "Back to You" (FOX comedy)
The Pitch: If you have Kelsey Grammer and Patricia Heaton, you don't need a pitch.
First Impression: Every season, there's at least one sitcom that makes critics sit up and say "This show sucks, but the talent involved is good enough to sell slop!" Shows in this category have included "Happy Family" (with John Larroquette and Christine Baranski), "Out of Practice" (with half the known comic universe) and last season "20 Good Years." I'm pleased to say that "Back to You" is better than any of those shows, but once again it's hard to know if the material is any good, or if Kelsey Grammer, Patricia Heaton and Fred Willard are just so good that they can make anything funny. The pilot isn't even vaguely involving, but Grammer and Heaton show the ability to spar well. I also have to note that Ty Burrell (late of "Out of Practice") also gets laughs. Less funny are the husky, sweaty, young news director (Josh Gad, suggesting Miles Silverberg with a glandular problem) and Ayda Field's faux-Latina weathergirl. Also, the pilot rips off a key plot point from, of all sources, "October Road." Yes, I know the script was probably written before the ABC man-soap, but you don't want people saying "Dude, you stole that from 'October Road,'" so I'd recommend a reshoot. Oh, and what's the the rise in popularity of the name Chuck? That's Kelsey Grammer's name here. Josh Schwartz has Chucks in both of his two new shows. Adam Sandler's awful-looking gay marriage comedy is "I Now Pronounce You Chuck and Larry" Dane Cook has a new movie called "Good Luck Chuck," which co-stars Jessica Alba, but which I plan to ignore because, as I may have mentioned, it stars Dane Cook.
Desire to Watch Again: Moderate. There was some early recasting and rewriting, so I'll check to see how things settle.
Possible Role For Eric Balfour: Balfour wouldn't be funny as the in-over-his-head news director. And that might be funny. 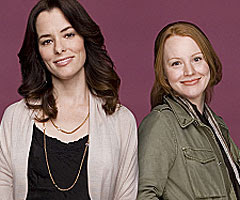 Show: "The Return of Jezebel James" (FOX comedy)
The Pitch: "Gilmore Girls" only they're estranged sisters and there's a laff-track.
First Impressions: That laff-track is a problem, at least at first. We aren't accustomed to Amy Sherman-Palladino's dialogue requiring audience approval and it's jarring to hear laugh-breaks programmed into the writing. Also, we always said that Lauren Graham was central to how appealing Lorelai Gilmore was and that with a less winning actress, the role might come across as slightly annoying. And it's true that Parker Posey is initially prickly in a way that Graham never was. I found myself laughing, though, and being impressed with the speed and intelligence of Sherman-Palladino's dialogue, mostly unblunted by the multi-camera sitcom format. Lauren Ambrose and Posey are a great pairing with the material, but after "Gilmore Girls" spending only 22 minutes with Sherman-Palladino's characters feels insufficient. The male characters aren't well-defined, but for now they don't need to be, I guess.
Desire to Watch Again: As uneven as this pilot may be, I still want to see more.
Possible Role For Eric Balfour: I'm sure that Balfour could be a perfectly fine annoying assistant, though I don't usually think of him as being a gifted reader of dialogue. 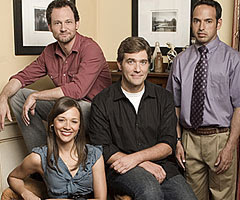 Show: "The Rules For Starting Over" (FOX comedy)
The Pitch: "Friends" if they were all as whiny and post-divorce as Ross.
First Impression: Before the credits even roll, a monkey attempts to rape Craig Bierko. And, despite cameos by Paul Pierce, Ryan Gomes and Johnny Knoxville, the attempted violation-by-simian is the pilot's comic highlight, unless you like equally low-brow jokes about hookers, 40-something women and sloppy seconds. Bierko isn't an actor on whom I wish bad things, but bad things keep being done to his career. And what did Rashida Jones do to deserve this? She was fantastic on "The Office," nearly making some viewers forget that Jim belongs with Pam, but this is the kind of work she used to get *before* she did "The Office." This is such a step backwards in quality for this fine actress that she might just as well be married to a fat guy in a CBS comedy. Co-stars Shaun Majumder and Johnny Sneed are even less funny than the two leads. If FOX wanted a low-brow live action sitcom, bringing back "The Winner" would have been a slightly better idea. The sad thing is that this show isn't even going for the demographic that FOX likes.
Desire to Watch Again: None.
Possible Role For Eric Balfour: At 30 himself, Balfour is probably too young for this show's brand of humiliation.