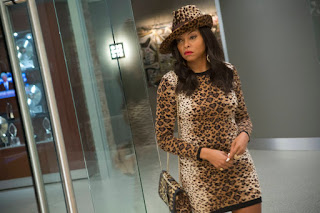 Thank you to the TV Academy for holding off on nominations until 8:30 this morning, rather than doing the normal stupid thing and announcing at 5:30 a.m. PT.

That means that I'm still chewing over this year's nominations, but predictably they got a lot right and a lot wrong and that's just how these things go.

*** Everybody's happy for Tatiana Maslany this morning and darn well we should be. I wish she'd gotten the nominations she deserved before the show began to bore me to tears. I'll eventually finish this season, but I'm sure I would have had a bit more excitement last year or the year before.

*** On the other hand -- and really there's almost no point in quibbling, given how outstanding much of the diverse representation is: Kerry Washington fell out of the field, Terrence Howard didn't make the cut, "Fresh Off The Boat" was shut out and, other than Aduba (And a random Pablo Schreiber nomination), the "Orange Is The New Black" supporting cast was shut out.

*** "Orange," in fact, received only four nominations thanks to the utterly BS Emmy decision to reject its appeal to submit as a comedy. Lorraine Toussaint was surely deserving of a nomination, as were Kate Mulgrew, Samira Wiley, Danielle Brooks and Barbara Rosenblat at the VERY least.

*** Back to diversity (and also snubbed favorites), it's very sad to see Gina Rodriguez shut out. It's not shocking, because Golden Globes wins mean nothing, but it's disappointing. She really deserved it. Oddly, with two nominations, it was still a better-than-usual Emmy morning for The CW, including a glorious nod for Anthony Mendez of "Jane the Virgin" as Outstanding Narrator and a fine Visual Effects nod for "The Flash."

*** "The Americans" received a writing nomination, which was well-earned, and also a nomination for guest actress Margo Martindale, which is completely and totally ridiculous. She was shoe-horned into a late-season episode and did absolutely nothing to warrant an Emmy nomination. I love Margo Martindale and will consistently sing her praises to the heavens, but that's a stupid nomination. Margo Martindale was nominated, but Lois Smith wasn't. Think about that, "Americans" fans.

*** The "Better Call Saul" Drama Series nomination was a pleasant surprise. I figured Bob Odenkirk and Jonathan Banks were locks, but that anything else would be gravy. Interesting to see Gordon Smith nominated for writing the "Five-0" episode, rather than Vince Gilligan and Peter Gould earning nods. Also, no directing or cinematography nominations? Boo.

*** Remembering that "Hannibal" wasn't eligible for anything this year, it's pretty gratuitous that if there were seven drama cinematography nominees that "Game of Thrones" earned four of them. Nothing for "Mad Men"? Nothing for "The Americans"? Nothing for "Peter Andrews" for "The Knick"? And don't get me started on stuff like "Rectify" or "The Leftovers." ["Mad Men" DP Christopher Manley was nominated for "The Secret Life of Marilyn Monroe." But Kelli Garner should have been nominated as well.]

*** I'm disappointed Cliff Martinez didn't get a score nomination, but Steven Soderbergh's nod for directing the "Knick" pilot is a good one.

*** "The Jinx" received six nominations, including a nod in the Outstanding Documentary or Nonfiction Series category, which was the best it could hope for. Andrew Jarecki is nominated for directing in the category along with four other HBO directors, including Emmy Nominated Director Dave Grohl, going against Brett Morgen for directing a movie about Grohl's former bandmate. "The Jinx" also nominated for cinematography and editing.

*** A great and well-deserved Lead Actor in a Comedy nod for Will Forte for "Last Man on Earth" and also a savvy nod for Forte's script for the pilot and, perhaps best of all, Phil Lord and Christopher Miller received nods for directing the pilot.

*** Once again, "Arrow" is shut out in the Stunt Coordination category, which is silly, but perhaps not as silly as "Daredevil" getting left out there. It's even odder, because "Daredevil" actually received a slew of technical nominations, including Main Title Design, Sound Editing and Visual Effects in a Supporting Role.

*** Oh and "Mad Men" earned 11 nominations for its final season, which is either a lot or a little, depending on your perspective. Yay for Jon Hamm and Elisabeth Moss and Christina Hendricks and the two Matthew Weiner writing nominations. But no directing nods, no nominations for Vincent Kartheiser and a number of other folks getting their last shots. Also watch: Jon Hamm is going to win his first acting Emmy for "Kimmy Schmidt," leaving "Mad Men" acting Emmy-free. [Speaking of "Kimmy Schmidt," the lack of nomination for Ellie Kemper is sure a surprise.]

*** Speaking of Jon Hamm as a double-acting nominee, also kudos to Allison Janney and Gaby Hoffmann, who received exactly the double recognition both deserved.

*** You take miniseries productions out of the TV Movie field and what you're left with is nominations for... "Grace of Monaco." Voters did not, however, feel the need to recognize Nicole Kidman for her much-mocked Cannes-opening disaster.

*** Sorry, Eva Green. But "Penny Dreadful" was nominated for makeup and for music. I'd have added cinematography and production design, probably.

*** Good for Ben Mendelsohn, who I had figured as the "Bloodline" breakout after watching one episode. I'd compare his nomination here to Margo Martindale's nod/win for "Justified," in that it's a relief when Emmy voters can see past "shiny and new" and recognize a great performance from a veteran character actor.

*** Comedy Central is clearly building momentum here. Amy Schumer had a slew of breakout nominations as both Lead Actress in a comedy and also for her show. "Key & Peele" had some breakout nominations, including Keegan Michael-Key's individual nod. But no love for "Broad City." That's too bad.

*** It's also interesting that Netflix was able to get at least a few nominations for nearly everything, but "BoJack Horseman" couldn't break into any of the animated fields. Maybe next year? Dunno.

*** Remember last year when "The Good Wife" was everybody's plucky network underdog? The drama that demonstrated that you can do over 22 episodes what the cable shows do in eight or 10 or 13? It didn't get the Drama Series nod last year, but Julianna Margulies won for Lead Actress in a Drama. This year? Four nominations, led by a default nomination for Christine Baranski. Margulies? Shut out. If you like, you can just read this as Emmy voters noticing the huge drop in quality for the most recent season. But I still want to view Margulies' snubbing and the snubbing for the visual effects department as a criticism of the way the show handled AliciaKalindaGate...

Check back, because this sucker may just keep getting updated...
Tweet

Posted by Daniel Fienberg at 10:23 AM