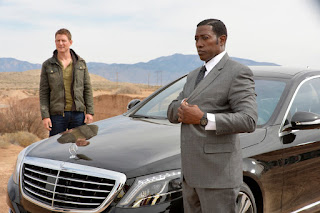 Show: "The Player" (NBC)
The Pitch: "It's 'Las Vegas' meets 'The Game' meets 'Minority Report.'"
Quick Response: A few years ago, NBC had a show about a security expert with a military background who helped fight the particularly opulent crimes in Sin City with the help of a gruff older guy and a saucy Brit, among others. That series, "Las Vegas," lasted five reasonably successful seasons and let Josh Duhamel make bad rom-coms with Katherine Heigl, who later got an NBC show of her own. So why not return to that trough with Philip Winchester a more rugged proxy for Duhamel, Wesley Snipes a suaver replacement for James Caan and Charity Wakefield trying to out-posh Marsha Thomason? While "Las Vegas" was fairly low-stakes, creator John Rogers' has given "The Player" a vein of darkness with Winchester's Alex Kane trying to resist backsliding into a blood-thirsty past, while also seeking some well-deserved vengeance. But "Leverage" vet Rogers is more comfortable with the light and somewhat silly broader structure that involves statistics-based crime prediction, future-tech, gambling and everybody calling each other by funny names. It's an odd and not always effective blend, because you have Winchester ditching his "Strike Back" playfulness -- certainly the best thing to ever happen to Winchester's career -- to interpret his character as a self-denying sociopath, while Snipes and Wakefield are both having fun with their roles in the high concept bigger conceit. To work, "The Player" will likely have to decide whether Winchester's tone is the one it's going for or whether it's being steered by Snipes and Wakefield. The latter tone is goofier and tips back to that "Las Vegas" fizz, while the former tone is something more like "Blacklist," which I guess might still allow Snipes to play a version of Red Reddington. That would be fine, because Rogers and company understand a lot of things that Snipes does well as an actor and they let him exhibit dapper menace, close-quarters badassery, macho humor and some character work. Wakefield is pretty, peppy, British and wields The Most Powerful Tablet in the World. And Winchester looks comfortable doing stunts, which probably makes director Bharat Nalluri happy, since the "Hustle" and "Spooks" vet enjoys a good stunt.
Desire To Watch Again: I am a Wesley Snipes fan from way back and I'll support him in this, even if the show is more nimble about utilizing him than figuring out what it wants to be overall. Hopefully my Snipes-based interest will keep me with "The Player" in case it evolves into its own distinctive thing, not just another Vegas crime-fighting show with a slightly silly pre-cog twist. [Note that "The Player" at least sent us a full pilot, giving it an early advantage over "Minority Report," which is going through a lot of retooling.]

Posted by Daniel Fienberg at 9:30 AM

Labels: Take Me To The Pilots, The Player