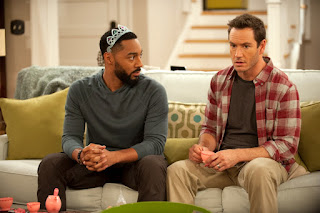 Show: "People Are Talking" (NBC)
The Pitch: "All in the Family: Couple's Edition"
Quick Response: I can tell that there are conversations that creator DJ Nash wants to have here that are, if not revolutionary, at least interesting. The premise is that Russell (Tone Bell) & Angie (Bresha Webb) and Mitch (Mark-Paul Gosselaar) & Tracy (Vanessa Lachey, eventually, but Meaghan Rath in the original pilot sent to critics) are couples who like to have Big & Edgy Conversations about race and religion and gender and relationships and that they mean well, even if they don't always know the right things to say or the right way to say them. Nothing in the pilot feels like "People Are Talking" is giving the edge of the envelope a gigantic push, but the desire to show conversations people might really have is in earnest and I credit it for that, even if the pilot has to be inevitably bland and dated in its targets. To get a more hearty endorsement, "People Are Talking" would have to be actually funny, which it isn't. The ability to be "funny" gets lost between "Aren't we outrageous!" and "But we're not actually racist/sexist/whatever, so please don't worry!" It's like if every time Archie Bunker said something awful, he quickly turned to Meathead and said, "No, but seriously what would African-Americans prefer I call them?" and Gloria turned to the camera and said, "My dad's just doing the best he can!" It's neither politically correct, nor butting against notions of political correctness. It's just genial button-pushing, which doesn't go far, but with a big assist from the cast, it could have potential if it advances FAST. Tone Bell was the best part of NBC's "Bad Judge" and he's the best thing here, though he has all of the lines you can tell Nash is proudest to have written, which is both a good and a bad thing. Bell has good rapport with Bresha Webb, the cast member I know least. Mark-Paul Gosselaar seems to be having fun playing a nerdy and sheepish guy, relishing simultaneously looking like Zack Morris, but having other characters pretend he doesn't. I'm sad to see Rath go, because she brings a brightness to comedies, a charm and liveliness that isn't the same as simply being beautiful, as the show may well learn when Lachey takes over. The show is determined to concentrate on its four characters in different pairings and permutations, but when it comes to the pilot, that means a lot of expositional dialogue rather than showing things, so Mitch tells Russell "Are you really upset about this, or is this a bit for your stand-up?" and Russell tells Mitch, "Professor, you're not teaching your ethics class right now" and somebody thinks that's better writing than showing Russell do stand-up or Mitch in the classroom. I disagree, but maybe we'll move past that in Episode 2.
Desire To Watch Again: Vanessa Lachey has displayed hints of being comedically game in the past and I definitely will watch a revised pilot, plus an episode or two to see if "People Are Talking" becomes fresher and sharper and, most importantly, funnier outside of the partially excusable embalmed pilot structure. A show can mean well, but if it doesn't do comedy better than this, I won't stick around.

Posted by Daniel Fienberg at 1:02 PM

Labels: People Are Talking, Take Me To The Pilots