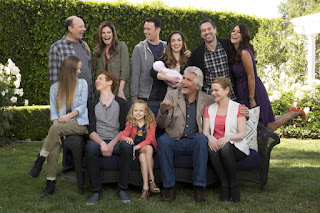 Show: "Life in Pieces" (CBS)
The Pitch: "Mo' Modern Familyhood"
Quick Response: "Life in Pieces" is weirdly proud of doing what family sitcoms have been doing... forever. The subhead boasts "One big family. Four short stories. Every week." So... You mean it's a family sitcom with an A-story a B-story a C-story and a D-story? How revolutionary. I guess the hook is that the stories are told individually and then maybe they come together in a fourth concluding story? It's hard to tell, because the pilot for "Life in Pieces," directed by Jason Winer as if you didn't have enough reasons for "Modern Family" comparisons, actually struggles to gel the storylines in a meaningful narrative or thematic way and also has no connection to early loglines for the show, which mentioned using different perspectives within the family to tell single stories. "Life in Pieces" has all of these fancy ideas about what it is or isn't, which blur the line pointing to what it actually appears to be: A comedy pilot with perhaps the best cast of any new show this season and a couple decent laughs and at least the pretense of some underlying family drama. I'd honestly scrap whatever structural innovation the show is pretending to have in order to concentrate on what would probably be the "best self" for "Life in Pieces," which is a half-hour version of "Parenthood" -- you've even got Dianne Wiest, for heaven's sake, if you want continuity to the movie -- with the balance shifted to laughs. Nobody associated with "Life in Pieces" would want to admit it, but you have Wiest and James Brolin standing in for Zeek and Camille Braverman, Dan Bakkedahl and Betsy Brandt in for Adam and Kristina, Colin Hanks and Zoe Lister-Jones as proxies for Julia and Joel (this is the flimsiest comparison) and Thomas Sadowski and Angelique Cabral as the Crosby and Jasmine. It's almost eerie when you step back. "Life in Pieces" is, in fact, like so many familiar shows and features so many actors that you probably like already that you can slide into the pilot with amazing comfort and you don't require any getting-to-know-you exposition, which is a tremendous relief. And none of the actors is being asked to stretch tremendously -- Betsy Brandt playing light may surprise you if you missed "The Michael J. Fox Show" and Dan Bakkedahl playing less of a sad-sack than usual is also nice -- so it's even easier to just sign on for this as a family. "Life in Pieces" doesn't feel much like a CBS sitcom, both because of the single-cam trappings and because of a certain coarseness that particularly rears its head in the Hanks/Lister-Jones story and maybe because this isn't what CBS does normally, nobody in development was able to tighten the punchlines to get a couple more laughs. And for reasons of style and tone, it's going to be a bad match with "The Big Bang Theory," even if CBS wants to use its multi-cam hit to encourage people to watch "Life in Pieces." But if this were airing in ABC's Wednesday comedy lineup, it would feel like another promising family half-hour. So I guess my non-review bottom line here is, "The allegedly innovative structure is either a total MacGuffin or just poorly deployed, but otherwise, this feels less like a pilot and more like an middle-of-the-road episode of a long-running series that I mostly enjoy with a cast that I mostly love." That implies that there are better episodes ahead for "Life in Pieces."
Desire To Watch Again: Reasonable. Why not? I'll watch to see if the structure has any ongoing purpose. Mostly, I'll watch for the cast. There's a really good comedy here... in pieces. It's just OK for now. Let's see if it comes together down the road.

Posted by Daniel Fienberg at 1:15 PM

Labels: Life in Pieces, Take Me To The Pilots