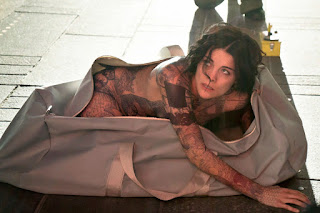 Show: "Blindspot" (NBC)
The Pitch: "Jane Bourne" "Prison Break without the Prison" "Amnesia Chuck"
Quick Response: This is either an insult or praise: I'm not sure I've ever seen a pilot as uninterested in character, at least on a traditional expositional level, as "Blindspot." This could be intentional because the writers want to lead with plot and mystery and not muddy the waters? It may be intentional because the main character has no memories/past/characteristics and therefore it was decided to restrict the other characters to job title and "doggedly determined" for the pilot. So for Sullivan Stapleton's FBI Agent Kurt Weller, all of the normal shorthand character details that you'd normally expect -- A picture of a dead wife, a reference to Afghanistan, etc -- are absent. I can't even tell you where Weller is from, because while Stapleton does many things well -- he aces "concerned authority" -- American accents are something he does comically poorly and while he *may* be trying a Southern accent, my certainty on that front wavered with every line of dialogue. I'm assuming the characteristic sparsity was intentional because "Blindspot" creator Martin Gero did character well on "LA Complex," though he also did humor well and that's absent here. Gero and director Mark Pellington are mostly invested in several tiers of nicely shot sleight-of-hand in the pilot. You've got the "Let's spend as much time as possible circling Jaimie Alexander's tattoo-covered naked body without, you know, showing her naked body because we're on NBC" sleight-of-hand and then you've got the, "Let's make things go by so quickly, narratively, that you never stop and ponder under what circumstances any of this would make sense either as efficient gameplay for a criminal mastermind or... anything." Because there's no way to apply even an iota of logic to "Blindspot" and expect to be rewarded. It's all, "Wouldn't this be a wacky thing to occur?" and then, "Oh look, Jaimie Alexander naked and Sullivan Stapleton squinting!" A couple times, I got bogged down in thought and pondered the shell game that the creators were playing. I got distracted by the pilot's puzzle-of-the-week, which wasn't especially creative and featured some stunts/confrontations that were more silly and less inspired than an idea this tenuous should have for Week 1. I also got really distracted by the "twist" ending, which seemed to me to violate the show's sense of perspective and its dissemination of information. So rather than leaving me with interest piqued, "Blindspot" left me saying, "Stop cheating!" But I was never bored.
Desire To Watch Again: Stupid accent aside, I like Stapleton. I think Alexander is doing as much as she can, given that you feel uncomfortable for her for every second of the pilot. Rob Brown and Marianne Jean-Baptiste head up a decent ensemble. So I'll watch a few more episodes, but disbelief will be harder to suspend with every second, since the pilot doesn't even offer worthwhile hints on the big "Who would do this?" and "WHY?!?!?" answers.

Posted by Daniel Fienberg at 12:50 PM

Labels: Blindspot, Take Me To The Pilots