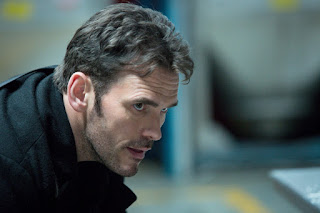 When FOX's "Wayward Pines" premiered in May, I was positive, albeit with some tempering.

Through six of the event series' 10 episodes, I felt like showrunner Chad Hodge and company had pretty successfully improved upon Blake Crouch's thin-as-a-literary pancake book trilogy, adding some extra layers to the source material and visualizing the tricky world nicely.

The first five episodes were basically Crouch's first book and I thought the way the series handled the improbable twist reveal was perhaps the biggest improvement of all, building a multi-tiered mystery out of Ben and Ethan's near-simultaneous discovery, as well as Theresa's increasing inquisitiveness. I also liked the heavily expositional sixth episode, which was driven by great flashback work.

At the time, I thought "Wayward Pines" was a fun summer thriller with the potential to be something more than that if it found a way to resolve itself that was more satisfactory than Crouch's two-books-of-filler approach.

Thursday (July 23) marked the finale either for the first season of "Wayward Pines" or, more likely, for the one-and-done event series it was always announced as.

And the final judgement?

Well, I'm not going to abandon the warmth I had for the first half of the season. Rewatching the fifth episode, strongly directed by James Foley, with an enthusiastic ATX Television Festival crowd was a true pleasure, as was moderating the subsequent panel with Hodge and Carla Gugino.

But when it comes to the last four episodes? I guess I just felt the limitations of the 10-episode format very strongly. Thursday's finale suffered from too many half-developed characters becoming too central, too many non-characters being eaten by mutants and a really inappropriately and accidentally hilarious moment that instigated a closing twist that was evocative and lived up to the finale title of "Cycle," but probably didn't make a damn bit of sense.

Some things that might have worked had they been given more time to breathe:

1) Last week's episode probably shouldn't have introduced Hassler's journey into the outside world. Probably they needed to bring Hassler back as a concept because he played a role in putting Ethan and Theresa in Wayward Pines in the first place, but he played less of a role here than he did in Crouch's books and he probably could have been ignored entirely and nobody would have missed him. But once they showed his video from San Francisco, I was left messing the only part of the last two books that I really enjoyed, specifically Hassler's Beard Grylls-style survivalist quest to evade abbies and the elements and return to Wayward Pines, to the woman he loved and who had loved him. That stuff was going to be almost impossible to film, since it required lots of outdoor photography, lots of abbies and it would have put a lot of physical pressure on actor Tim Griffin, who might night have been willing to get as emaciated as he would have had to be to justify the plotline. So I wish it had been there, but I perhaps wish even more that it hadn't been mentioned at all if this was all they were going to do.

2) The transition of Melissa Leo's Pam from her book incarnation to the TV show version was probably Hodge and company's biggest change. In the books, Pam is vicious, vengeful and virtually unkillable. She's Nurse Ratched meets The Terminator. She's exactly what Leo was playing with such relish in the first five episodes. But then there was a decision made to reveal that Pam was not only David Pilcher's sister, but perhaps the truest believer in the nobility of the Wayward Pines cause. By the end, Pam is the TV series' heroine, along with Carla Gugino's Kate. And I just couldn't buy it. Maybe my problem was based on Book Pam and how similar she was initially to TV Pam, but simply saying that David Pilcher believed in Ethan and Pam didn't doesn't justify the way the show portrayed Pam in its first half and there was no room to get to where she needed to be when she and Kate agree to try again with Wayward Pines, doing things the correct way this time. But then...

3) Somewhere between Pam and Kate making their pact and "Three Years Later..." the First Generation took over, put the adults back in hibernation and began to run Wayward Pines, viewing David Pilcher as a hero, rather than as a maniac willing to sacrifice an entire group of adults to hungry, hungry abbies. The First Generation was another of Hodge and company's big ideas and it's one that I liked, even if I had some belief difficulties. I kinda get why you might want the town to operate Business as Usual with adults running things, while educating and preparing young people and arming them with the truth, but we were denied any sense of what the transitional process was supposed to look like. We were denied any sense of what the current educational process was like for the First Generation. We were, sadly, denied any sense of who any of the First Generation-ers were as characters, other than that the lead malcontent was Jason and that, in the future at the end of the show, he was sheriff. Because there was no time for individuals to clarify from amidst the First Generation blur, there was no way to really tell if last week's revolt was organic in any way or how things progressed through this week's episode. We had only a limited sense of how many First Generation members were following Jason's lead, what made them different or what happened to those with reservations. As the first season ends, the Bad Guys win, but I don't know who they are, so I can't get worked up about it.

4) And speaking of the need to have three or four more fleshed out First Generation characters, the show needed another five or six characters of sympathetic value both in Wayward Pines and in The Ark. When it comes to Wayward Pines, this was the fatal flaw of the third book as well. Ethan tells the residents the truth. Pilcher shuts down the electricity. The abbies invade. And at that point, Crouch has to panic and add details about a few characters before killing them off in the massacre. It's shoddy writing. "Oh look, it's a blind old lady who's kind to an abbie. SHE'S LUNCH." "Oh look, there was a gay couple. THEY'RE DINNER." But the TV show didn't do any better, even after improving the depictions of a number of non-Ethan characters. When the abbies tear through the town, they're still ripping out the throats of total non-entities. The TV show actually did a worse job when it came to the guards and scientists and whatnot in The Ark. Thanks to a plotline involving the murder of Pilcher's daughter, a few Ark residents have characters in the book, but don't factor into the show at all.

I don't know if any of those expansions would have been Hodge's priorities if he'd been given another three or five episodes, but they would have helped. There were never enough people in Wayward Pines and the people there were, we didn't get to know enough of them well. Instead, we invested briefly in guest stars who were then killed off. We invested in Juliette Lewis' Beverly, in Terrence Howard's Sheriff Pope, in Justin Kirk's Peter. I guess maybe I liked Siobhan Fallon Hogan's Arlene enough that when she's spared, that was good. And if faith led Hope Davis' Megan Fisher to get mauled by a sea of abbies, that was appropriate. But who cared if Mayor Fisher lived or died. LIAR. You did not.

So the TV series built to Ethan heroically sacrificing himself for a bunch of people he had no reason to care about and we had no reason to care about. It was more about Oscar Nominee Matt Dillon announcing, "I signed on for 10 hours and that's all I'm gonna do... BOOM!" than anything else. We're supposed to accept that his action is conclusive and effective and that he got rid of every single abbie who made it past the fence and therefore everybody is safe. Because otherwise, his leadership really might be more useful than the few dozen abbies he blew up. There were thousands of them. But... good for him. Nice gesture. Way to go, Ethan.

That set up the unintentional hilarity of Ben getting whacked in the noggin by a piece of CGI debris while he was in the process of wailing for his martyred father. "Daaaaaaad! *Thud*"

Because Ben was hit in the head with CGI debris, that's the excuse for the time jump as, in a callback to the premiere, a nurse is trying to wake up "Mr. Burke" and that nurse is... Amy. She explains that he's been under for three years and that's supposed to explain not only how she became a nurse, but also how the First Generation was able to forcibly take over and gain enough technical proficiency to put the grown-ups in silica/graphite/carbonite and begin to run the town, with a newfound reverence for David Pilcher and the triumphant return of Reckonings for people who try to leave.

The closing images of Ben staggering out of the hospital and witnessing this brave new world are evocative, because they call back the similar images of Ethan doing the same thing in the pilot, but... They don't make very much sense.

If The Powers That Be don't trust Ben, why bother bringing him out of suspension at all? What's to be gained? What power of convincing does Amy have? And why hasn't she moved on from the milquetoast guy she didn't get around to having sex with after they'd known each other for a week three years earlier?

Actually, there are a lot of ruses that Ben seems to be witnessing that are still in place even though everybody alive presumably knows the secrets of Wayward Pines. What's up with that?

And why didn't being Sheriff make *Ethan* have a fetishistic enjoyment of ice cream?

Also, I'm not sure that the best way to convince audiences to clamor for a second season is by promising "Lots more Ben." It's a similar misinterpretation of audience interest that will soon bring us a second season of "Secrets and Lies" that's all about the Juliette Lewis character, a detective who walks around with a curled nose and pursed lips, like she solves crimes by smelling farts and sucking lemons.

So I'll walk away from "Wayward Pines" still thinking it was an entertaining enough summer potboiler, but with "UnReal," "Halt and Catch Fire," "Mr. Robot," "Hannibal" and various other superior summer offerings still going, is "entertaining enough" actually enough?

Posted by Daniel Fienberg at 11:45 PM