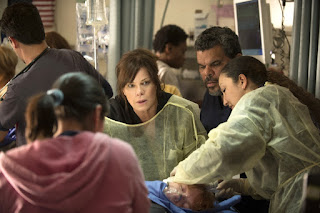 Show: "Code Black" (CBS)
The Pitch: "Los Angeles Med" or "LA-ER"
Quick Response: I could probably just file "Code Black" under "Sturdy medical dramas that will fill a gaping TV hole for some, but won't be necessary for me," but that would require that I have a needlessly complicated filing system, which I don't. Well directed by David Semel, the "Code Black" pilot has a distinctive look, almost as if it were shot through a chartreuse filter with light oversaturated throughout, and captures the chaos of an emergency room nicely, even if the sort of aesthetic genre reinvention of the "E.R." pilot isn't in the cards. Creator Michael Seitzman is also invested in the chaos, crafting an ER in which it's endlessly repeated that every second is the difference between life and death, but every doctor can spare a minute to pontificate on matters of curative decorum, or to provide a key piece of expositional biographical detail. Like there are a lot of walk-and-talk moments in this pilot, but there may be nearly as many inappropriate-pause-and-talk moments, when all that viewers are likely to want after the pilot are scenes of Luis Guzman's senior nurse leading ER tours and sequences in which Marcia Gay Harden and Raza Jaffrey's docs bicker about medical ethics. The first-year residents all get a character detail or two and none of them feel like anything more than window dressing after the first episode. The hook of "Code Black" is to be spending time in a Los Angeles area emergency room at its moments of greatest intensity, but the scenes likely to have the greatest impact are when it cheats. The key action set piece involves a surgery performed in the midst of freeway traffic that feels like it was yanked from a different show. And the episode ends with a piece of emotional pandering that's simultaneously excruciating in its contrived mawkishness, but also probably has a blunt force effectiveness that will leave many viewers sobbing. Look, there's an audience that craves the sort of medical drama in which people say things like "Life is measured here in split seconds. Hesitate and people die." over and over again, but perhaps also the sort of medical drama that isn't necessarily about which pretty doctors are sleeping with which other pretty doctors and that's not a value judgment about "Grey's Anatomy" on any level. Here, the pretty doctors don't have time to flirt, but they periodically get sprayed by arterial blood, which never damages their prettiness. This is, as I said above, a good showcase for Luis Guzman, even if he dominates the pilot's opening minutes and then is essentially MIA or useless for the last 30 minutes. It's also a good vehicle for Marcia Gay Harden, who creates near-effortless authority with a bare minimum of character. [It's also funny to think that Harden was originally supposed to play the role now taken by Bonnie Somerville and that Harden's role was set for Maggie Grace.] The other actors are mostly just there and only Ben Hollingsworth leaves a negative impression, though I think that's just a poorly written character, rather than a performance problem.
Desire To Watch Again: Shrug. This is a decent pilot, but it's a decent in a genre that I haven't necessarily been missing in my viewing rotation. If you have? It's decent! "Code Black" looks good and has a couple good performances and assuming you aren't me, you probably won't be offended by the manipulative trickery in the last 15 minutes. I'll probably tune in for a second episode, but not necessarily a third.

Posted by Daniel Fienberg at 11:38 AM

Labels: Code Black, Take Me To The Pilots