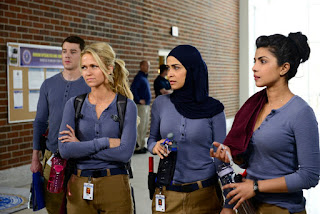 
Show: "Quantico" (ABC)
The Pitch: "How To Get Away With Domestic Terrorism"
Quick Response: "Quantico" is credited to Josh Safran, but this genetically engineered blending of "Grey's Anatomy"-style soapiness and "How To Get Away With Murder"-style non-linear mysteriousness against an FBI backdrop is almost hilariously test tube-bred for ABC's brand and schedule. Led by Priyanka Chopra, "Quantico" has a cast of obligatorily gorgeous people, many of whom are basically interchangeable with other gorgeous people you may have spotted on other TV shows, whether it's Johanna Braddy channeling Katherine Heigl, Jake McLaughlin continuing his role as poor man's Lee Pace and Graham Rogers, who I just assumed was Hunter Parrish for at least 10 minutes. The structure is totally "HTGAWM," with Chopra's character rising amidst the chaos of a major terrorist attack and being told that the suspect is one of the people in her FBI Academy class, at which point an agent pretty much says, "Try to remember everything that happened to you at the Academy," instigating the clunky flashbacks that required an almost unbearable amount of disbelief suspending, a mixture of details I assume really must have come up in Safran's research and leaps of logic that left me simultaneously questioning the intelligence of the people making the show and the people in the show, which isn't a good sign for a show that's theoretically about smart people. The flashbacks are still better than the post-attack "present day" footage, which suffers from shoddy special effects, a conspicuous lack of scale-capturing style and a total lack of urgency. If characters are dealing with a horrible attack and the flashbacks are meant to be interrogation/confession, you can't pause for characters to admire each other's towel-clad bodies and still have me taking your approach seriously. The appeal "Quantico" possesses comes almost totally from the cast. The camera likes Chopra, even if the writers don't quite share that appreciation yet. Braddy, Rogers and Yasmine Al Masri are also watchable. On the instructor side, Aunjanue Ellis is utterly wasted as one authority figure and Dougray Scott, not bad at all, was already recast (replacement unannounced), because recasting Dougray Scott is what Hollywood does. There's at least one awful scene between Ellis and Scott's characters in the pilot that rings false in terms of dialogue and development and also betrays the alleged integrity of the flashback structure. I hope it's removed. That can still be done. I wish any part of "Quantico" felt like it was being steered by a narrative imperative and not a network development note. That's probably a lost cause.
Desire To Watch Again: The only way "Quantico" could be more "ABC" would be if Shonda Rhimes' name were attached, which would also give me at least some hope for its ability bounce back from this pilot. Somehow, "Quantico" doesn't even end with a good cliffhanger, lurching five minutes past its biggest surprises to a shrug of conclusion. I'll be interested to see how the pilot is altered with Scott's replacement, but my interest beyond that will be only one episode if there's no improvement.

Posted by Daniel Fienberg at 10:04 AM

Labels: Quantico, Take Me To The Pilots