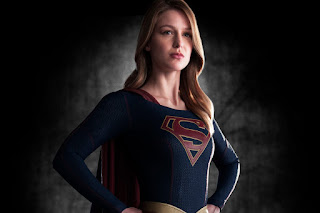 Show: "Supergirl" (CBS)
The Pitch: "Get your superhero drama right here! Get it while it's fresh! Recognizable superhero drama unassociated with any lead actor for nearly three decades... STEP RIGHT UP!"
Quick Response: The sense that this isn't a CBS show is pretty much impossible to shake. It's a CW show with a CBS budget, or maybe an ABC show, but from the side of the comic book empire that isn't ABC's corporate sibling. But whose business is it if "Supergirl" isn't on-brand for CBS? It's CBS' business and not mine. Ali Adler, Greg Berlanti and Andrew Kreisberg's take on the character is on the sunny, frothy side of superhero coin, with more smiles and toss-off jokes than 13 episodes of deceased DC stablemate "Constantine" and possibly more than three seasons of "Arrow," excluding Felicity scenes. The unassuming-nerd-finds-voice-in-heroism vibe is very close to that of "Flash" with two key differences: "Flash" always had a core of sadness courtesy of the death of Barry's mom, while "Supergirl" has less gravity despite the backdrop of an entire eradicated planet. And second, this IS NOT an origin story, at least not entirely. Kara Zor-El was raised knowing she had powers, but opted to hide her light under a bushel. So there's minimal dilly-dallying with, "Oh, I have powers? I can do THAT?!?" It's mostly, "I've had powers, but perhaps I need practice to fulfill my potential" which makes for a different and welcome dynamic. Melissa Benoist, who was winsomely effective in "Whiplash" and kept me watching "Glee" at least two episodes longer than I should have, is an appropriate lead for the low-intensity fun here. She doesn't wow you, but I think she makes Kara relatable and human in a way that might be more important than wowing. She's got solid chemistry with the very appealing Mehcad Brooks, the fairly funny Calista Flockhart and also with Chyler Leigh, who mostly survives the responsibility of dumping a massive amount of exposition here. I was less convinced by Jeremy Jordan as Kara's Cisco and could have done without the pandering Helen Slater/Dean Cain cameos, but pandering is a not-insignificant part of what "Supergirl" thinks it has to do. I liked the blending of soft-sell and hard-sell empowerment messages, thought the special effects were on the upper edge of expectations and got some decently earned emotions courtesy of the score. "Supergirl" has a good mixture of blatantly comic book tone with shades of grounding, without ever getting too dark or brooding. It's a daytime, outdoor superhero show, at least in the pilot. Perhaps budget necessities will force them onto stages and into the forgiving darkness of night eventually. Oh and while the initial "Supergirl" trailer had the misfortune of coming fast on the heels of the "SNL" "Black Widow" spoof, it was mostly awful trailer soundtrack choices that led people to make that overly facile comparison. The music choices in the actual series is much less a hacky Katherine Heigl rom-com and much more "Devil Wears Prada" if Anne Hathaway had superpowers, a different thing entirely. The "Supergirl" team should already resent the CBS marketing team for that blunder.
Desire To Watch Again: I'll happily watch additional episodes of "Supergirl." There's some predictable pilot clunkiness and excessive underlining of theme and whatnot, but by pilot standards, it quickly settles into a tone and a style and I reckon those are reproducible. I don't quite know what the week-to-week series is and that may be where the CBS-ness of it becomes a worry, but Berlanti and Kreisberg know how to do superheros and Adler's background on "Chuck" really ought to be a perfect training ground for what "Supergirl" ought to be moving forward. So really, maybe we should be comparing "Supergirl" to "Chuck" instead of "The Flash"? Either one is optimistic.

Posted by Daniel Fienberg at 10:46 AM

Labels: Supergirl, Take Me To The Pilots