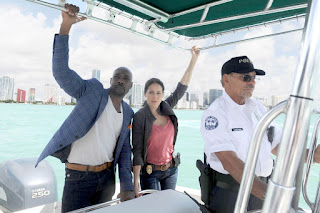 Show: "Rosewood" (FOX)
The Pitch: "We need something to air with 'Empire.'" "Something compatible?" "Meh. Only on the most superficial level."
Quick Response: Not to accuse FOX of scheduling-by-profiling, but "Rosewood" has essentially been scheduled in a slot paired with breakout smash "Empire" because star Morris Chestnut is African-American and not because anything in the tone, style, structure, pacing or... anything is really joining the shows together. Despite the Miami setting and occasionally flashy director Richard Shepard behind the camera, "Rosewood" is a pretty bland affair, more compatible with TNT or Blue Skies USA's brand of procedurals than any recent FOX successes in general or FOX's midseason breakout Wednesday smash "Empire" in specific. Chestnut's Dr. Beaumont Rosewood, Jr. -- it's a name that stays hilarious in each nickname and variant -- is a Private Pathology Consultant, something I know both because the character puts up billboards all around Miami and because he has to keep repeating his professional specifics, because if you don't remember those key distinctions -- "private" and "consultant" in particular -- you'd never guess what the hook was that attracted creator Todd Harthan to this character and this world. The point is that "Rosie" doesn't work for the Miami PD, but he often works with them, so it's a different relationship than it would be if he were just a police pathologist. And because he's able to take his money and channel it directly into his business, he has fancy toys which, at least in the pilot, are only a little thrilling. "Rosewood" may conceivably be hamstrung by being too pseudo-realistic, because nothing Rosie does in the pilot is anything you haven't seen a TV pathologist do before, usually with fabulously flashy gizmos that don't exist yet. But Rosie does it and you go... Shrug. Rosie is also, to put it kindly, really annoying. He's got an array of medical issues that leave him talking about how much he loves life and savors each moment, but he does it with a cocky, optimistic smugness that we're supposed to find lovable because they're coming from Morris Chestnut. And I guess I'm pleased that this is the meatiest role that Chestnut has been given in years and he surely has the swagger of a star, but I don't think the admire-to-pity-to-empathize ratio with Rosie is properly calibrated in the early-going, especially as relates to the supporting characters. I didn't buy his interest in newly returned Miami Detective Villa (Jaina Lee Ortiz), which is bad because it's one of the character's key humanizing relationships. His care for a young girl in his building -- "Ben & Kate" vet Maggie Elizabeth Jones' Bella -- is just straight-up pandering and never feels developed. And it's hard to get what's happening with Rosie's grumpy mentor, played by Clancy Brown. These relationships all fail even though the characters are all reading expositional dialogue at each other, announcing each other's credentials and whatnot. At every stage, I think this pilot needed more development, but FOX needed contenders to go with "Empire" even more.
Desire To Watch Again: Almost none. If the clunkiness and kinks get worked out, I'm still not sure that "Rosewood" plays as more than a generic procedural and it's nowhere near that yet. Some viewers, though, will probably appreciate Rosie's optimism over the familiar House/Rake FOX procedural grumps. And plenty of viewers will be happy just to look at Morris Chestnut. So be it.

Posted by Daniel Fienberg at 10:48 AM

Labels: Rosewood, Take Me To The Pilots