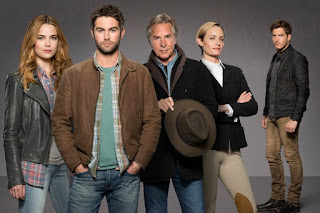 Show: "Blood and Oil" (ABC)
The Pitch: "Oil Tree Hill" has replaced "The Nate Archibald & Cappie Oil Hour" as my title for this one.
Quick Response: "Blood and Oil" may be my biggest disappointment of the fall, but it's entirely possible that the disappointment is built entirely on my flawed expectations and not on the series itself. I've seen "The Overnighters" and several other New American Boomtown documentaries, so I know that there's an awesome, high-stakes human story developing in the Dakotas that can be told sensationally with only minor soap-y embellishment, think "Deadwood 2015." But "Blood and Oil" wants to be "Longitudinally Elevated Dallas" and nothing more. It's a choice that is totally valid, but if you go in wanting cable-style nuance and grounding from "Blood and Oil," you'll probably laugh for five minutes and quit. If you go in expecting "Nashville" -- a more logical expectation, I admit -- well, there's guilty pleasure potential here, I guess. [Note that for a soap opera, "Blood and Oil" isn't vaguely steamy. Dunno if that's a directing problem, a lack of chemistry between actors or what.] If "Blood and Oil" wanted to be better, it needed a leading man less bland than Chace Crawford though, in the interest of full credit, Crawford is more plausibly human here than he ever was on "Gossip Girl." Scott Michael Foster fares a bit better because Cappie is playing Evan -- You're welcome, "Greek" fans -- or at least Unreconstructed Evan, as a petulant rich boy with daddy issues. The high stakes -- it's right there in the title -- don't give Rebecca Rittenhouse the chance to showcase the humor that was her best asset on "Red Band Society," but she's still got a '50s ingenue kinda wide-eyed expressiveness about her that I dig and that could find purchase here. Early footage made it look like Don Johnson was playing the JR here, but at least in the early going it's nothing nearly that fun, but at least he's sturdy. Delroy Lindo is horribly, tragically, inexplicably underused in the pilot, but "Horribly, Tragically, Inexplicably Underused" could be the title of Delroy Lindo's autobiography. I recommend more Delroy Lindo going forward. I also recommend either steering away from the Native American stuff or doing it better, because the line "Whoever kills a spirit animal is cursed" from a never-seen-again NA character got my biggest laugh from any drama or comedy pilot this year. There are a lot of giggles in the "Blood and Oil" pilot, actually, a lot of heightened drama moments that play a bit more silly than perhaps intended, but one man's giggle is another man's (or woman's) giddy glee when it comes to slo-mo flipping cars or grown men mud-wrestling. At least the reactions are visceral, eh? I mean, I wanted provocative and "Blood and Oil" provokes.
Desire To Watch Again: Now that I know not to expect "Oil Tree Hill" to be GOOD, I'm perfectly willing to watch a couple more episodes. I watched two seasons of "Revenge," three seasons of "Nashville" and I'll watch some of this as well for the parts of the cast that I like. The pilot also ends with a good cliffhanger, or at least a cliffhanger that I'm curious to see resolved.

Posted by Daniel Fienberg at 12:36 PM

Labels: Blood and Oil, Oil Tree Hill, Take Me To The Pilots