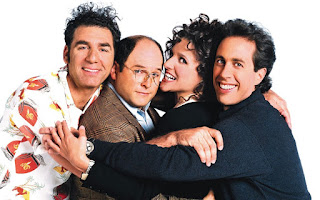 I've been thinking, as you do, about fun things I could do on this blog to keep it chugging along and perhaps to accelerate the chugging.

Live-blogging "House Hunters" and "Househunters International" seemed like an idea, though I'm not sure I've ever watched a new episode "live," so probably that's not going to be functional.

Another idea struck me as I was eating a small bag of pretzels sent to me by Hulu:

For the duration of the podcast (but actually long before that), it has been a running joke that "Dan hates 'Seinfeld.'"


This is, of course, a small exaggeration. I don't hate "Seinfeld." I would never hesitate to respect its influence and there have been episodes that I've liked or appreciated on intellectual levels. I also mostly love "Curb Your Enthusiasm," which is essentially "Seinfeld," only with all of the people who annoyed me replaced by people I apparently like more.

I've also acknowledged, without hesitation, that it's not like I've seen EVERY episode of "Seinfeld." I suspect I've watched maybe... Half of the show's 180 episodes? And I certainly haven't seen all of the episodes consecutively, which I'm sure means I've missed much complex ebb and flow of mythology and whatnot.

There's never been any imperative reason to catch up. Or time.

Is there an interest in a "Seinfeld" episode-by-episode journey?

It would either be a 180-post expansion on why "Seinfeld" just doesn't work for me -- clearly I just don't get humor with a Northeastern Jewish slant -- or perhaps an extended conversion experience.

Posts might only be a paragraph or two per episodes, general reactions, amusement, annoyance, whatever.

And I could either get tired of the game when it turns out that nobody is reading the posts or when somebody gives me a job that leaves me sufficiently busy that quitting is the only option.

But the bigger question is:

Posted by Daniel Fienberg at 2:44 PM