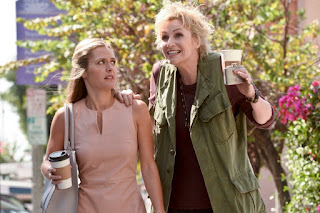 Show: "Angel From Hell" (CBS)
The Pitch: "She's the original angel from hell!" "You mean Lucifer?" "No. That's on FOX. This is more like 'Cupid' only with guardian angels."
Quick Response: I talked about "The Grinder" as a pilot-y pilot, but "Angel From Hell" makes "The Grinder" look structurally relaxed and easily repeatable. The 22-minute running time of "Angel From Hell" is about justifying why, on even the lowest level, Type-A dermatologist Allison (Maggie Lawson) would believe that alcoholic farmer's market busker Amy (Jane Lynch) might conceivably be less a loud, grating stalker and more a benign guardian angel breaking some sort of karmic edict for some reason to directly intervene in her life. Confession: I can't really distinguish between a guardian angel and a fairy godmother, but I'm not sure "Angel From Hell" can either, but it's making it up as it goes along and repeating certain things -- Allison thinks Amy is a stalker, Amy likes creme de menthe, something about safeguarding journeys through worlds -- almost as a distraction mechanism. Allison's incredulity has to be eased with a pilot plotline that generates a much-desired "Traffic Light" reunion, but also features two characters who, at least so far as I know, may never return again. That's not a great decision, because it leaves all of the other characters either really broadly sketched or negligible. Eventually, Lynch's Amy may make the necessary transition from irritating to fought-around-the-edges-potential-spiritual-guardian, but that doesn't happen in the pilot. And as much as I like Maggie Lawson -- "Back in the Game" is one of the most peculiar not-given-a-shot cancellations in recent years -- she's just playing "workaholic girl who doesn't know how to have fun" here. The couple details people mention about Kyle Bornheimer's character have seemingly no connection to what he's playing. It's frustratingly inevitable, because the premise is indefensible in literal terms, but they have to lay the foundation for it anyway and you know that Allison's going to semi-accept Amy, but the way it goes down is perfunctory and laugh-less. I'm not a fan of premise pilots that are like inoculations: "You might be a little sore, but at least we don't have to go through this again." When you get a pilot like "Angel From Hell" or "The Grinder," I almost wish the networks would put them online, but never air them and skip straight to Episode 2. Like, "Look, you don't really care how we got here, but if you do... Go online and watch the original pilot as background information, but otherwise you can just assume what happened and get into the series." Pilots like this are useless. They get you where you had to go anyway, but they do it without enough amusement to be worth even the 22 minutes.
Desire To Watch Again: I'm perfectly game to watch Episode 2. The pilot was pointless, but not painful. Or if it was briefly painful, at least it passed fast. Now give me the show. I almost can't give an opinion based only on this one episode. Is "Be better next week" an opinion? There you go. This sure won't hook anybody, but it has talented people, so maybe the real show will be good? Just me being an optimist, as usual.

Posted by Daniel Fienberg at 10:50 AM

Labels: Angel from Hell, Take Me To The Pilots