Take Me To The Pilots '15: FOX's 'Grandfathered' 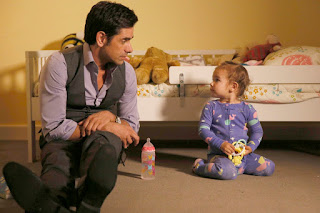 Show: "Grandfathered" (FOX)
The Pitch: "Less Full House"
Quick Response: Yes, it's a premise pilot -- playboy restauranteur discovers he's a father and a grandfather at the same time -- but the premise is established within THREE minutes and then nobody questions it again, which I found to be a tremendous relief. A lot of the show hinges on John Stamos' Aging Ken Doll charisma and the inherent cuteness of Stamos+Child, something fans of "Full House" have never doubted. But there are a lot of other things happening in "Grandfathered," including instantly solid supporting turns from Josh Peck and Paget Brewster, who both have something resembling characters in very short order. In fact, "Grandfathered," also makes sure that a couple members of Stamos' uber-diverse restaurant staff -- Kelly Jenrette and Ravi Patel in particular -- get laughs of their own in the pilot. And when that already-deep ensemble runs the risk of fatigue, there's a cute toddler who can run around for 10 seconds and at least get a guaranteed smile. I like that several characters have several layers of things they want and need within 22 minutes and, in contrast to FOX's other Tuesday comedy, this pilot felt like it went by pretty quickly. Created by Daniel Chun and directed by Chris Koch, "Grandfathered" has solid comedic rhythms, some not-unearned dramatic beats and it gets some value out of its Los Angeles locations, both exteriors and also the ridiculously posh apartment where our main character lives. "Grandfathered" also features one of the oddest celebrity cameo trios imaginable, as well as at least one less surprising cameo. It helps that I watched "Grandfathered" on the heels of a bunch of episodes of FX's similarly themed, but also pretty dismal, "Sex&Drugs&Rock&Roll." "Grandfathered" is funnier and more likable than a lot of things I might compare it to.
Desire To Watch Again: Stamos hasn't had the best of summers so far and while FOX hasn't given any indications that "Grandfathered" is being delayed, I'm curious how it'll be ready for September, but that's not at issue here. I'd certainly watch another few episodes of this one and this may be decent enough to buy "The Grinder" an extra episode or two out of proximity. I like Brewster. I'd like for the talented Peck to get a good vehicle. And I'm fine with Stamos. This could have some potential and in a rough season for new shows, that's not a small compliment.

Posted by Daniel Fienberg at 10:44 AM

Labels: Grandfathered, Take Me To The Pilots